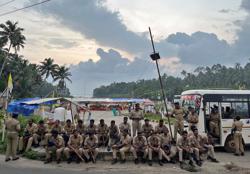 Visitors pose for pictures in front of an art installation next to a Durga Puja pandal (temporary structure) in Kolkata on Oct 4. Photo: AFP

Spirits are soaring in India's "City of Joy” as tens of thousands of people jostle on Kolkata's streets in celebration of "Durga Puja,” the most important festival of the Bengali community.

The five-day festival that began Saturday is marked by prayers to the Hindu goddess Durga, feasts, rejoicing, music, dance and drama marking the victory of good over evil. People visit richly illuminated and decorated community centers with idols of Durga and other goddesses worshipped by the Bengali community.

This year's Durga Puja in West Bengal state in eastern India comes after two years of pandemic curbs on large gatherings and follows Unesco's recognition of Kolkata's festival as part of the "Intangible Cultural Heritage of Humanity.’’

Artists began preparing for the festival months ago by making thousands of clay idols in Kumortuli, the oldest potters’ colony in Kolkata.

The art district has mushroomed in an unplanned way in congested narrow alleys and lanes on the eastern bank of the Hooghly River. Studios dot the area with no concrete construction or proper doors. The artists use the space as their home-cum-studios with common facilities.

With their work growing in popularity, the artisans have introduced fibreglass idols and and export miniature idols of Durga to Britain, the United States, Japan, Bahrain and other countries.

The work begins with a skeleton of bamboo and wood, which the artist methodically binds with paddy straw to give it a human shape. The artist then places clay over the human-shaped dolls.

The faces of the idols are moulded or even handcrafted. The clay is collected from the Hooghly River and mixed with small hay pieces and wood dust collected from sawmills. The artists paint the idols in colours chosen by their customers.

The UN cultural agency last December included the Durga Puja in Kolkata on the Representative List of the Intangible Cultural Heritage of Humanity.

Kolkata was nicknamed "The City of Joy" after a 1985 novel by Dominique Lapierre with the same name that was adapted as a film by Roland Joffé in 1992. The theme centred on people's joyous spirits overcoming hardships. - AP 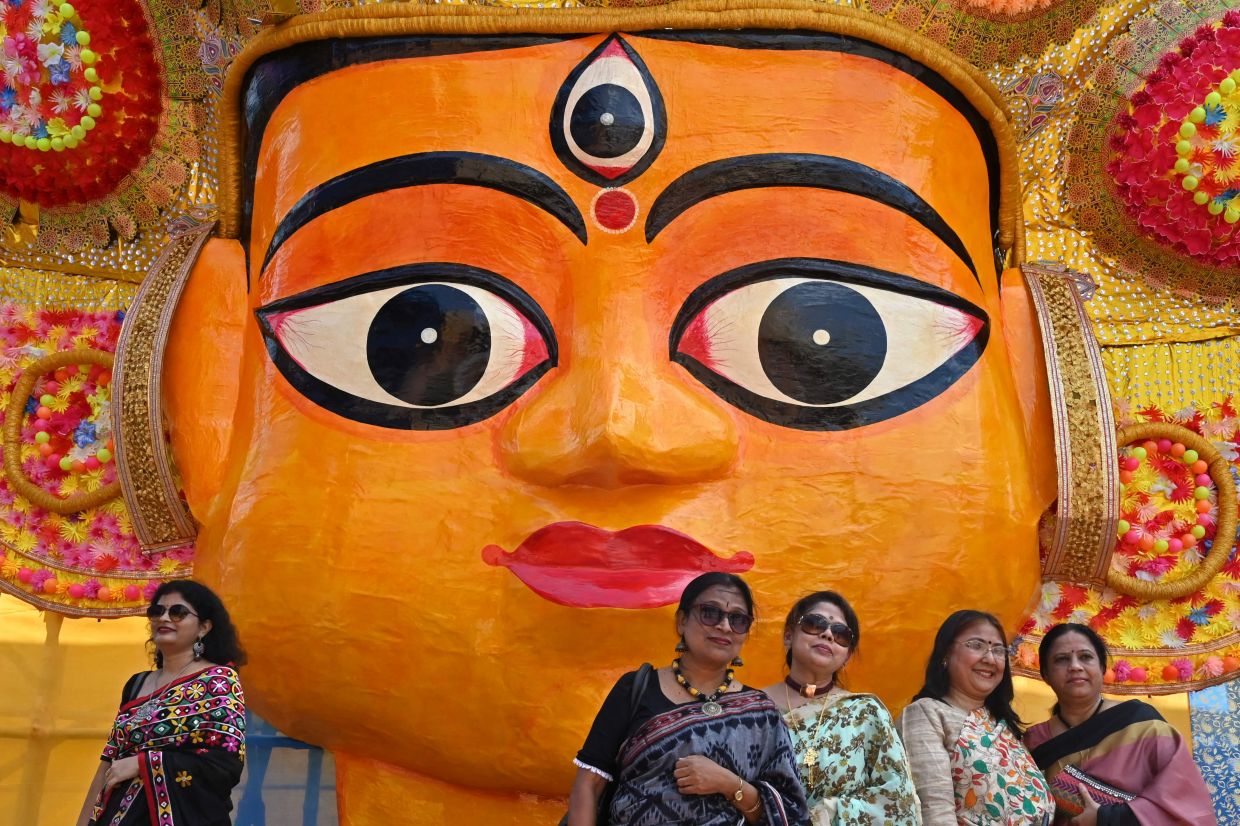 Visitors pose for pictures in front of an art installation next to a Durga Puja pandal (temporary structure) in Kolkata on Oct 4. Photo: AFP

A young girl sits next to the idol of Hindu Goddess Durga at a pandal in Kolkata on Oct 4. Photo: AFP

An artisan prepares an idol of Hindu goddess Durga ahead of the Durga Puja festival at Kumortuli, the potters' place, in Kolkata, India. Photo: AP

Workers unload a clay idol of Hindu goddess Durga from a truck to place at a worship site ahead of Durga Puja festival in Kolkata, India. Photo: AP

An artisan works on an idol of Hindu goddess Durga in Kolkata, India. Photo: AP

The five-day festival commemorates the slaying of a demon king by goddess Durga, marking the triumph of good over evil. Photo: AP