'It’s the same style as The Carpet Merchant, but more mature,' says Yee about her new webcomic 'Alexander The Great'. Photo: Reimena Yee

“Now, my friends tell me. Have you – with your two eyes and two ears and one voice – ever known a king such that the world had never seen before... and never will again? You may already know hm by one of his many names and many faces: Zulkarnain. Alisaunder. Alexandrias. Sikander.”

Thus begins Alexander, The Servant & The Water Of Life, the latest webcomic by Eisner Award-nominated comics creator Reimena Yee, which she describes as a “21st Century Alexander Romance”.

So, what is a Malaysian comics creator doing writing a historical epic about an ancient Macedonian king? That was the first thing that came to my mind when Yee first told me in 2018 back about her plans to follow-up her Eisner-nominated webcomic The Carpet Merchant Of Konstantiniyya with said project.

Three years after she first mentioned the project, Yee has finally released the first chapters of this new project online here.

In an email interview, Yee, who is primarily based in Melbourne, Australia, said her fascination with Alexander began in 2017, through Indian author Kanishk Tharoor’s collection of short stories, Swimmer Among The Stars.

“Tharoor had written his own take, specifically on the Persian Alexander Romance, which featured Iskandar travelling the world, diving under the sea in a glass jar, waging a war on fairies and djinns, and entering a land of eternal darkness for the water of life,” she says.

“At that time I had almost no knowledge of who Alexander was as a historical figure, so I was amazed that there was this body of legends and folklore associated with him.

“And it wasn’t just Persian, it was international and interfaith – Alexander has made appearances in the Bible, the Quran, European chivalric literature and even in Nusantara with our very own Hikayat Iskandar Zulkarnain.” Fans of Yee’s work will immediately recognise her distinctive cartoonish, fairytale-like style, and her a rich attention to detail. Photo: Reimena Yee

Once she understood the breadth and richness of the history behind Alexander’s legacy, the 26-year-old creator from Kuala Lumpur felt “compelled to contribute to this almost 2,000-year-old chain of storytellers with my 21st century retelling”.

“I am exploring the diverse representations of Alexander by storytellers and historians across cultures and time periods, and how his legacy has transformed over time as the meaning of power evolves and our values as a society changes,” she says, adding that this will not be like any romance about Alexander that has been done before.

“I am actually using the folklore about him as a framing device, a lens through which the readers and I can critically examine and deconstruct Alexander’s life story. It’s going to be absolutely wild going through thousands of years of art and literature. We’re going to build up and break down this ancient Greek statue into something flesh and bones!”

Fans of Yee’s previous works such as The Carpet Merchant Of Konstantiniyya and The World In Deeper Inspection will immediately recognise her distinctive cartoonish, fairytale-like style, and her a rich attention to detail.

“It’s the same style as The Carpet Merchant, but more mature. I am aiming for something that evokes old fairytale illustrations and the early 20th century symbolist art movement, as well as the strange dreamlike surreality of films like The Decameron, Black Narcissus and Satyricon,” she said. The lighter side of Yee

Yee’s output does not merely consist of historical epics though. Last year, she released Seance Tea Party, her debut children’s graphic novel, about a lonely 12-year-old girl, Lora who is afraid of growing up, and ends up making friends with a ghost.

She also co-wrote a comic with Philippines-born comics artist Tintin Pantoja, called The Maker’s Club, a book aimed at readers aged nine to 14 that deals with entrepreneurship, creative burnout, and adaptive fashion design. Book two of the series, The Makers Club: Starting Up!, was released in June this year. ‘I am actually using the folklore about him as a framing device, a lens through which the readers and I can critically examine and deconstruct Alexander’s life story,’ says Yee. Photo: Reimena YeeLast week, Yee also announced she had completed her new middle-grade adventure graphic novel My Aunt Is A Monster, which is scheduled for a 2022 release. It is about a blind girl writer and her (formerly) "World’s Greatest Adventurer" aunt with a big secret.

According to Yee, getting to work on these “lighter” projects can be a way for her to take a break from the heavier stuff.

“Though I tend to give all of my works the same amount of care and thought, the nice thing about these lighter projects is that they don’t require much intense academic reading,” she said.

“Historical fiction books like Alexander and The Carpet Merchant have a somewhat different process, almost like writing a thesis. With a lighter project, I can easily give my brain a break and treat the work solely as storytelling.”

Indeed, part of the reason she took so long to launch the Alexander project was because of the sheer amount of research she had to undertake first, especially since this is a story based on a real life historical figure.

“I had to research not just Alexander’s biography, but the cultures and people who influenced him,” she explained.

“Beyond that, I had to research his influence on cultures and people during the past 2,300 years. It’s mind-boggling and frustrating, to put it lightly.

“Fortunately, I am collaborating with Richard Stoneman, who is my consultant and the foremost expert on Alexander and the Alexander Romance, so I always have him to check my work.”

At the time of writing, only the prologue and part of Chapter One has been published, and Yee has planned for the story to go on for at least four volumes.

“I am hoping to finish it within four years, before my 30s! But we’ll see. The journey takes as long as it needs to,” she concludes. 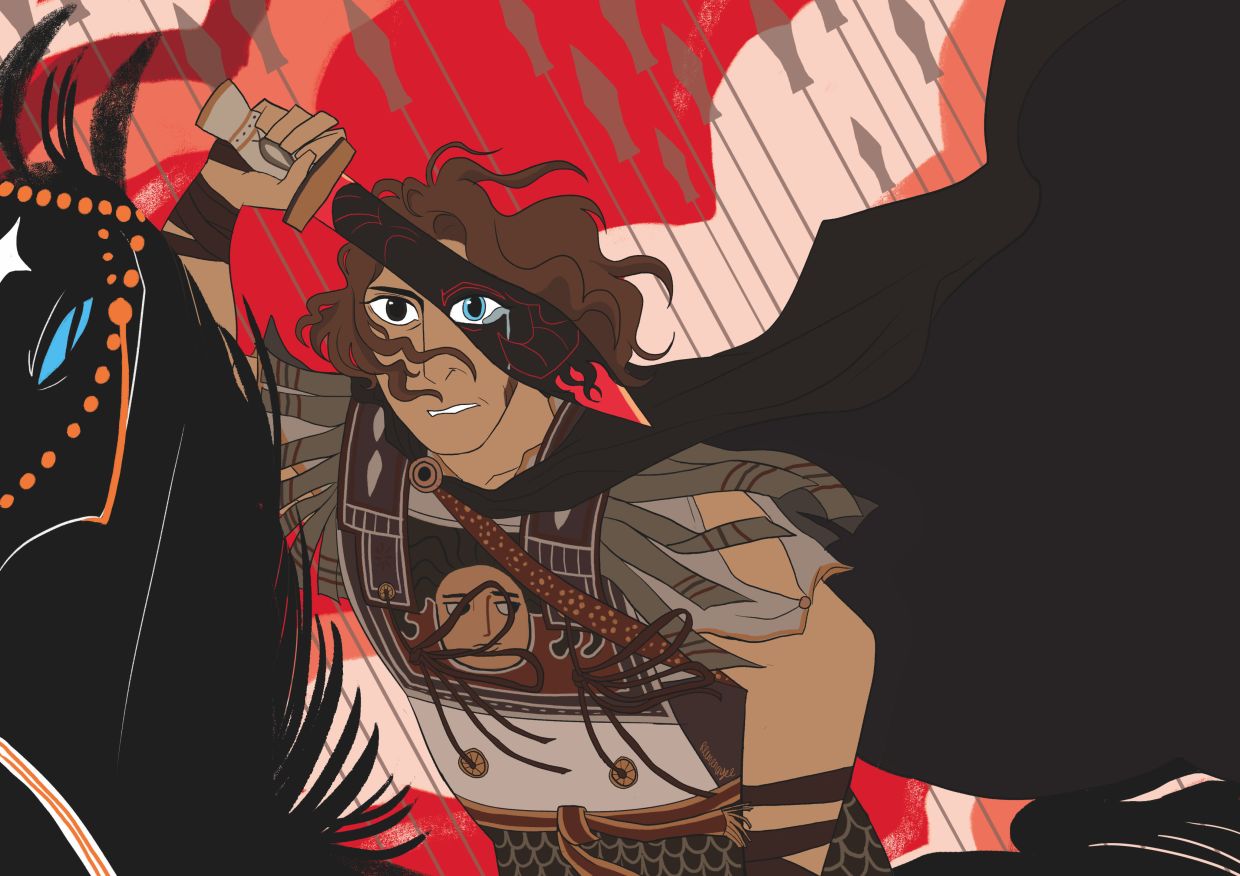 'It’s the same style as The Carpet Merchant, but more mature,' says Yee about her new webcomic 'Alexander The Great'. Photo: Reimena Yee

Fans of Yee’s work will immediately recognise her distinctive cartoonish, fairytale-like style, and her a rich attention to detail. Photo: Reimena Yee

Yee (far left) and Alexander’s friends celebrating the release of Chapter One as well as in honour of Alexander’s 2,377th birthday on July 21.

Yee's Eisner-nominated webcomic 'The Carpet Merchant Of Konstantiniyya', which was released in print last year.

‘I am actually using the folklore about him as a framing device, a lens through which the readers and I can critically examine and deconstruct Alexander’s life story,’ says Yee.