Lefty’s on-site exhibition 'Sama-Sama: A Multi-Cultural Art Journey', which was supposed to show at George Town Festival, has been postponed to a later date. Photo: Lefty Kam

After a career that has taken him from Singapore to Shanghai, comic book artist and illustrator Julian Kam, better known as "Lefty" in the art scene, has come home to Penang.

He is taking a break from zombie superheroes and mutating germs to document a series based on childhood experiences and places.

From his Sama-Sama: A Multi-Cultural Art Journey exhibition, to contributions in Dr Kuah Li Feng’s I Am Home series, Lefty has been spending these pandemic months exploring what it means to be Malaysian, a Penangite and the meaning of being truly at home.

His new works for the on-site exhibition Sama-Sama were supposed to be one of the highlights at the George Town Festival, which opened last weekend. But the exhibition has now been postponed.

Lefty hopes that the public will get a chance to visit the exhibition at a later date this year.

Born in Air Itam in 1969, Lefty attended SJK(C) Union before heading to Chung Ling High School for his secondary education.

Drawing from an early age, Lefty remembers his father sourcing scrap paper from wherever possible for his son’s sketching time.

“I have been doodling from the day I could hold a pencil and always telling stories through my drawings.

“To keep me from vandalising the house walls, my dad – a government servant who worked as a photographer in the Jabatan Penerangan (Information Department) – had to bring back recycled papers from wherever he could find them,” he recalls. Lefty hopes that his now postponed 'Sama-Sama' exhibition will get a chance to shown once the pandemic situation improves. Photo: Lefty Kam

In the early 1990s, Lefty left Penang to complete his (art school) studies at Saito College in Petaling Jaya.

“The comics industry was small and not so accessible in the early 1990s, so my plan was to work in advertising and work on comics during my spare time.”

Lefty’s career started moving forward when he was offered a position at Art Square Group, a local publishing company better known by its Gempak Starz brand, named after its groundbreaking Gempak info-comics magazine.

“At the peak of my career, I was handling three bi-weekly magazines at the same time. It only started to slow down when I left for Singapore to join publishing company Storm Lion in 2008,” he says.

Local comics, according to the artist, have since focused on young readers, who prefer the manga format.

“Story-based comics or graphic novels for older readers have become niche today while teens and above will read comics online from various platforms, mostly for free,” states Lefty.

His time at Gempak Starz (now officially rebranded into Kadokawa Gempak Starz) had, however, one lasting legacy.

Lefty, who prefers Batman over Superman, met and became close friends with artists Michael Chuah of Gengkey fame and Chin Sau Lim (also known as Slaium) during his time at Gempak Starz.

Bogged down by management duties, the trio realised they needed a creative outlet for themselves. Gilamon Studio's 'Major Zombie: Love And Loss' from 2011, which introduced the masses to Lefty's Major Zombie character (which he created in 2003). Photo: Filepic

“Gilamon was founded for us to do creator-owned comic IPs (intellectual properties) but we were also careful to avoid any conflict with the company we were working for,” says Lefty.

The group concentrated on English comics targeted at older, mature audiences. The first publication, released in August 2003, was entitled Gilamon Magazine #0 that introduced the characters Major Zombie, created by Lefty, Cyber Merkaba by Chin and the Collector by Chuah respectively.

“All our first publications were also done by hand, with us photocopying, cutting, stapling and copying the magazines ourselves,” he laughs.

In 2006, the group emerged victorious at the Malaysia Digital Economy Corporation (MDEC) Intellectual Property Creators’ Challenge (IPCC), using their winning grant to publish a collection of all previous Gilamon comics.

Around 2010, Tan Eng Huat – one of the country’s most successful comic artists with portfolio stints at Marvel and DC – joined the mix in time for Gilamon’s first graphic novels – Major Zombie: Love & Loss and Six: The Rebirth; both were released together.

In 2012, Lefty and Tan also hit Comic-Con International in San Diego, travelling with a group from MDEC.

“I think the best parts were attending the panels and talks and getting to listen to the top industry players. At that time, it wasn’t so easy to just turn on YouTube and get to watch everything,” says Lefty.

Though the group’s projects are now sporadic, Gilamon remains a recognisable name in the region’s comics scene.

In 2010, Lefty returned home to Penang after his short stint in Singapore and lectured part-time at The One Academy.

Fellow Gilamon artist Tan had also picked up and moved to Shanghai and invited Lefty to come and try his hand in China in 2017.

“He was already working for Left Pocket Animation in Shanghai and I accepted his invitation to take on the challenge of becoming the editor-in-chief for the new comics division. 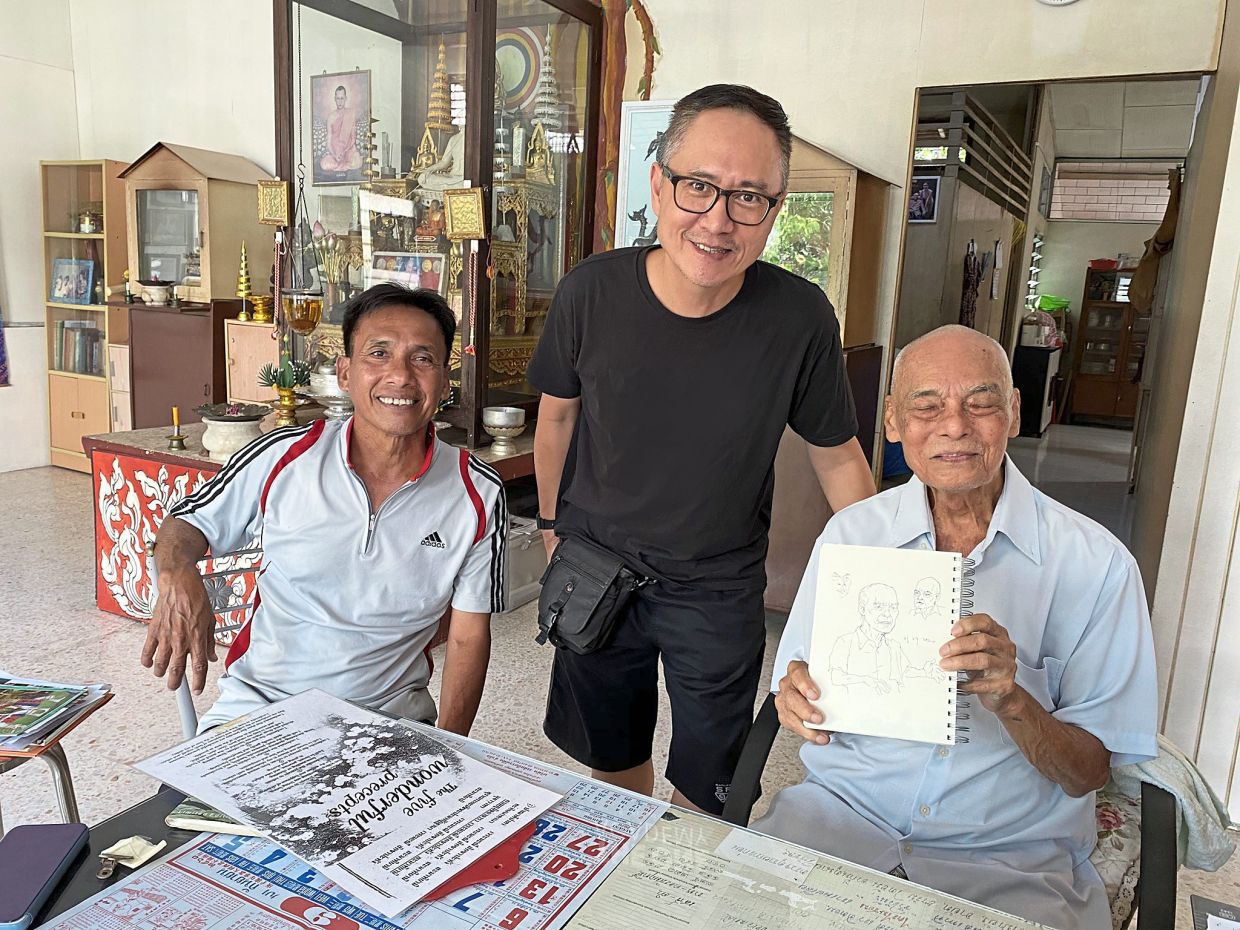 Lefty (centre) visiting Thai Menora legend Pak Wandee (right) and his son Boon Leua in Pulau Tikus for the 'I Am Home' project, an online exhibition, last year. It features multicultural narratives of home-making in Malaysia. Photo: I Am Home Project

“Language-wise it wasn’t that hard as I am fluent in Mandarin and the ‘Left’ in the company name was a nice coincidence,” says Lefty, who is indeed left handed.

A tightening of visa restrictions in China proved a challenge for Lefty who eventually grabbed an offer to open a local branch for Left Pocket in Penang.

Lefty completed his contract with Left Pocket in May last year and found himself in his hometown in the middle of a Covid-19 lockdown.

“I thought that maybe it was finally time for me to look at George Town (project). I’ve always wanted to explore George Town but where to start?” says Lefty.

A friend mentioned a Cendana (Cultural Economy Development Agency) grant that was up for grabs and Lefty decided to go for it. With the assistance of local cultural scholar Dr Kuah, who has collaborated with Lefty on several cultural projects over the last decade, he settled on the idea of looking at multiculturalism in the heritage city.

When travel restrictions eased, Lefty hit the streets (and the North Channel on the ferry) and Sama-Sama: A Multicultural Art Journey started to come together.

“Being an artist, my area of work is in comics primarily and a few years back, I found out about a method of comics called documentary comics.

“It basically means to go and observe the subject, collect data, do research and with the facts, create stories to deliver the message that you want to deliver,” says Lefty.

Coupled with sensory ethnography, a method suggested by Dr Kuah in which Lefty used not just his sight but other senses like smell and taste while collecting data, the duo settled on three themes for the project – On A Ferry, Seaside Coffee Stall and Men On Wheels.

In black and white with blots of yellow ochre thrown in here and there, each theme is captured in two parts: large overall panels and accompanying short stories.

All in the same boat

On A Ferry follows a young boy and his father on an island-bound ferry across the strait, while the second theme focuses on a food stall at the end of Greenhall.

“The coffee stall wasn’t in one of the hotspots that we had discussed, but the thing about research and going down to the field is that you will discover more things when you are there.

“I was walking around and rediscovered the place. It’s not a stall with fantastic food, but it is a place where people can relax, sit at the roadside, have a cup of coffee, a nasi lemak or kuih,” says Lefty, who is familiar with the area from his schooling days.

The stall also provides a special “service” for those fishing on the rocks just behind the stall, in which their “tapao”-ed (takeaway) drinks in plastic bags come in loaned koleh (large mugs) which would later be returned to the stall.

“This is all very unique and the warmth of the environment of Penang coming from a multicultural, multiracial community is clear,” says Lefty, noting that the clientele of the coffee stall came from all walks of life while the Indian owner of the stall was assisted by a Chinese uncle.

From the trishaw to the bread man to makeshift wagons fashioned for collecting recyclables, Lefty captures some of the many types of tricycles found in the city.

“When the roti (bread) man comes ringing the bell, everyone will come. I think everyone in the country has experienced buying bread from a roti man. When I was young, my mother would give me some money and say ‘go and buy bread’.

“With the balance, I’d sometimes get something for myself, which is the nice thing about the roti man – he will always have tidbits for you,” says Lefty, smiling.

Of the three themes, Lefty goes on to say that the ferry probably felt the closest to his heart.

“Amazingly, when I did the ferry drawing, it came out quite naturally, mainly because I have a lot of memories of it.

“When you are on a ferry, whether you drove there or are a pedestrian, everyone goes to the front when the ferry takes off.

“There is no distance between people regardless of race or status, everyone goes to the front deck and enjoys the sea breeze. We are all in the same boat,” says Lefty.

Coincidentally, the iconic ferries of Penang were discontinued at the end of the last year just after Lefty finished his research.

“It is the end of an era for many of us. There is a lot of nostalgia in this series,” he concludes. 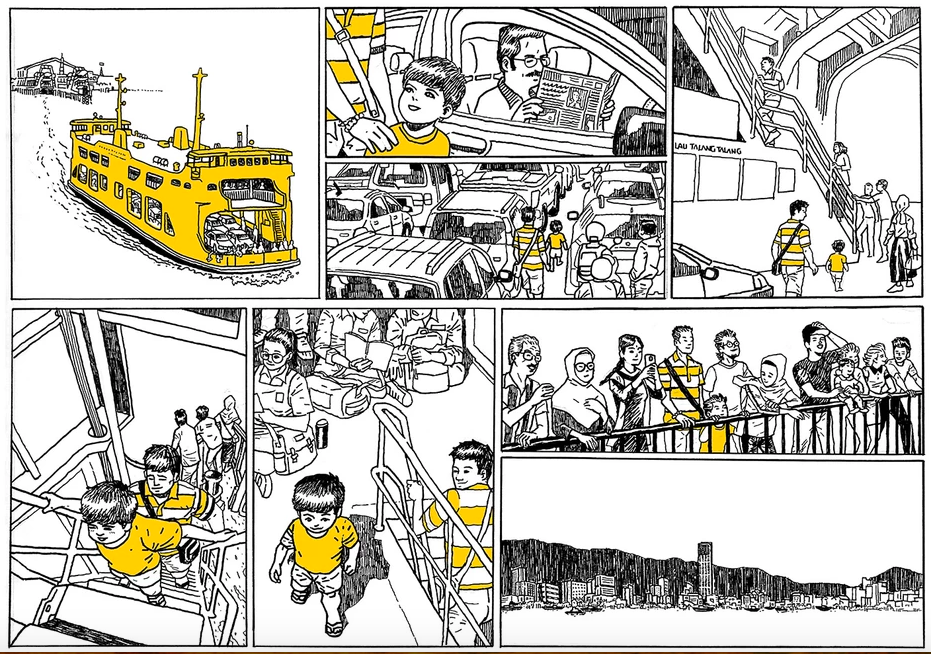 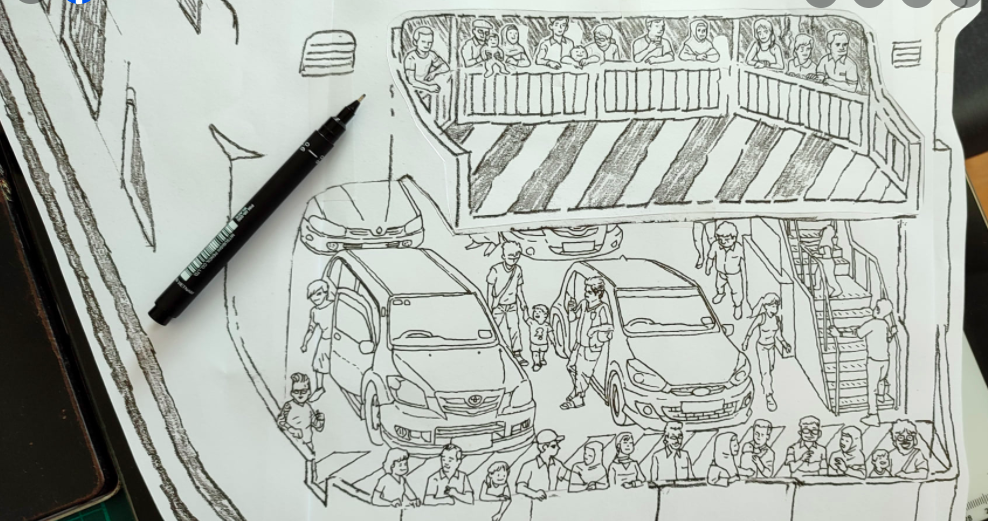 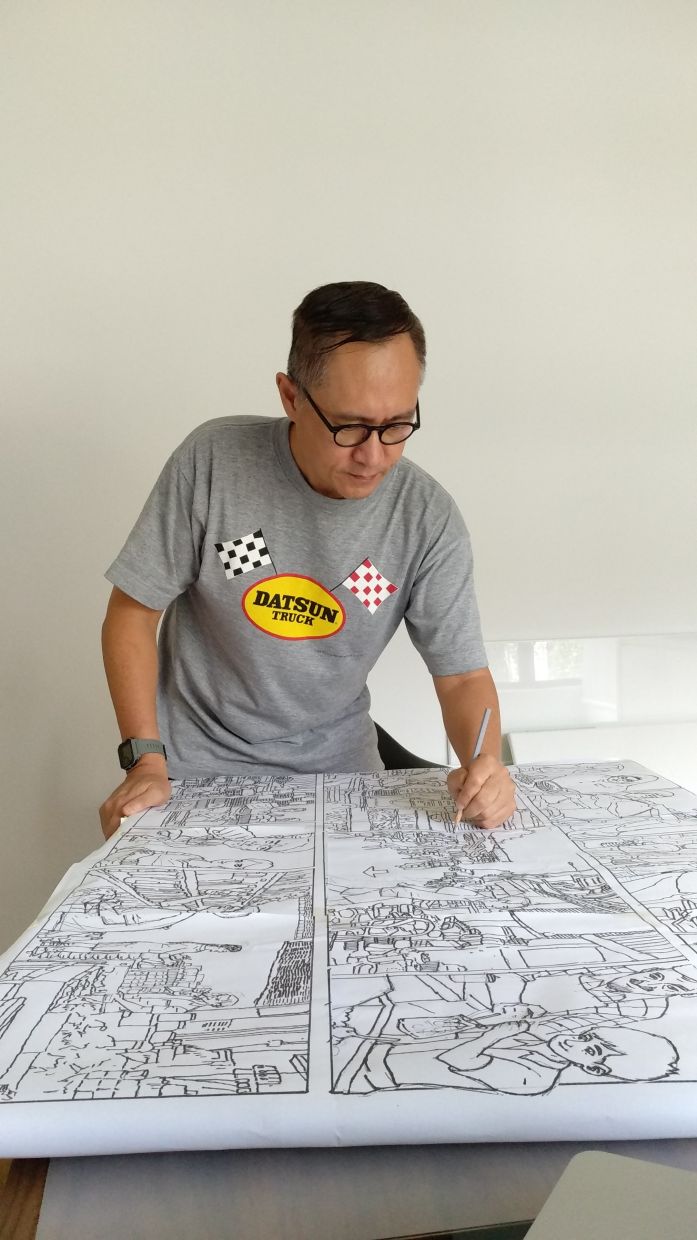 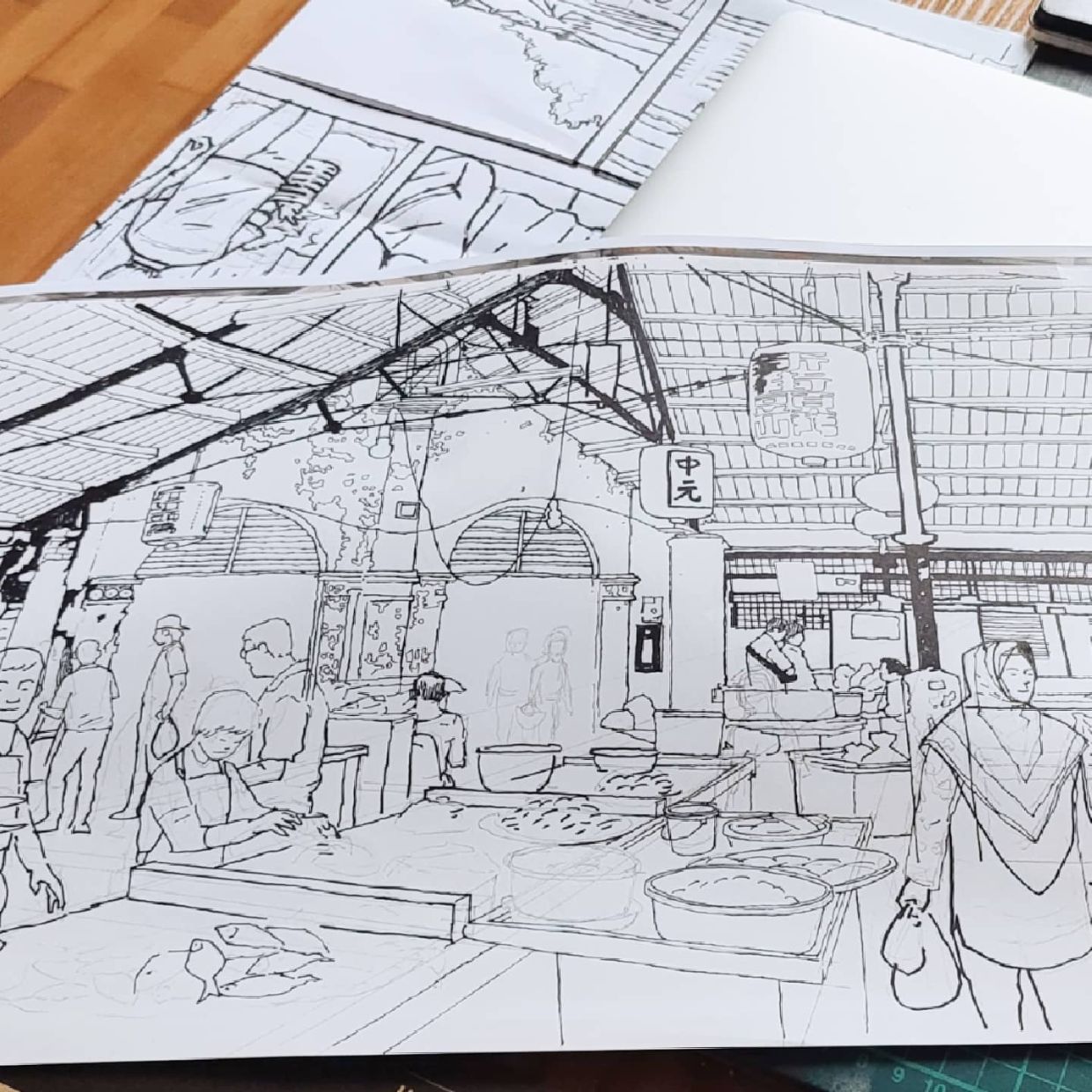 Lefty’s on-site exhibition 'Sama-Sama: A Multi-Cultural Art Journey', which was supposed to show at George Town Festival, has been postponed to a later date. Photo: Lefty Kam

Lefty (centre) visiting Thai Menora legend Pak Wandee (right) and his son Boon Leua in Pulau Tikus for the I Am Home project, an online exhibition, last year. It features multicultural narratives of home-making in Malaysia. — I Am Home Project

This is just the beginning of a journey. Lefty envisions to continue 'Sama-Sama' in different places in order to document and spread the true spirit of harmony in Malaysian society. Photo: Lefty Kam

Lefty hopes that his now postponed 'Sama-Sama' exhibition will get a chance to shown once the pandemic situation improves. Photo: Lefty Kam

Gilamon Studio's 'Major Zombie: Love And Loss' from 2011, which introduced the masses to Lefty's Major Zombie character (which he created in 2003). Photo: Filepic

Lefty's artwork of a wet market in George Town, which is part of his 'Sama-Sama' exhibition. Photo: Lefty Kam