Kide’s 'Sa-hari Di Pekan' (acrylic on canvas, 2021), gives us a glimpse of a busy day in a quaint Malaysian town (usually, for Kide, it's Kuala Pilah in Negri Sembilan). Photo: Segaris Art Centre

In these grey and grim pandemic days, contemporary artist Kide Baharudin’s colourful world of kampung life and reflections on the good ol’ days in Malaysia work like an ideal pick-me-up to brighten up the mood.

Kide’s nostalgia-tinged excursions into the country’s storied past are prominent in his new solo exhibition Sa-Hari-Hari at Segaris Art Center in Kuala Lumpur. It is the young artist’s first gallery-based show, which showcases his full artistic range like never before.

As usual, it is a hive of activity when it comes to Kide’s canvas world, with the townsfolk going about their day and vivid splashes of colours beckoning us into the happy days of small town life.

Sa-Hari-Hari dives into the retro everyday with gusto, much like how Kide paints. He even titles his works with old textbook Bahasa Malaysia spellings.

If it is superlatives that you are after, there are a few large pieces in this exhibition, like Sa-Hari Di Pekan and Sa-Hari Di Kampong, which both measure 2.44m x 3.66m. They are the biggest works Kide has produced to date.

“They are also very detailed. I had a million thoughts running through my mind while working on these paintings. There were no preliminary sketches, I simply worked directly from the stories and images in my head.

“It was very hard, but the spontaneity is so much fun. I paint with love, and with all my heart and soul, ” says Kide. There are 35 works featured in this exhibition, including two wooden sculptures. One of the sculptures, Lagak Si Kukur, is fashioned out of an old traditional coconut grater belonging to his family.

Overall, this body of work is inspired by the stories Kide has heard from his parents about what life was like decades ago.

Growing up in Kuala Pilah in Negri Sembilan, Kide, 31, is no stranger to small town living himself. But what really piques his interest and provides fuel for imagination is the stories his parents tell, of their lives and how it was in the past.

“Not stories from textbooks, but from the mouths of the local community, ” he assures.

Kide’s artworks are not a documentation of a specific place or time; rather, they are a patchwork of memories, stories, fantasy and creation. The scenes in his works could be any village or town in Malaysia, or perhaps they are all of them. “I paint a world that I have never experienced, like I am in a dream that is influenced by my reaction and response to the stories I hear. The paintings are reminiscent of everyday life in the 1960s and 1970s.

“How do people make a living, how do they have fun, what games do they play? They hang out with friends, they fight, they make up... they gather for food and drink. I like playing with elements of humour and chaos in each character I create. I hope people will be able to see and feel the movement in my works, while imagining an accompanying soundtrack of classic pop tunes or folk songs, ” he says. Kide cycling on the streets of Kuala Pilah, Negri Sembilan. The small town has been a source of inspiration for his art. Photo: Kide Baharudin

Those who were at Kide’s debut exhibition last year will no doubt enjoy revisiting the familiar themes captured in this show. Pe’el, held in conjunction with his collaboration with American streetwear brand Vans, was held at Tun Perak Co-Op in KL in July 2020.

But there are differences in Sa-Hari-Hari, of course, because this new chapter is bigger, bolder and really comfortable in its own skin.

Sa-Hari-Hari might have not have Pe’el’s jukebox “pop yeh yeh” playlist, curated by Kide, but this new series definitely has a lot more stories to tell on the huge “wide-screen” canvases.

“I would say that this new body of work is more ‘freestyle’ and raw. I packed it full of stories and explored new ways of using colours for different effects.

“For instance, I played with a gradient of sorts – moving from dark to bright colours in a single artwork. I reckon it captures how we have both daylight and night making up a day, ” Kide notes. The gallery is currently closed to the public but selected works from the show are being highlighted here.

But even a lockdown doesn’t seem to have dampened the reception to Kide’s new works.

Even before the exhibition opened on July 5, most of the works were snapped up by eager buyers.

“I feel touched that there are so many fans and collectors out there that are interested in my art and are supporting me. It motivates me to continue doing what I do.

“I hope that people will be able to feel how much of my heart I have poured into these works. I also hope it will evoke a sense of nostalgia in them and that it could serve as a conversation starter especially for the younger generation to talk about our culture and our roots, ” says Kide, who has his own studio in Seremban. In many ways, Sa-Hari-Hari marks an exciting new chapter in the artist’s career, which has been filled by group exhibitions, pop culture collaborations and local commissions.

Kide, who studied graphic design at UiTM Melaka and specialised in illustration, has steadily made his way in the contemporary art scene. This once “outsider” is now a major and exciting addition to the local art scene, given the fact that he can also inspire other outsiders to follow his lead and exhibit in galleries.

A few years ago, Kide wasn’t even working on huge canvases, but his art, good eye for local detail and storytelling skills were already setting the stage for his “arrival” in the gallery circuit.

“Many (in the art scene) will say that Kide didn’t have that conventional contemporary artist career start. He might have taken a circuitous journey, from graphic artist and illustrator before finally showing in a gallery. But take nothing away from his talent and artwork, which reminds me of works from the late Zulkifli Dahlan (a co-founder of Anak Alam art collective in the early 1970s) and cartoonist Datuk Lat, ” says Nizam Rahmat, chief executive officer of Segaris Art Center.

“A few years ago, we spoke a lot about how he would like to present his art. He knew he had to prove himself to the art collector scene. Kide waited patiently, did the group (art) shows, worked hard on his art style, and always had such positive energy. This new show also saw him facing challenges brought on by the pandemic, but he kept going.

“In fact, he might be delivering new works to add to the Sa-Hari-Hari show... we really hope the pandemic situation improves so that the public can view this show, ” he adds. Like everyone else, the pandemic and the multiple lockdowns in Malaysia has meant making changes to Kide’s work process.

“It has affected me a lot as someone who loves travelling and being outside to observe people and their culture, daily activities and life. But it is not going to stop me from dreaming and letting my imagination run free, ” says Kide.

The past year has seen him creating more art-related content which he shares here. Recently, he has been posting clips of him working on selected artworks from his ongoing solo exhibition, and 30-second drawing videos.

“I hope to keep going with these short videos. To me, art and creativity is more important than ever during such difficult times to keep negative thoughts at bay, and as an outlet for self-expression, ” he concludes. 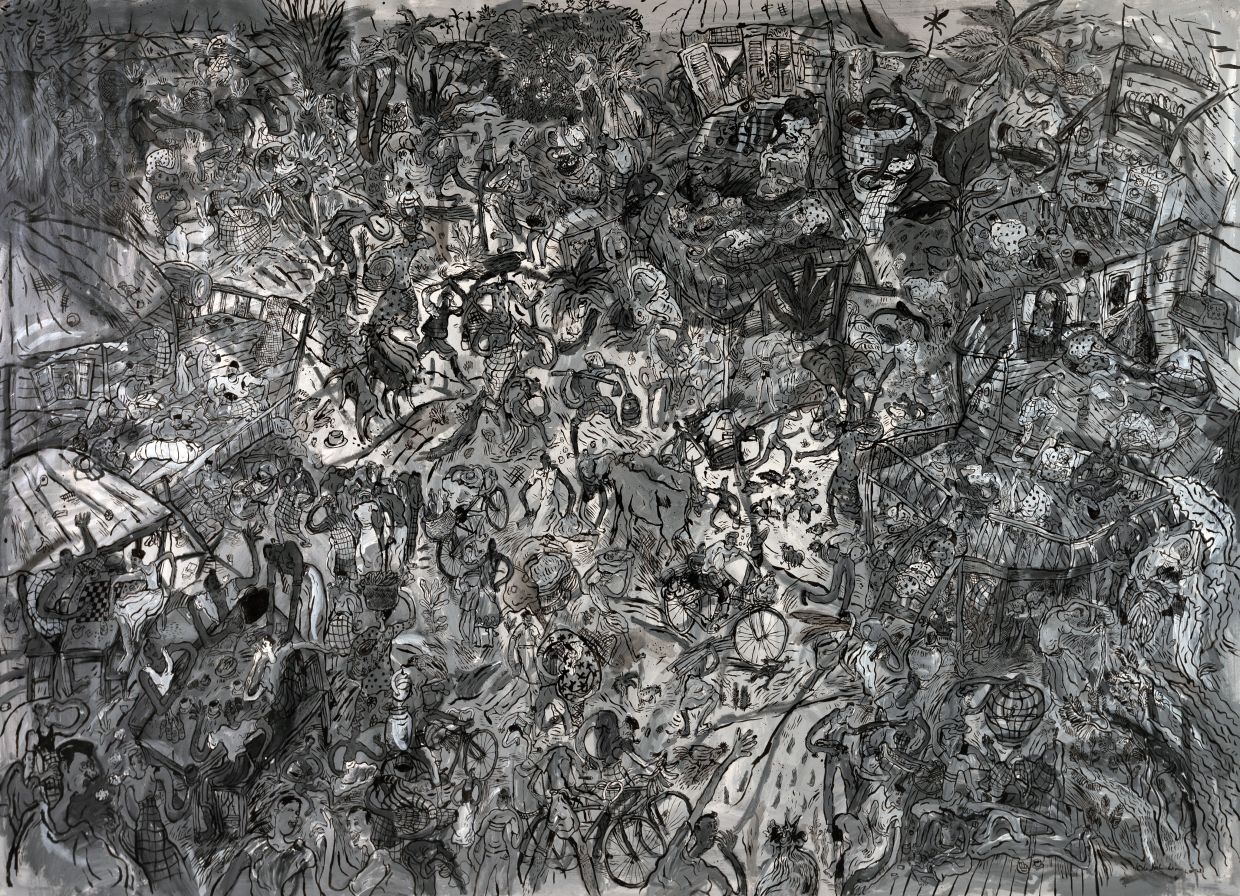 Kide’s 'Sa-hari Di Pekan' (acrylic on canvas, 2021), gives us a glimpse of a busy day in a quaint Malaysian town (usually, for Kide, it's Kuala Pilah in Negri Sembilan). Photo: Segaris Art Centre

Kide cycling on the streets of Kuala Pilah, Negri Sembilan. The small town has been a source of inspiration for his art. Photo: Kide Baharudin

Kide working on one of his bigger artworks in his studio in Seremban. Photo: Segaris Art Centre