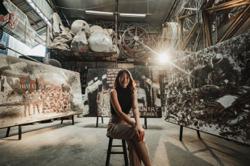 Doge, the beloved Shiba Inu image that has become one of the most iconic memes, is now featured in contemporary artist Red Hong Yi’s new artwork.

Doge To The Moon is her first non-fungible token (NFT) from her Meme Banknotes Series, which comprises six designs. An NFT is a digital asset (representing real-world objects like art, music, in-​game items and videos), which is steadily making its way into the Malaysian contemporary art scene.

This series, which involves spoofing and redesigning banknotes from different countries, is a reflection of how meme assets, cryptocurrencies and NFTs have disrupted industries, including traditional banking and art galleries.

“One concern about fiat money (banknotes printed by central banks) is the continual printing of paper money, which economists warn will lead to inflation. This has led to a large community of everyday people seeking alternative investments. This is what my artwork addresses, ” says the Sabah-born Red, in an Instagram post .

For this series, she took inspiration from how the first banknotes were made through metal carved plates.

“My banknotes are printed through an etched copper plate, allowing me to print as many banknotes as I want to but like an NFT, there will only ever be one master plate, ” she shares.

In Malaysia, art collectors might still be in the dark about ownership issues, but they will learn that NFTs exist on a blockchain and cannot be replicated. They can be used to represent physical assets like artwork, for instance. NFTs contain ownership details and provide proof of ownership and authenticity.

“NFTs may still be a novel concept to many, but I do believe in its potential to create a more transparent and efficient world. NFTs have been gaining prominence in the arts industry in recent times and have allowed artists to create digital certificates of ownership for their valuable work, ” says Red.

Doge To The Moon, based on the Chinese Yuan, is a nod to China being at the forefront of the cryptocurrency landscape, and being the first in history to issue paper money during the Song Dynasty.

It is up for auction on the Binance NFT Marketplace until July 11.

The buyer will own the physical banknotes as well as the accompanying copper plate that has been etched with the design.

The other Meme Banknotes in the series - based on the US Dollar, Euro, British Pound, Malaysian Ringgit and Japanese Yen - will be minted and made available on the Binance NFT Marketplace over the next five months.

There are plans for a Memebank Exhibition to be held later this year in Kuala Lumpur, to showcase all the physical Meme Banknotes in Red’s new series.

"As an artist, I have always been intrigued by how traditional and digital art can be integrated to create timeless masterpieces - uncovering the intricate elements of traditional craftsmanship with digital finishing techniques, ” concludes Red.

In April, Red created an image that was part sculpture, part performance art in Kuala Lumpur, which was featured on the cover of the April 26 'Climate Change' issue of Time magazine. She and her team constructed a 2.3m x 3m world map out of 50, 000 green-tipped matchsticks, and torched it. 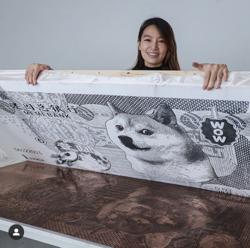