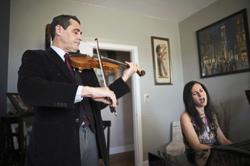 Foo Fighters frontman Dave Grohl has announced he has a memoir, The Storyteller, on the way, set to be released in October. – Youtube screenshot

Foo Fighters frontman Dave Grohl has announced he has a memoir, The Storyteller, on the way, set to be released in October.

Published by Dey Street Books – a HarperCollins imprint – and out October 5, the book is described as a celebration of music and a collection of life stories from the legendary rocker. From childhood mishaps and adolescent adventures to stories about his time in Nirvana and Foo Fighters, Grohl is promising to cover his life's craziest and most touching moments.

Giving fans a taste of what's in store from his literary venture, Grohl posted an 11-minute-plus introduction to the book Tuesday on YouTube.

"There is a common thread that runs throughout everything that I do: storytelling," Grohl said. "Whether in song, documentary film or on the page, I have always felt compelled to share moments from my life. This inclination is a huge part of what excites me creatively but also as a human being."

In May, Grohl penned a heartfelt essay for the Atlantic titled The Day the Live Concert Returns, which served as a love letter to live music. At the same time, Grohl ended his longstanding social media dormancy and created the Instagram account, @davestruestories. The page features bite-sized stories written by Grohl, ranging from the time David Bowie told him to "f*** off" to the time he jammed with Prince.

A direct way to share stories with fans, Grohl's Instagram page served as a precursor to his upcoming memoir.

"From the second I saw Dave's first post on Instagram, I knew I was going to publish his book," said Carrie Thornton, Dey Street's VP and editorial director. "It turns out that he can write with as much energy and passion as he performs."

While The Storyteller is Grohl's first published book, it is not the music icon's first venture in storytelling. In 2013, Grohl made his debut as a feature director and producer with the documentary Sound City, which focused on the history of the studio of the same name where Nirvana recorded the diamond-certified album Nevermind.

In February, Foo Fighters released Medicine at Midnight, their 10th studio album, which followed the band's 25th anniversary. In November of 2020, the Foos released a short documentary, Times Like Those, that looked back at the band's legacy. – Reuters