Facing torture, a servant girl turns her eyes to the heavens and sings of love.

Her soprano voice swirls high and fills the room as she declares her resolve of unrequited devotion to a prince in disguise.

After her heart-wrenching aria, there is a moment of stunned silence before the audience erupts in applause.

Such was a scene from Puccini’s Turandot staged at Penang’s Dewan Sri Pinang in 2003.

The opera, followed by Carmen that was staged the year after, was among the last large-scale performances by the Penang Arts Council (PAC) that brought numerous operas and operettas to Penang.

After going quiet for over 15 years (save a number of small, selected concerts), a push to revive the council has been initiated.

Now headed by Joe Sidek, the former mastermind of the George Town Festival, with the blessing of former president Pamela Ong, PAC is looking to forge a new direction for arts and culture.

It is no easy feat to trace the legacy of PAC. Some will recall the days of The Merry Widow and The Land of Smiles, however, beyond the personal recollections of the performances at Dewan Sri Pinang from the mid-1990s to the early 2000s, few records can be found.

It is believed that the council was brought together some time in 1954 by prominent local figure Datuk Cheah Inn Kheam – more widely known as I.K. Cheah.

A lawyer by profession, Cheah’s insatiable love for the arts extended to music, poetry, the stage and even ballroom dancing.

“He learnt the violin when he was young and continued when he went to study law in London.

“I can remember him practising the violin every morning in his sarong before he went to office and again in the evening, ” recalls Winnie, Cheah’s daughter. A scene from 'Turandot', which was organised by Penang Arts Council, at Dewan Sri Penang in December 2003. Hsing-An Chen (right) played Princess Turandot while Calaf was played by Dominic Natoli. Photo: Filepic

Eventually, Cheah formed a string quartet that gathered once or twice in his home every week and he was instrumental in the formation of the Penang Arts Council Orchestra in 1958.

“His quartet influenced us to start a girls’ string quartet in school and eventually, a piano trio, ” says Winnie, adding that she plays the violin while cello is her sister Beatrice’s instrument.

Cheah died in December 1984 and the following year, PAC organised a fundraising concert to set up a trust fund in his name.

To this day, the I.K. Cheah Memorial Prize of RM1,000 is handed out annually to the highest and youngest ABRSM Grade 8 distinction scorer in Penang.

With PAC’s origins dating back some 60 years ago, the Penang House of Music (PHoM) resource centre has been roped in to look into the rich history of the arts group.

“We only have about half a dozen PAC programmes and the ones we have are all from 1961 and 1962, ” says PHoM head Paul Augustin.

From concert programmes to newspaper articles, the material sourced from the PHoM includes photographs of performers, ticket prices and recital repertoires.

“The information we see from the documents tells quite a story. It seems that PAC was quite active in promoting the arts, or at least an appreciation of the arts, in a series of programmes.

“One programme featuring (Singaporean pianist) Lollabelle Wong states ‘The Sixth Celebrity Concert, 1962 Series’... that would mean that a series of concerts were lined up over the year. There must have been a certain amount of public interest for the arts, ” says Augustin.

The archives also point to the level of involvement of local musicians in the growth of the arts.

“We can see in the (British pianist) Irene Kohler performance, she was backed by local musicians and these musicians were mentioned by name so there was a sense of lifting the standard of the local musicians as they were backing international artists.

“It’s important to note also as well that these performances were sometimes made possible through the support of foreign embassies or (local) arts and culture councils or societies. Meaning aside from Kuala Lumpur and Singapore, Penang was a place where arts were being performed, ” he adds.

Admission into the performances generally ranged between $1 and $5, with students being charged 50 cents.

“The concerts were mostly in school halls – Methodist Girls’ School, St Xavier’s Institution, St George’s Girls School. The price of the programme itself was 20 cents, which would be quite a sum for a student in those days. But it was a different time and era and a good one for the arts in Penang and its people, ” says Augustin.

Fast forward to the turn of the century and PAC is thriving in opera.

Under the leadership of lawyer Pamela Ong, annual opera productions were staged at Dewan Sri Pinang followed by, in some years, runs at Istana Budaya (in KL). 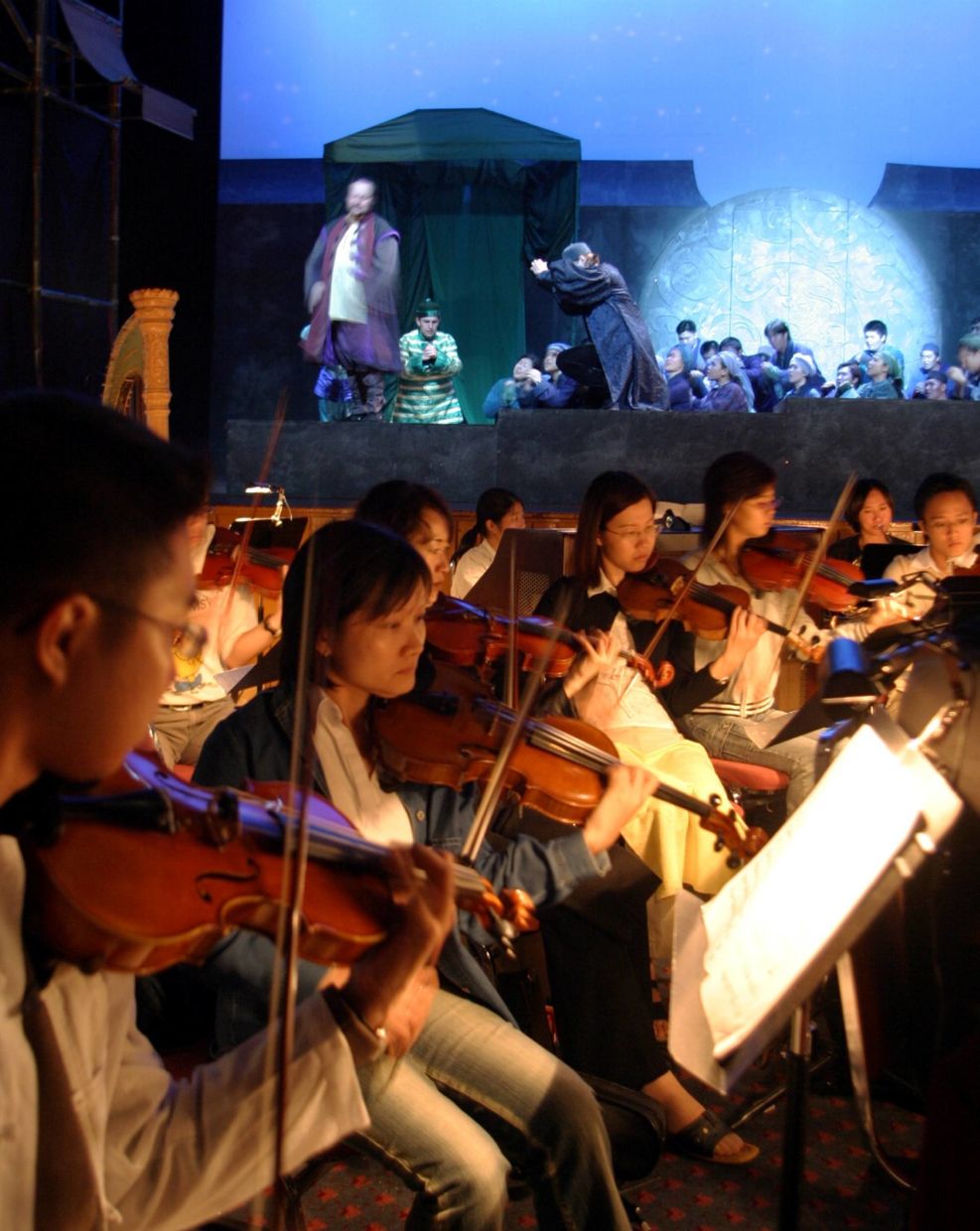 The cast of 'Turandot' at a rehearsal with the National Symphony Orchestra in 2003. Photo: Filepic

“We did organise other concerts but they were always sideshows.

Our main focus every year was the opera and it took the whole year to produce one, ” says Ong.

As the head of the legal firm Lim Kean Siew & Co, Ong mobilised her office in musical productions every year.

“We had over 30 people in the office including 10 lawyers and everyone was involved: the staff, secretaries, accountants... my legal office was like an opera house!” she says.

“At that time, PAC in Penang was the only company in the country producing full opera productions. It takes so much work and so many people but in the end, the satisfaction is in the production of something worthwhile, ” says Ong.

At the end of 2020, after a long, difficult year, local art stakeholders began mulling over ideas to inject new energy into the arts scene.

Joe, well established for his involvement in curatorship and directing arts festivals, was encouraged to take the reins.

“I was involved in both Turandot and Carmen and had the pleasure of working under Pamela Ong who really inspired me and encouraged me to join the Federation of Asian Cultural Promotion, ” says Joe, who now sits as the federation’s chairman. Joe Sidek, now in charge of the Penang Arts Council, is tasked to give the institution a contemporary edge without forgetting its pioneering history. Photo: Filepic

After discussions with Ong on reviving PAC, the committee convened at the end of last year to welcome a new president.

“PAC is a great platform to pull everyone together and during our AGM in mid-November, Pamela passed the baton to me.

“We have been invited by the state government to discuss the state of the arts and how we can all help. We intend on working together with (Khazanah Nasional’s social purpose and city-building subsidiary) Think City and PETACH (Penang State Exco for Tourism Development, Arts, Culture and Heritage) in a series of roundtable discussions to help us identify and formulate an action plan to work parallel with the state (government), ” says Joe.

He wants PAC to be more inclusive, with a membership drive started to include other genres of the performing arts and performing groups from the non-English speaking community.

While opera will always have a fond place in PAC’s legacy, Joe is looking to bring together more groups from different art forms.

“Aside from that, O:PEN Penang is an initiative that has already been started and will now be overseen by PAC, ” he says.

Joe adds that the event has been postponed due to the Covid-19 pandemic but everyone hopes it can be rescheduled within the first quarter of the year if the situation permits.

PAC also intends to connect with various unique artistic and environmental initiatives like Penang Hidden Gems, Penang Walkabouts and Seberang Perai Channel that all successfully utilise social media to connect with the public.

“The spirit of people taking ownership of our space and our stories is so inspiring, ” concludes Joe.

KL Photoawards 2021: a time to define our individual identity and sense of self