British artist Banksy has shared a video of himself in the process of painting stencil graffiti of a prisoner escaping which appeared on Monday on the side of a former prison wall in the city of Reading.

Filmed by an accomplice, the video shows Banksy in a black hoodie working quickly under the cover of darkness, although he never shows his face.

Banksy has earned worldwide acclaim for his witty, subversive street art and his works can fetch millions of dollars. But he keeps his identity hidden.

By the light of a head torch, the artist spraypaints layers of white and black through pre-cut paper stencils onto a red brick wall, before he adds the finishing touches with a paint roller and marker pens.

Later the image is revealed as that of a prisoner escaping down a rope made of knotted paper sheets from a typewriter dangling at its end.

The video, which was posted to Banksy's Instagram account on Thursday with the caption "Create Escape", is set to gentle commentary taken from an old episode of The Joy Of Painting with American artist Bob Ross.

As drone footage reveals the full image of the prisoner on the brick wall, Ross is heard to say: "Painting, to me, represents freedom."

Finally, the video shows two police officers wandering up to the wall and staring up at the painting. - Reuters 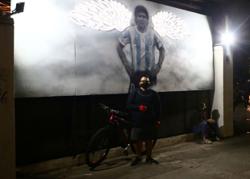 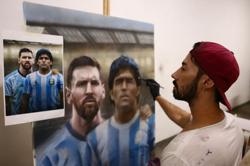