Hamidi’s 'Forest Bathing' (Chinese ink and acrylic on canvas, 2020), which is one of the works featured in the Visual Poetry Project. Photo: Wei-Ling Gallery

A new initiative by Wei-Ling Galleries, a collaborative programme entitled “The Visual Poetry Project”, aims to bring the visual art scene and literature community together, by highlighting the links between these two mediums of creative expression.

In this series, the gallery hopes that poets and writers will be inspired to respond to artworks through written word.

The first collaboration featured best-selling author Charissa Ong Ty, who responded to one of Perak-based Hamidi’s artworks, The Magic Flower, through poetry.

Gallery director Lim Wei-Ling says the idea for this project came about after she and her gallery team were trying to get to know Hamidi’s abstract works better.

They did an exercise where they used three words to describe their emotions when dealing with each painting.

“We were struck by how differing each response was, which underscored how evocative these works were. Abstraction allows for deeper and wider interpretation. Unlike figurative work, abstract art is not meant to be recognisable, and is therefore subjective to its audience, ” says Lim.

“So, depending on who you are, and at which stage you are in life, you may feel or respond quite differently towards certain works of art, depending on your frame of mind at the time. That’s when the team and I thought about expanding this idea to include writers and poets from the Malaysian literary community... inviting them to respond to the artworks, using the spoken word as another medium of artistic expression.” ‘Each poem is like a ‘river’ in the sense that it came from one source, but, like water, it would continue to flow – sharing a certain experience, and inspiring others. I think that’s wonderful,’ says Hamidi.

Zack lends reflective thoughts to the moody artwork Solitude, Leng takes on the greenscapes of Forest Bathing, while Chua’s poetry spreads across the pair of works Fuze and Fuze II.

Hamidi reveals the paintings in this series were created last year, while he was was confined in his studio. Despite restrictions imposed by the Covid-19 pandemic, Hamidi found a sense of peace by spending more time walking the jungles and hills surrounding his studio in Seri Iskandar, a small town some 40km from Ipoh.

Hamidi, 49, would find a “private space” in a spot by the river, under a banyan tree, where he would relax and meditate. He would grind laterite rock and soil into powder, and mix it with Arabic glue to develop his own pigment. 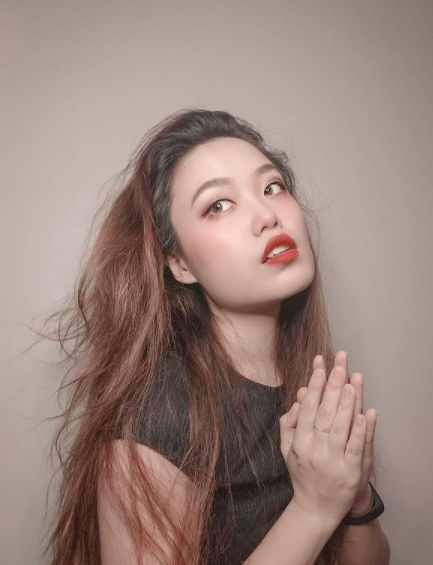 The results can be seen in Saring II: Sublimity, a series of paintings paying tribute to the power of nature.

“I think in a certain way and I’m deeply interested in the theme: ‘Nature and Man’. This theme is continuously reflected in my work, including my recent series Saring and Saring II: Sublimity. These exhibitions are a bridge for me to connect and become more conscious of important aspects in my life; nature, love, my appreciation towards creation, and self-reflection, ” says Hamidi.

The artist also adds he had read the poems written about his new artworks, and thought they were fantastic.

“I think it’s a wonderful initiative, which I very much appreciate and am excited about. I think that The Visual Poetry Project invites us to be more aware of both ourselves and Mother Nature. Each poem is like a ‘river’ in the sense that it came from one source, but, like water, it would continue to flow – sharing a certain experience, and inspiring others. I think that’s wonderful, ” says Hamidi.

In her poem, Ong says she saw Hamidi’s Magic Flower as the artist’s take on humankind’s obsession with finding immortality.

“It’s a metaphor for gaining immortality if you fall in love with an artist... as they usually immortalise their muses through art. My poem is slightly abstract just like Hamidi’s abstract painting... I would like to see who got the message, ” says Ong, 28.

She is delighted to be part of this project as she found Hamidi’s paintings beautiful and mysterious. To her, the worlds of poetry and art are similar in that they both leave lasting impressions.

“Without poetry and art, the world would not evolve. I myself move between mediums of art quite often from the laptop touchpad, charcoal, pen and music. Art takes many forms, but they all achieve one thing... make life worth living, ” she concludes.

The selected poems inspired by the Saring II: Sublimity show will be included in the exhibition catalogue. The Visual Poetry Project is starting with Hamidi’s show, but it will likely expand to cover other shows which might be applicable at Wei-Ling Galleries.