It was 6.39 in the morning (Oct 29) when I got a message from Anna, Salleh Ben Joned’s eldest daughter, now residing in Australia. Salleh had passed away. It took me quite a while to absorb the news.

The last time I met Salleh was in March last year. Anna was back in Malaysia, among other things, to do a special programme for the Australia Broadcasting Corporation (ABC) on Salleh.

She brought me to his house in Subang Jaya. I had not seen Salleh for some years. He was sitting on a chair at the entrance and I was surprised he looked so well. But I was informed of his dementia.

I wasn’t sure he recognised me when Anna reminded him who I was. There was very little conversation between us.

Anna took out her laptop and told her father to read a poem, which he did, his own. The voice was unmistakably his, the voice that I was familiar with from over the years.

Even his style of reading had not changed. At the end he asked, whose poem was that?

My heart missed a beat. It is so sad to see him in that condition.

On Thursday, Salleh, “the bad boy, the recalcitrant, the contrarian of Malaysian literature”, left us.

I texted the news to a few people who knew him well, including Datuk Kadir Jasin and Kee Thuan Chye, the former literary editor of New Straits Times. It took a lot of audacity to provide space for an unpredictable writer like Salleh to write for a mainstream paper.

Thuan Chye pushed the envelope back then for Salleh’s column As I Please, which wasn’t without its detractors.

Salleh was everywhere back then, gatecrashing literary events and reading his notoriously politically-incorrect poems. He was an icon for rebellious and angry poets and dramatists of my generation. While Salleh was cautiously tolerated by the literary establishment, he had a massive following among young artists and writers.

Salleh’s ethics, so to speak wasn’t “very Malay”. In fact, he was labelled as the most unlikely Malay. But that didn’t bother him.

His views about a typical Malay writer as a “type” (which means there are exceptions) is one that is (in his own words) “utterly predictable, cliché-clocked, slogan-sloshed, pretentious, sentimental, deadly solemn and therefore humourless animal.”

He had unflattering views about the government’s Bumiputera policies while his views on the religious establishment unsettled many.

In Malaysia, Salleh was propagating a new culture, which was certainly not Malay nor an Australian one but “Salleh Culture.”

Then, there was the pissing (literally) incident of 1974. It happened at the opening of an art exhibition at Sudut Penulis (Writer’s Corner) of Dewan Bahasa Dan Pustaka (DBP) no less. It was his way of protesting the pretentiousness of a manifesto proclaimed by an artist. Some said it was a day of infamy for Malaysian arts. Others hailed the incident as a defining moment in the artistic landscape.

I was there when it happened. I was a first year student at Universiti Malaya. I was overwhelmed by “the gesture”. It was mischievous of him to do that, perhaps even beyond the pale of decency. But it was “inspiring” to say the least for many young writers and artists.

Salleh was a man of contradictions. He was enigmatic as he was easily misconstrued. But he was witty and clever. Sadly, he was vulnerable to depression. He would disappear for some time only to emerge later bubbling with energy and ideas.

No one knows her father (whom she called “Abah”) better than Anna. She has meticulously assembled bits and pieces of her father’s life from his birthplace in Melaka, his studies in Australia, and revisited his works in the two-part ABC podcast Salleh Ben Joned: A Most Unlikely Malay.

It paints a sincere, truthful and heart-wrenching portrait of the man. It must have been a tough and harrowing assignment even for Anna. By telling the story of her “infuriating yet loveable father”, the podcasts will now help us understand the fearless and charismatic Salleh.

Salleh will be remembered forever as one of the finest minds ever to grace the Malaysian literary scene. 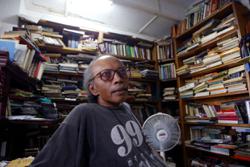