Children's book about Doctor Li, the first hero of this pandemic, set for October release

When Francesca Cavallo released her short story Doctor Li And The Crown-Wearing Virus as a free digital download during the coronavirus outbreak, the response was overwhelming. In just a short time, it was downloaded by 40,000 people and translated into 32 languages by volunteers from all over the world.

It was this overwhelming response that spurred her to develop this story into a hardcover, 44-page picture book, with colourful drawings by illustrator Claudia Flandoli.

“The incredible response that the short story had showed me that there is a lot of hunger for content that can help children explore their feelings about the pandemic. I also received questions from kids and understood that there were parts of the story which could be further developed. So I started thinking about a longer story with full-page illustrations. All the illustrations, including the cover, will be completely original. Much more detailed, much more beautiful. The story will triple in length, giving more space to Dr Li’s life and to the surprising ways in which humans around the world are showing up for one another during this crisis, ” says Cavallo, who is the co-creator of the popular Good Night Stories For Rebel Girls series, in an email interview.

After record-breaking campaigns for Rebel Girls on Kickstarter, she returns to the same crowdfunding platform for her new book and is hoping to raise US$50,000 (RM215,830) to bring the book to life.

The Kickstarter campaign ends on June 27. Backers will receive the book in October. It will be published by Undercats, Inc, in three languages: English, Italian and Chinese. Cavallo hopes her new book will connect people and inspire children to be brave in the face of adversities. Photo: Camilla Mandarino

“I usually do my best to pour my heart into all the books I write. I don’t think it will be easy to see many community-powered projects such as this one. I think the way books come to life is important. The fact that this book was able to cut through the noise and gather so many people around Dr Li’s story across so many different countries is something I am extremely proud of, ” she says.

Doctor Li And The Crown-Wearing Virus tells the story of Dr Li Wenliang, who was accused of spreading false information that “severely disturbed social order” when he raised the alarm on a new virus late last year. The ophthalmologist was working in Wuhan when he contracted the virus and died in early February. His death sparked anger and grief all over China.

Today, he is regarded as a hero for speaking up on the coronavirus despite initial efforts to silence him.

“I consider Dr Li the first hero of this pandemic. Through difficult times, humans always look for heroes, because heroes remind us that we can be braver than we think and that has a huge impact on our perceived strength. This is particularly true for children. It is true that Dr Li died, but he did the right thing. That has tremendous power in moments when we feel weak, when we feel we may be overpowered by something or someone, ” says Cavallo.

When she sat down to write the short story in the early days of the pandemic, it was a way for her to feel close to her readers during such a difficult time.

“I also wanted to ‘protect’ children from narratives around the origins of coronavirus that are rooted in xenophobia, ignorance and fear. I wanted kids to have an origin story of this crisis based on facts, a narration that could treat them with respect and help them to make sense of this abrupt change in their lives, ” she says.

Born in Italy and currently based in the United States, Cavallo notes that many children in the Western world are being exposed to a significant amount of racism towards Asians.

“For me, featuring a Chinese hero in a book created for an international audience was also a way to protect children from ‘interiorising’ that racism, which can be much more harmful than coronavirus if left unchecked, ” she adds.

This illustrated book is written with seven- to 10-year-old readers in mind.

“But as usual, it will be great for younger readers if they read it with a grown-up, ” she says.

Cavallo would know – she has always written books for children, with her most recent, Elfi al Quinto Piano, published at the end of last year.

“I love creating stories that can help children feel that the world is a big, big playground. That it was made to be explored, and that there is room for everyone. That sometimes it is a scary place, but that we can be brave and constantly fight to make room for one another. I hope the book will inspire children to be brave in the face of adversities and that it will keep Dr Li’s memory alive. And I also hope it will give everyone a way to feel connected at a time when some are trying to sew divisions and hate, ” she concludes. 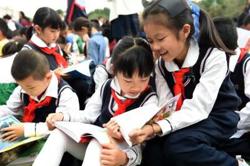 Best books of 2020? The New York Public Library has got it covered
Artful healing: Newcomer artist's first solo exhibit is a tribute to her late father
Scientists have evidence that some cave art was inspired by hallucinogenic plants
Ritual of listening: Sleevenote is a premium audio player for fans of album artwork
Melaka-based cultural activist gives Kristang language folk songs a global audience
The visual art world mourns the death of football great Maradona
London's National Gallery is charging a fee for a virtual tour of its 'Artemisia' exhibition
A list of picks to check out at this year's virtual George Town Literary Festival
Playful book about The Beatles wins major non-fiction prize in Britain
Online show 'Nadirah' attracts 1,500 viewers from 26 countries, returns for encore