It was a joyous two nights in November 2016 that saw KLPac's Pentas 1 venue come alive with people dancing and popping in the aisles, and singing their hearts out. Talk about a proper party scene from the pre-pandemic days.

The musical show, you ask? It was KLPac's sold out production One Thousand Million Smiles, a musical tribute to Sudirman, directed by Datuk Faridah Merican, The Actors Studio Malaysia co-founder.

You can catch the online premiere of this Sudirman tribute on KLPac's Youtube channel from May 30, 8.30pm to June 7, midnight.

One Thousand Million Smiles is the second theatre production from KLPac's archives made available online during these pandemic times. KLPac, which remains shut for the duration of the movement control order (MCO), started streaming shows on May 16 with the George Orwell-inspired Kandang.

“Sudirman had the charm. His songs are classics and they are so memorable that when you hear them, you can’t help sing them over and over again, ” said Faridah in an interview with The Star in 2016.

“The man had so much to share with us. He was known as a singer for all Malaysians," she added.

One Thousand Million Smiles features 16 Sudirman songs (from Balik Kampung to Milik Siapakah Gadis Ini and Salam Terakhir to Hujan), performed by a homegrown cast, including Dasha Logan, Tria Aziz, and Atai, Sudirman’s own nephew, who often appeared with him on stage. 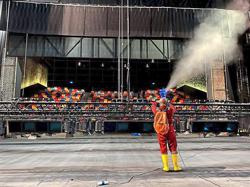