William Shakespeare is undoubtedly one of the greatest playwrights that had ever lived. He turned 456 on April 23 (the general estimate of his birth date given by historians).

In this extended "stay home" season, it is time to roll out the Bard's birthday celebrations. It has never been easier to watch world class productions of Shakespearean plays from the comfort of your room.

Whether you’re a Shakespeare buff and just curious about new things during this movement control order (MCO) period, there is definitely enough Bard out there to enjoy.

You can finally sink your teeth into some of the Bard’s most renowned plays by Shakespeare’s Globe in London on Youtube. And it is totally free! Arguably an authority on Shakespeare’s works, the theatre will release 40 productions on its Youtube page, including six mainstage productions which will be released fortnightly and each play will only be available for two weeks.

For the Bard's birthday, The Globe is going full tilt with the mother of all romance stories Romeo and Juliet. This production was due to kick off The Globe's summer 2020 season this week. Next best thing is to be virtually transported to a 2009 Globe Theatre show to watch Dominic Dromgoole’s beautiful Elizabethan production. Now streaming for free on The Globe's YouTube channel, you can watch Ellie Kendrick, a truly youthful Juliet, and Adetomiwa Edun, a boyish Romeo, fall in love, in spite of their long-standing family feud.

The Globe's Love In Isolation series is also ready for viewing, with performances of Shakespeare’s words (quotes, sonnets, soliloquies, even stage directions!) from the extended Globe family in their places of solitude and isolation.

This week, you can see performances from Stephen Fry, Athena Stevens and Shubham Saraf.

The Globe also partnered with British newspaper The Guardian on relaunching its Shakespeare Solos and asked readers to send in their performances of speeches from As You Like It, Hamlet, and The Tempest, to join leading actors in a digital celebration of Shakespeare’s works. Over 500 people from all over the world took part in this video here.

On top of that, The Globe will also release all 34 of 2012’s Globe To Globe performances on its Globe Player platform. Globe To Globe is a theatre festival that gives directors and performance makers around the world to interpret the Bard’s work in their own language and culture.

Another prestigious institution the Royal Shakespeare Company (RSC) is also making its digital content available for free on Marquee TV, a British-based online streaming platform for opera, dance and theatre. Think of it like the Netflix of performing arts.

Catch Doctor Who ... err, David Tennant in well-known English director Gregory Doran’s staging of Richard II, Paapa Essiedu in Hamlet and don't miss some of the Bard's cult plays like Cymbeline and Two Gentlemen Of Verona.

Entitled Every Night Is Opening Night, this initiative offers an enhanced programme of film productions, including weekly premieres. At press time, 14 titles are available on the platform. 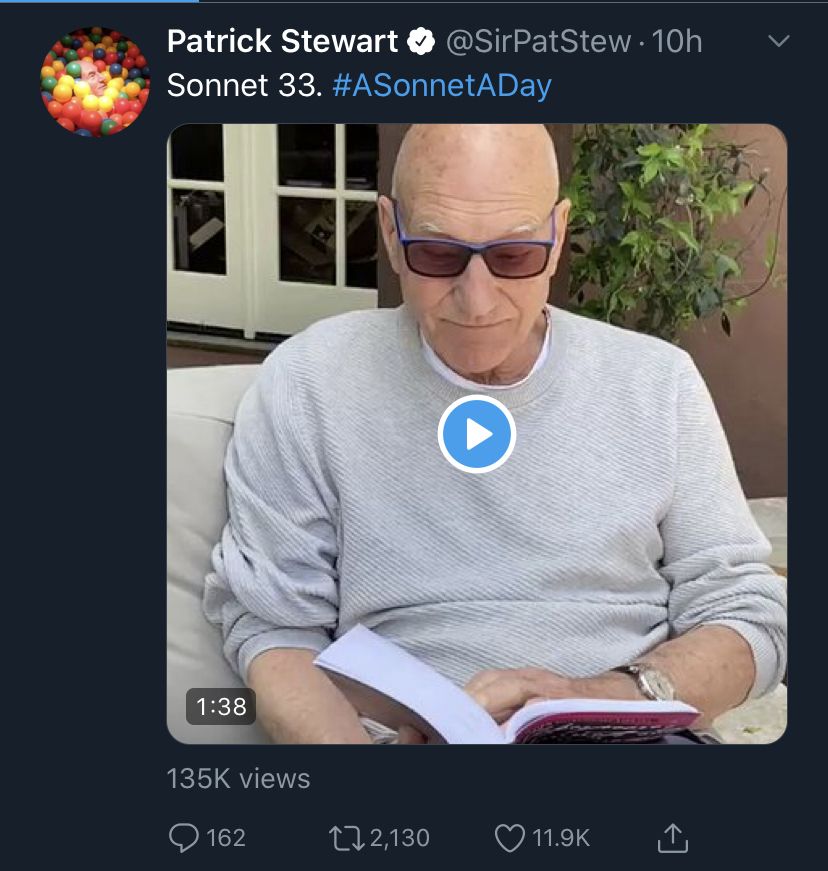 But if watching full length Shakespeare plays is not your cup of tea, you can head over to British stage and television actress Jade Anouka’s Twitter account.

Last month, Anouka curated a stellar line-up of English actors who all perform part of a speech by Portia in The Merchant of Venice. The participating actors are Anouka, Dame Judi Dench (Dench played Portia in the 1971 production by the RSC), Paterson Joseph, Meera Syal, Harriet Walter, Kobna Holdbrook-Smith, Paapa Essiedu and Simone Kirby.

Picard ...we mean, Patrick Stewart also took to his Twitter account to perform some of Shakespeare’s sonnets. Calling it #ASonnetADay, Stewart aims to read one sonnet a day, following the idiom "An apple a day keeps the doctor away". So far, Stewart has posted 29 sonnet readings on Twitter.