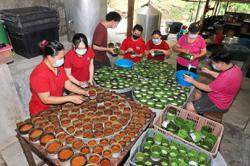 IF you know the mythological story of the Kitchen God, you will be familiar with nian gao.

This sticky cake made of glutinous rice is offered to the Kitchen God so he can’t bad-mouth the family that he is supposed to report on to the Jade Emperor of Heaven before Chinese New Year.

It is also a new year specialty because of its auspicious-sounding name.

Nian gao literally means sticky cake, but it is transliterated as “year high”, so every Chinese family will buy this cake hoping for higher prosperity or an increment.

The cake is bought before Chinese New Year and is only eaten later in the year so that it can harden and be batter-fried between slices of yam and sweet potato.

My family usually buys two or more nian gao every year, one to steam when it is still fresh and soft, while the rest is kept for frying later.

We prefer to get the ones wrapped in banana leaves, but if those are unavailable, the ones in plastic will do fine.

Beware that nian gao is extremely sticky when it is fresh, so it is recommended that you give a good brushing of a neutral-tasting oil all over the cutting board, knife, and plate that you intend to steam the nian gao in.

I recommend either palm oil or sunflower oil, but you may also use peanut oil if you don’t mind the flavour.

I would avoid corn oil and any blended oil because these can impart some flavours that can ruin your dish.

Cutting the nian gao into bite-size pieces will shorten the steaming duration and also make it easier to pick up when rolled in the coconut.

I also steam the fresh coconut first so that it will keep longer, and seasoning with salt also helps.

If desired, you may also steam the coconut with pandan leaves, but that is optional.

I find two pairs of chopsticks help me manoeuvre the sticky morsels around better.

This dish is best when soft and gooey so serve immediately while still warm.

It may remain soft at room temperature for about two hours, but the coconut will not keep fresh without refrigeration so it needs to be consumed within the same day.

Place grated coconut in bowl and steam for five minutes.

While the coconut is still hot, season with salt, and set aside to cool.

Brush oil all over the knife, cutting board and the plate that will be used for steaming the nian gao.

Remove the banana leaf wrapping from nian gao. Cut into 1cm slices, then into bite-size pieces.

Place the cut-up nian gao in one layer on an oiled plate and steam over medium heat for 10-15 minutes, depending on the hardness of the nian gao.

It is ready when soft and gooey.

While still hot, pick up pieces of nian gao with an oiled chopstick and roll in grated coconut.

Serve immediately, or within a day if kept in the refrigerator. Ingredients for steamed nian gao.Unlike the fried version, this one uses fresh nian gao that is still soft and sticky.

Cut up the nian gao into bite-size pieces so that it softens faster when steaming, and is easier to pick up with chopsticks to roll in grated coconut later.

To keep the grated coconut fresh longer, steam if for 5 minutes, then season with salt while it is still hot. 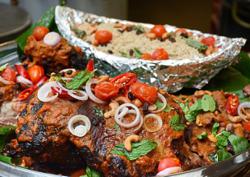