A few months ago, I visited a wet market and chanced upon a vendor who had brought all sorts of leaves and shoots from her kampung.

“What are these?” I asked her, prodding and prying but unable to ascertain one leaf from another.

“Ulam – haven’t you tried any of them?” she asked. And the simple truth was, I had sampled perhaps a few of these greens, but certainly nothing resembling the veritable smorgasbord she had laid out on her table.

Unfortunately, this unfamiliarity with indigenous greens isn’t particularly uncommon, especially among urban Malaysians with little connection to nature. But it is certainly something that Frenchman Dr Eric Olmedo, a principal research fellow at Universiti Kebangsaan Malaysia, is hoping to change.

Olmedo is the man behind the about-to-be launched Ulam School, a transnational project funded by the The Toyota Foundation that aims to shed light on indigenous edible flora in Malaysia, Vietnam and Cambodia.

He was compelled to launch the school after making some alarming discoveries – namely that Malaysians were some of the most obese people in South-East Asia, consuming vast quantities of fast food and other unhealthy fare; and that ulam, long regarded as healthy greens, had somehow in the shift towards modernity, been relegated to “kampung food”. 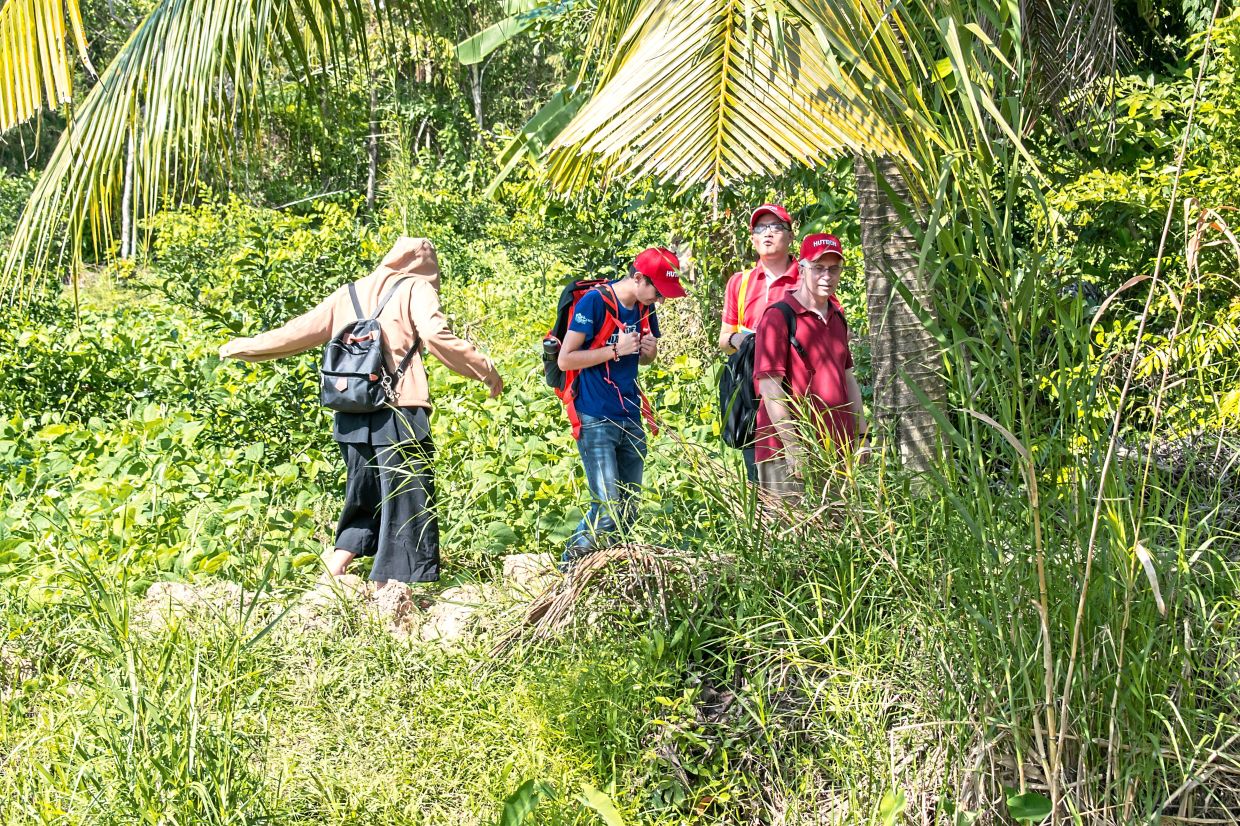 Olmedo (extreme right) embarked on field research in Vietnam, Cambodia and Malaysia to study the various types of ulam in the region, in preparation for the launch of the Ulam School. — ERIC OLMEDO

“When I read the reports that indicated that Malaysians were some of the most obese people in the region, I started to wonder how this happened and what can we do about it? And I quickly realised that the urban population in Malaysia is now 76%, so this is a development of urbanisation and industrialisation.

“And then I noticed that the food you eat also correlates with social status, so meaning if you live in a kampung, then you normally eat a bit more local greens. But when you are in the heart of the city, if the two spouses work, then you tend to eat outside, and that’s when the problem starts. Because in urban areas, the everyday food is not very healthy and healthy greens like ulam cannot be easily found everywhere – you need to really look for it, ” he adds.

A conversation with a colleague also cemented in his mind the fact that ulam - which Olmedo himself consumes because his Malay mother-in-law is a fan - has been progressively losing out in the popularity stakes.

“I was talking about this ulam school project to my colleague, a professor and he said, ‘In my kampung in Negri Sembilan, when we refer to people who still eat ulam, we call them kambing (goat).’ So for my colleague, eating ulam is like eating grass – it should be reserved for animals. And my colleague is Malay and he still has relatives in the kampung. 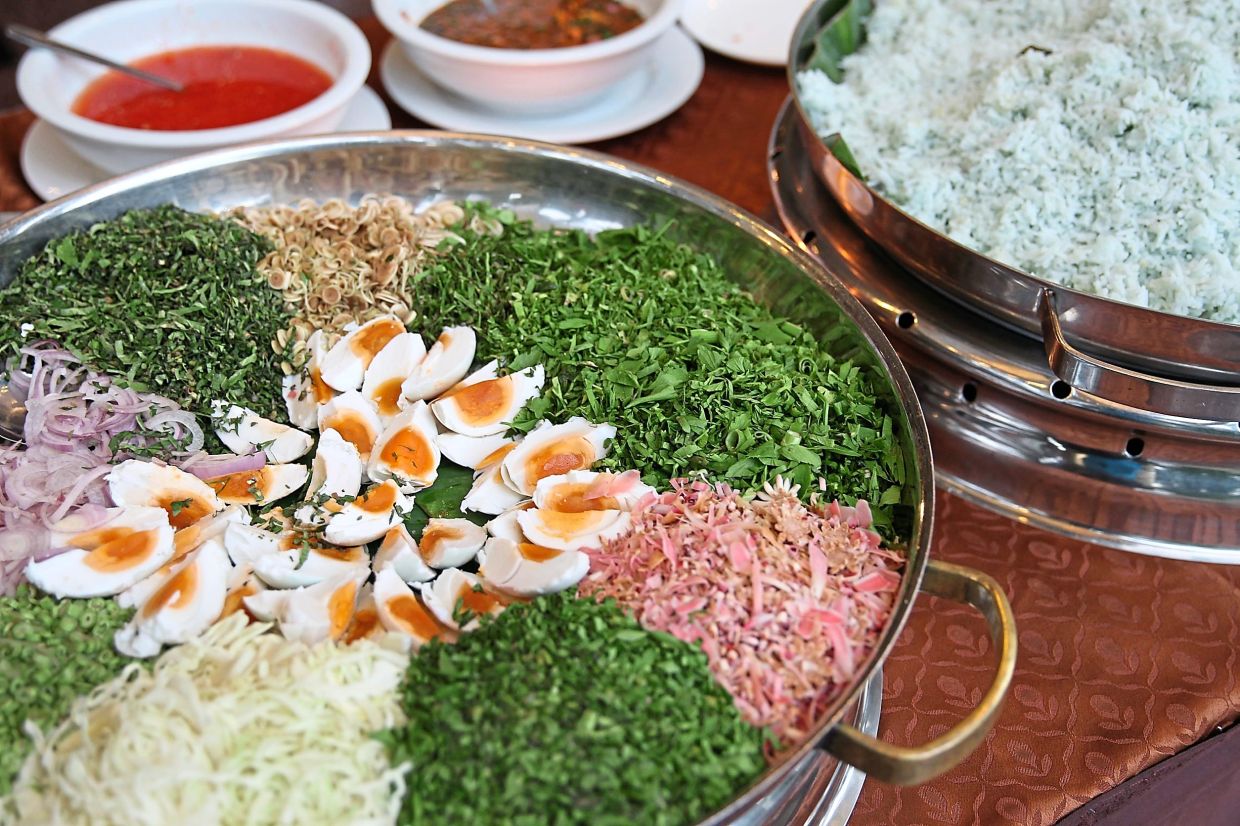 In some northern states, up to 40 kinds of ulam are used to make up nasi kerabu. — Filepic

“So what I’m saying is even within the Malay population – there is a disconnect between them and natural local resources i.e. edible flora, ” he laments.

Olmedo also says there is a gap in knowledge and interest between ulam and the non-Malay community, who don’t traditionally use these local leaves and shoots in their culinary systems.

“Ulam knowledge is quite ethnic-driven knowledge because it is more a part of the culinary systems of Orang Asli and Malays so if you are Chinese or Indian, you would have never heard of many ulam, so it needs to be made more accessible across ethnic boundaries, ” he says.

Buoyed by these realisations, Olmedo pressed ahead with his plans for an ulam school, determined to re-integrate ulam into mainstream consciousness.

So just what is ulam anyway? Although there is no official definition, ulam is generally acknowledged to be the edible parts of local plants or trees (leaves, shoots, flowers, fruits) that can be eaten raw or consumed after being blanched. According to Olmedo, in the Malay archipelago, the usage of ulam – both medicinal and culinary – is also linked to the local indigenous Orang Asli and Malay populations, as it originated as part of a rural diet.

There are reputedly at least 120 different kinds of local ulam in Malaysia that have been identified by botanists, but Olmedo says this is nothing compared to what was available before. 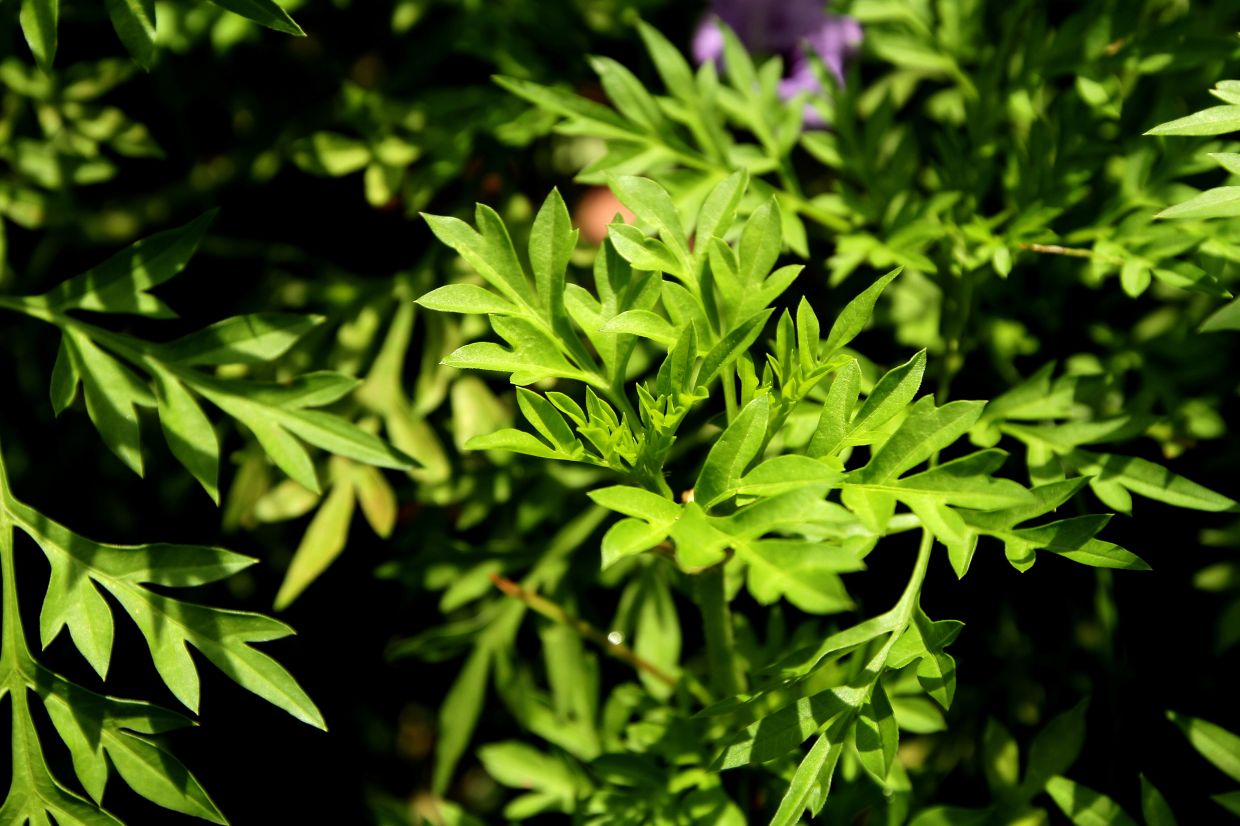 Examples of ulam include leaves like pegaga, ulam raja, selom, putat, tenggek burung, beluntas and beremi. Shoots that have to be blanched first include tapioca shoots, salang, kaduk and mengkudu. Other ulam variants include petai, jering, kerdas and okra.

In modern times, there has been some confusion as to what constitutes traditional ulam. In many restaurants and hotels, ulam stations typically even include vegetables like tomatoes, which aren’t really ulam by any stretch of the imagination.

“To me, vegetables that are imported or come from intensive agriculture should not be considered ulam because the micro-nutrients are low, so the idea must be that ulam is regenerative, medicinal food.

“According to previous surveys, ulam contains higher nutritional value in comparison with macro vegetables, so I think that is the boundary between and non-ulam, ” says Olmedo.

The nutritional value in ulam is also one of the reasons Olmedo is so passionate about this traditional edible flora. 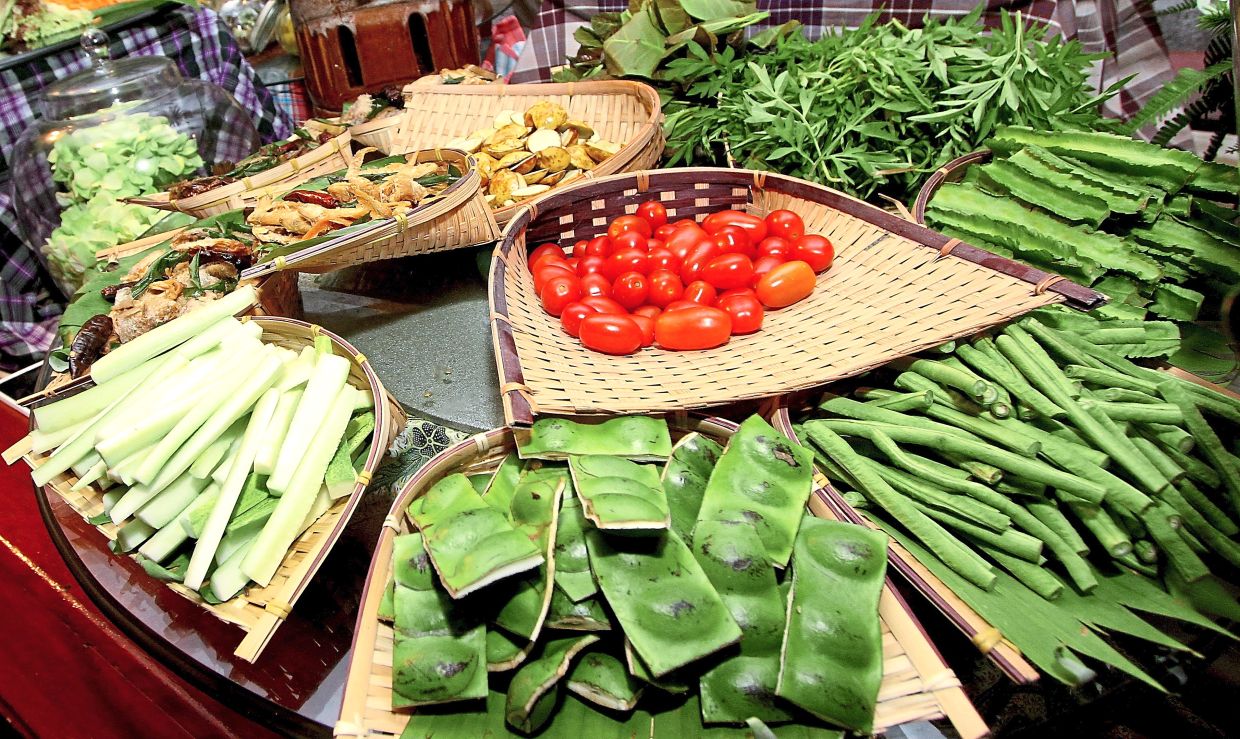 In some modern ulam stations, even macro vegetables like tomatoes are termed ulam even though they are not really ulam in the traditional or nutritional sense. — Filepic

Other ulam like ulam raja, often termed the king of edible plants – bears anti-diabetic properties and displays anti-inflammatory and antimicrobial activities. Meanwhile, gajus (the yellow and red varieties) shows very high antioxidant activities and can potentially contribute to lowering the risk of chronic diseases, according to Olmedo.

Additionally, according to retired Malaysian Agricultural Research and Development Institute research officer Rukayah Aman in her book Ulam dan Sayur-Sayuran Tempatan Semenanjung Malaysia, many ulam contain saponin, which is said to reduce cholesterol and halt the formation of cancerous cells.

The more bitter ulam like daun peria laut and pucuk cemamar are also said to be useful for natural healing and regeneration.

In terms of consumption, ulam is typically served raw or blanched alongside sambal belacan. The method of eating has always been to dip these vegetables into the fiery sambal, a practice that is also common in Vietnam, Cambodia and Thailand.

Ulam can also be julienned and incorporated into rice-based dishes like the herbaceous nasi ulam and nasi kerabu. In some northern states, up to 40 species of ulam are used to make a single serving of nasi kerabu!

In states like Negeri Sembilan, ulam is used copiously in heritage dishes like tempoyak daun racik, which makes use of up to 10 julienned local leaves and shoots. Ulam is also a regular component in local salads like kerabu and urap.

To get the Ulam School off the ground, Olmedo embarked on research-based field work in Malaysia, Cambodia and Vietnam to collect data and discover as many different kinds of ulam as possible.

Come end November 2020, all the information he has amassed will be pooled into an online repository, which will be free for anyone to view. This will include a list of local ulam with detailed descriptions and historical data, like information pertaining to the origins of the species. There will also be cooking videos, videos on how to forage for ulam, online tutorials as well as an e-cookbook. 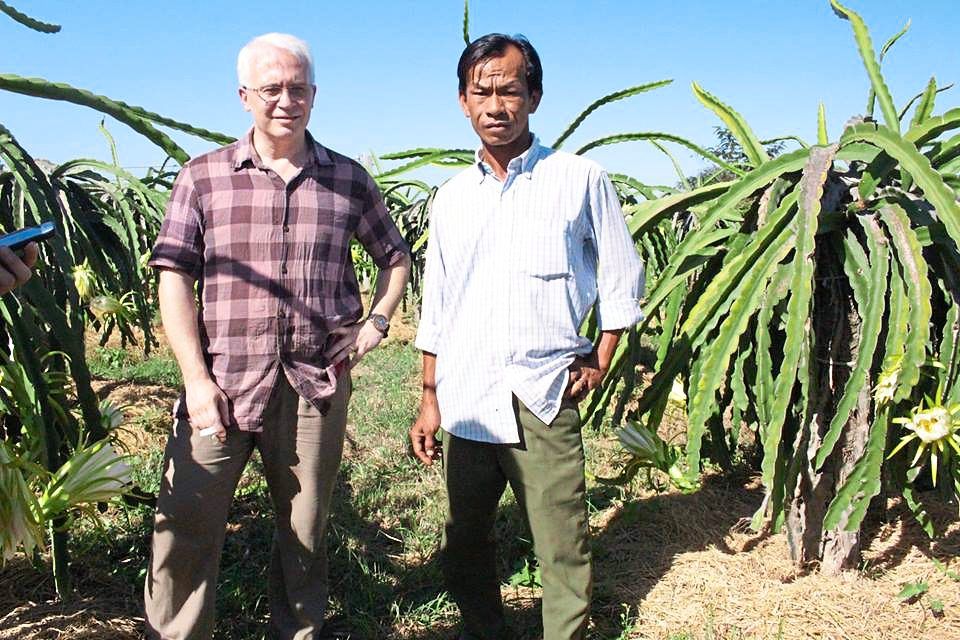 Olmedo (left) hopes that the Ulam School will increase awareness of the vast bounty of local edible ulam in Malaysia. — ERIC OLMEDO

A later incarnation of the free online school will also include geo-tagging, which will enable people to discover the ulam sources closest to them.

Olmedo also aims to hold short online courses on ulam targeted at regular Malaysians looking to bulk up their knowledge of local edible flora. These courses and a planned postgraduate course incorporating ulam will be chargeable, but Olmedo stresses that the fees will be modest.

The second component of the Ulam School – and perhaps the more interesting one – will involve two physical locations scheduled to launch in 2021, which will be host to various ulam species.

The first targeted location (preliminary agreements are already in place for this) is in the Langkawi Unesco Global Geopark where UKM’s research facility is located, while the second site will likely be in Miri, Sarawak as Olmedo has been approached by a non-governmental organisation that has a plot of land in the wild that they are interested in utilising to grow ulam.

“This will be ulam which will be more peculiar to the local edible flora of Sarawak, so that will be very interesting as we can have a botanical garden representing west Malaysia and another one representing east Malaysia, ” he says.

The main goal of the physical Ulam School is to attract both local and international visitors. 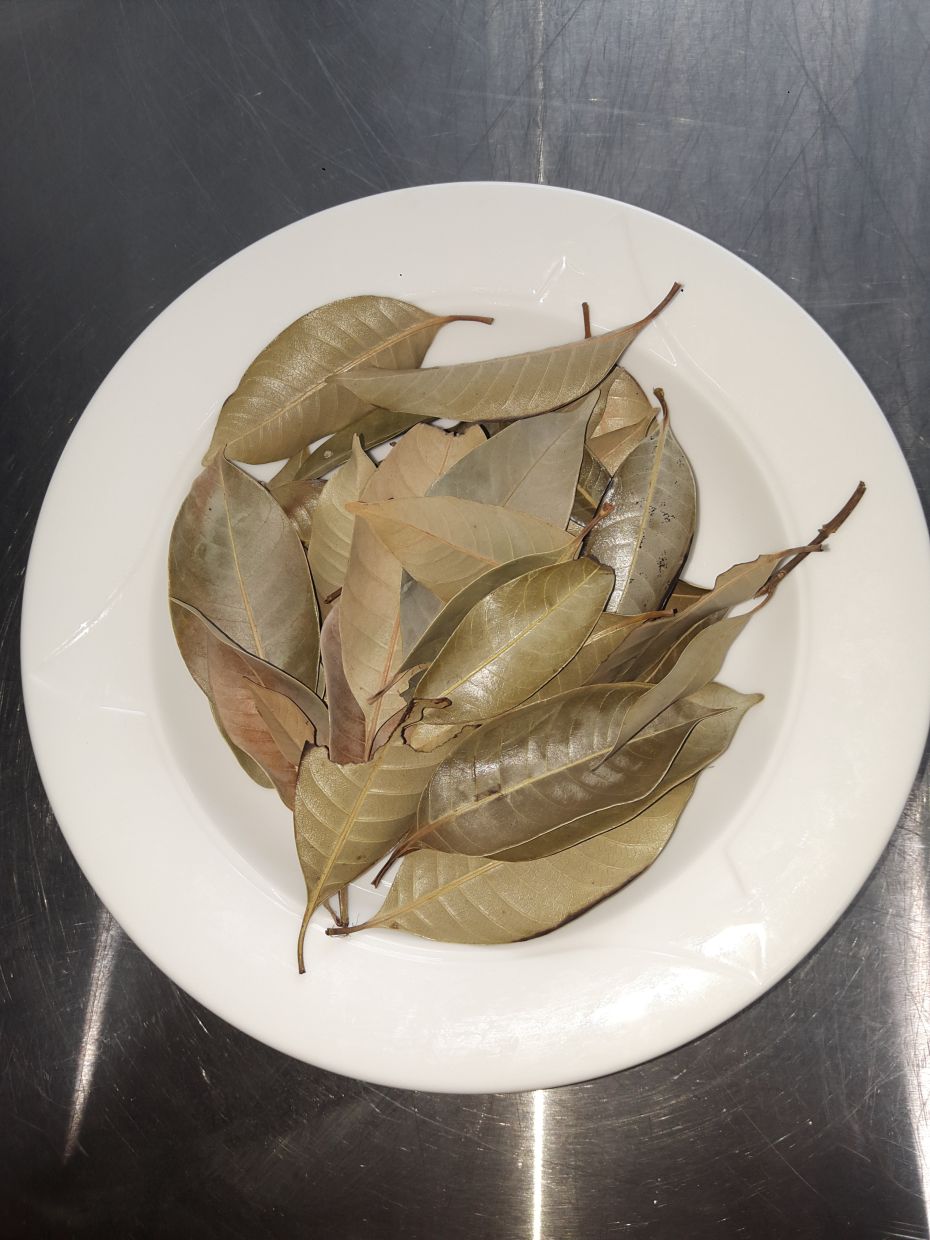 According to Olmedo, many ulam have health properties. These plum leaves he discovered in the Mekong Delta for example, decrease sugar in the blood. — ERIC OLMEDO

“What we want to achieve in the physical ulam school is to have ulam workshops, as well as take people into the jungle to forage and plant ulam with the Orang Asli ethnic minorities and do some cooking as well.

“The idea is that if we sell these packages to tourists, we will create an income generation that will make the Ulam School sustainable, ” says Olmedo.

There will also be an element of roping in the expertise of the indigenous Orang Aslis, long regarded as subject matter specialists on a host of wild flora.

“When you create a demand for ulam, you can give remuneration to the local communities that cultivate it.

“And we are targeting the Orang Asli for this, so this will give them an income and at the same time – and this is something I really believe in – it will foster social integration because if they are the one giving this regenerative food to the urban population, then they become producers and at the same time, they can become our teachers because they have been the caretakers of ulam for generations.

“So they have a knowledge system that we don’t have – they know the properties, they know how to grow them, forage them and so on, ” says Olmedo passionately.

Eventually, Olmedo hopes to create an ecosystem where people interested in ulam will be able to purchase the seeds from Orang Asli communities and plant them in their own backyards, with the idea being that a percentage of the revenue goes back to the community.

Ultimately Olmedo sees the ulam school as a necessary bridge between traditional, medicinal edible flora and urbanites who don’t really know much about the rich natural resources in Malaysia.

“Basically ulam is cheap and has a host of health benefits. It is good for the environment because it’s a short supply chain if you buy and consume locally, so there is less carbon footprint.

“And it’s a wonderful resource that is available locally, so it is just about trying to connect urban citizens with this natural resource and providing scientifically verified information so they can make sense of it, ” he says.