Curious Cook: The wonders of the French region of Correze

As a pastime, I read a lot of scientific research papers and there is certainly no shortage of new, innovative studies on Covid-19. But I had finally decided to take a break after reading a German paper about the outcomes of investigations into cardiac injuries using magnetic resonance imaging (MRI) on the heart tissues of people who have survived Covid-19. That is because the new German paper supports strongly an earlier paper from Wuhan, China, also using MRI to study myocardial injury in recovered Covid-19 victims.

If you are curious, the German paper ‘Outcomes of Cardiovascular Magnetic Resonance Imaging in Patients Recently Recovered From COVID-19’ found 78% of people with initial cardiac conditions who survived Covid-19 ended up with abnormal MRI scan results, indicating either permanent or long-term damage to the cardiovascular system, primarily the heart.

This statistic was established against people who have not been infected with Covid-19. They fall into two groups: one without heart issues (where MRI defects were found to be zero) and the second group are people with known cardiac diseases. The sobering statistics were comparisons against people in the second group. People with cardiac issues and Covid-19 show a highly significant increase in MRI-observable myocardial, non-ischemic and pericardial defects over the second group.

To be impartial, the numbers of patients tested were small; 207 in total in the German study and only 26 patients in the Wuhan study (and included only those reporting cardiac symptoms). But the reality is it is difficult to find any good news about the virus. I can continue with studies into how Covid-19 can damage or exacerbate existing conditions in the brain, liver, blood, lungs, kidneys, pancreas, pituitary glands, etc.

But for this article, I will instead express my thoughts about visiting another region, eating the best food and drinking the best liqueurs they have there.

We have some old friends in Correze, which is over two hours by car from home. The gentleman is a superb amateur cook, and his discerning wife keeps him on his toes. It was a long-standing invitation and the teeming tourists in our own village were getting tiresome so it was a perfect time to escape and play tourist ourselves. Also, it is now mandatory to wear face masks in indoor public places and this applies even to outdoors in some towns and villages. Therefore, risks are low enough to be acceptable, even though France is undergoing what looks like the signs of a second wave. 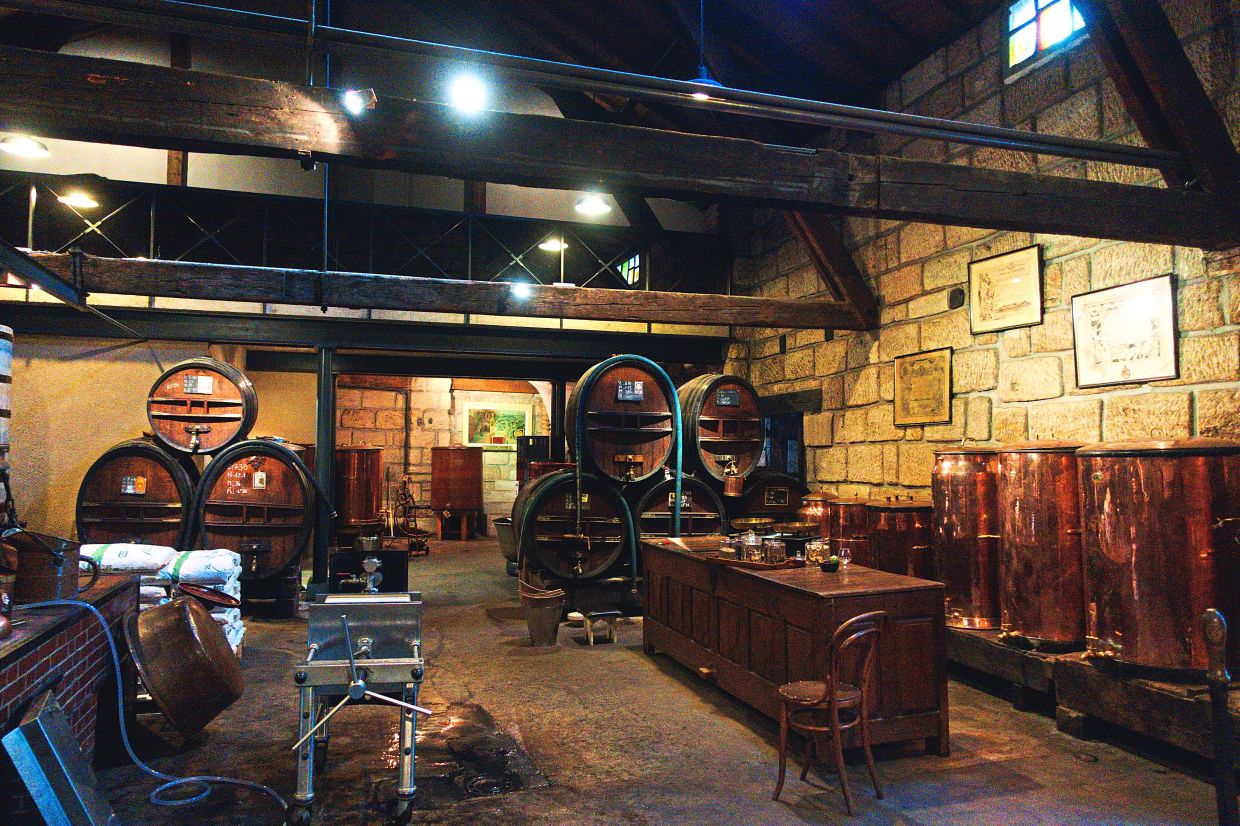 The Correze is a region I have never visited. It was originally part of our Auvergne region but politics intervened and now it is in new department called Nouvelle-Aquitaine. As it adjoins the Lot and Dordogne (Périgord) regions, it has a strong culinary tradition, enhanced considerably by the low cost of great food produced in the area. For example, a duck weighing four kilos costs only €10 (RM49) – this is practically free, but more on this later.

The area is also known for its attractive architecture and old castles, which tend to date back a few centuries earlier than the more famous castles in the Loire valley. The drive was along pretty roads and the landscape slowly changed from rugged volcanoes to hilly leafy forests along the banks of various impressive rivers such as the Dordogne, Corrèze, Diège, etc. The Dordogne in particular is temperamental, and have caused severe floods in main towns such as Bergerac. But we headed to a quiet village outside Brive-la-Gaillarde, though people often shorten the town’s name to Brives (which can be confusing if you search for it on some maps).

A homemade lunch featured a Périgord starter of foie gras, some duck rillettes (a meaty, stringy paste made with finely-shredded duck meat held together by duck fat) and some local sausages with salad from his own garden allotment. It was accompanied by a regional wine and a local fennel liqueur digestif which was so pleasantly interesting it became a priority to acquire a bottle myself.

After lunch, we acted like tourists and visited several pleasant old villages and small towns nearby. I initially noted these scenic villages actually had fewer visitors than my own hamlet, but that was until we arrived at Rocamadour. Most tables were taken and every empty table was booked, and we had to suffice with some beers and fizzy drinks rather than a proper tea. As a tourist location, it was pretty enough, but Rocamadour would not top my list for places to re-visit, especially in summer.

Dinner was back at my friends’ home where we had pan-fried lamb (agneau) chops from the Lot region. Technically it was Agneau du Périgord but the farms now stretch into the Lot as well. Served with haricot beans from his allotment, the lamb was fatty, tasty, and went surprisingly well with a robust Marcillac wine from the Aveyron region.

This is an unusual wine made mostly from the Fer Servadou (or Mansois) grape, and had been described by a better wine connoisseur than me as “ferrous”. It turns out that my friend was brought up in Aveyron, and when he suggested a breakfast from his home region for the next day, I readily agreed, despite his wife’s objections.

The next morning began with the Aveyron breakfast, which was veal tripe stuffed with various pork bits and chopped ham, and then cooked in a tomato sauce until tender and the smell had (mostly) dissipated. As I like offal, I found it very good but perhaps a touch too emotive and heavy for breakfast.

Still, it primed me for a long stroll after a drive to Les Jardins du Manoir d’Eyrignac, a whimsical but beautifully maintained 10-hectare garden with several themes for different areas mingled with some odd metal art sculptures. Most visitors were wearing their face masks even though they were only about 250 people across the whole space. Entry fees were around €13 (RM58) per person, and worth it for the experience. The columnist enjoyed some delicious French food in the region, which is known for its foie gras and duck dishes.

Afterwards, we managed to avoid the heaviest part of a sudden rainstorm and arrived in time for lunch at the Château le Fleunie, about 30 minutes away. The food was as good as the last time we ate in a top restaurant years ago in Sarlat in the Perigord, which means that the menu invariably offered foie gras and duck, plus other options such as veal, beef and freshwater fish. I was secretly hoping for some truffles in the dishes but it appears we were too early in the year for fresh tuber melanosporum (Périgord black truffle). Menus range from €35 to €75 (RM175 to RM371) plus wine (and they offered a good red Bergerac under their own label).

Some digestifs after lunch reminded me about the fennel liqueur and we went to the Denoix distillery where it was produced in Brives. It seems the distillery was versatile and offered more than strong alcoholic fennel spirits. They also offered fruit/coffee/chocolate liqueurs and a remarkable walnut liqueur made from young green walnuts. We liked several of them and bought several bottles of unique spirits to share with friends at home later. The prices were fair for high-quality spirits, between €30 to €35 (RM148 to 173) per bottle. My friend later shared his recipe for producing walnut liqueur and offered us a taste. It would be fair to say the distillery has no concerns about a new competitor.

Most French people are diligent about wearing masks and maintaining social distancing. We did not shake hands or kiss with our friends as normal, and every establishment has alcohol gels for maintaining hygiene on entry. At another restaurant where we had dinner, the manager told us he could fine us €135 (RM669) per person for not wearing face masks when going to pay the bill.

All this is well and good, but this also means that many people, especially young people, are unable to experience the wide spectrum of bacteria which keeps the immune system in top condition and prevents the onset of allergies, for example. It is hard to suggest a proper balance as sanitation has now gone to an extreme, and is likely to remain so for quite a long time. All one might suggest is eating more raw/fermented foods and live cheeses to compensate in some way for the lack of ingested environmental fauna. Food played a prominent role during the columnist's trip.

About the four kilo ducks for €10, these are the ducks from which the livers had been extracted. A single foie gras weighs between 300 to 600 grams and once extracted by the foie producer, the rest of the duck is sold at huge discounted prices. The locals are well aware of this and use the ducks for confits, rillettes, duck bone soups, magrets (breasts), etc. The regional duck breed is called the Moulard and is a cross between Muscovy and White Pekin ducks. It is also possible to buy only the bones after all the meat had been cut away, and these bones cost just a few cents per kilo.

I have asked to get a few kilos of such bones to make a duck soup with preserved cabbage. It should be interesting.