The Wuhan Huanan Wholesale Seafood Market is alleged to be the point of origin of the coronavirus, and it is thought that some of the exotic animals harboured the virus and spread it to humans. — AP

LIFE on our planet is a complex, interwoven web. As humans, we cannot survive alone by ourselves. Like all living creatures, our Palaeolithic ancestors required warmth, water, shelter and other basic requirements of existence.

In particular, survival depended very significantly on acquiring energy (in the form of proteins, fats and carbohydrates) and nutrients from other species of animals and plants. There is considerable evidence to suggest that our brains and intelligence had originally evolved to better adapt to the tasks of acquiring such prerequisites of Palaeolithic life.

Survival needs were constant sources of concern during much of human history and it is no trivial achievement that most people alive today in modern societies have very few anxieties about access to basic survival requirements, such as food, clean water, clothing and housing.

Success at a price

However, our success at becoming the dominant, most successful species on Earth comes at a price. The acquisition of basic resources such as water, shelter, warmth, etc, requires people to share habitats with many other species, not all of which are sympathetic to human life. Eating food (e.g. animal proteins, fats, etc) also exposes humans to a wide variety of harmful bacteria, fungi, parasites and viruses (pathogens).

People can also catch diseases from their pets and endemic insects in the environment. According to the American Center for Disease Control & Prevention (CDC), six out of 10 known diseases which affect humans originated from another species, along with three out of four new infectious diseases.

Such cross-species diseases are called zoonoses and humans catch them via mechanisms called zoonotic transmissions or zoonosis.

The main forms of zoonotic transmission from other species to humans are via the digestive system, dermal contact/invasion (eg. insect bites) and inhalation. Zoonoses can also be transmitted from humans to other species via the same routes – these are reverse zoonoses and the process is called zooanthroponosis.

The coronavirus is covered by surface projections called virions which contain peplomers that determine if a host cell is suitable for infection. — MAM/CDC/Handout via Reuters

Mostly, zooanthroponosis happens in poor sanitation situations, where human airborne diseases and/or fecal matter are allowed to contaminate animal environments. This is an important issue which is seldom highlighted. It means that the livestock we maintain for food can harbour and act as a constant reservoir for diseases such as methicillin-resistant Staphylococcus aureus (MRSA), various kinds of influenza viruses, parasites such as Cryptosporidium parvum, Ascaris lumbricoides, etc. Diseases which are transferable from humans to animals can definitely return to people when conditions are right.

Although zooanthroponosis is a valid concern, zoonosis is a much bigger worry. The wide variety of other forms of life on Earth means that there is a vast active pool of pathogens all around us.

Many species commonly harbour various types of bacteria, fungi, parasites and viruses which are benign in their host species but may be virulent to other species (eg; salmonella, escherichia coli, tuberculosis, campylobacter, etc). 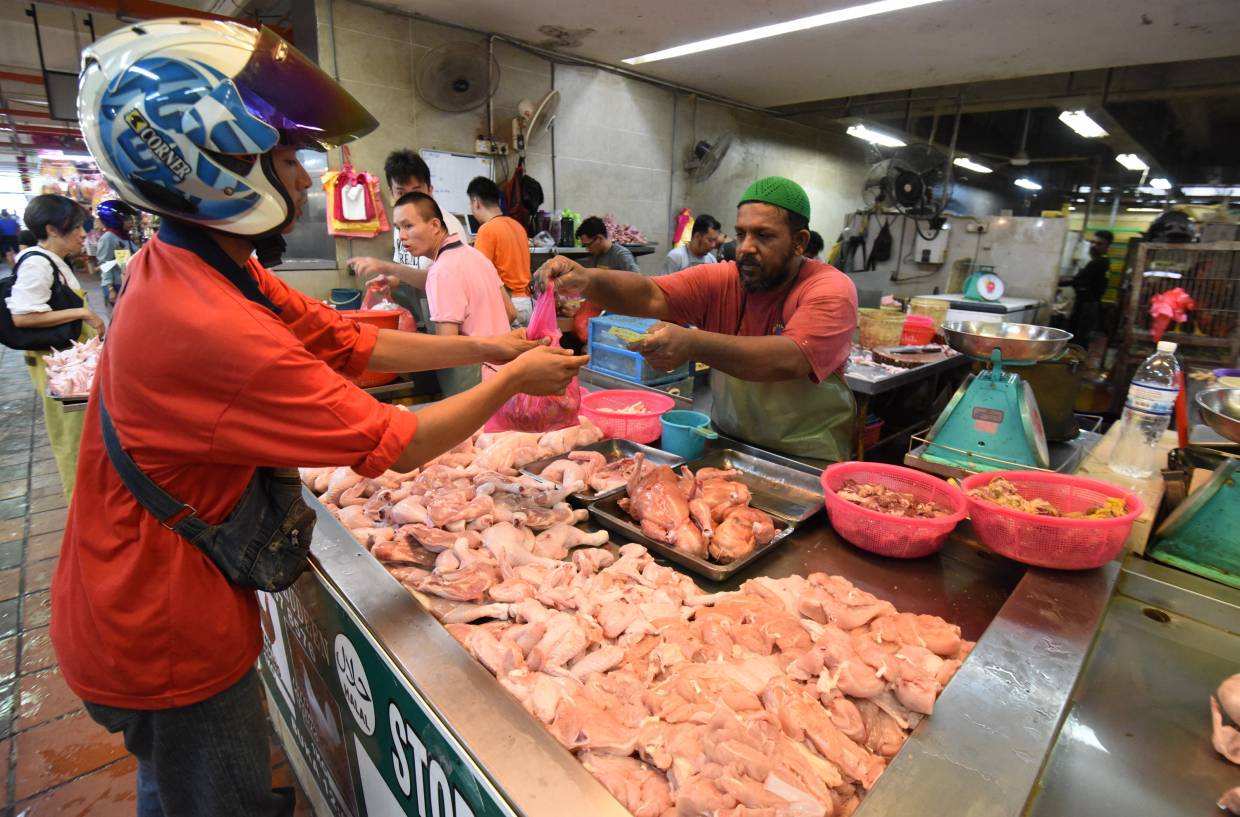 Meat, poultry and seafood can sometimes harbour bacteria like salmonella that can be harmful to humans. — Filepic

By observing good basic hygiene, our sanitation habits keep us mostly protected and usually oblivious to many zoonoses. However, once in a while, this situation changes and then things can quickly run out of control. This may happen because of widespread contamination, such as a polluted food supply. Or more commonly these days, pathogens develop resistance to the antimicrobial drugs which we use to treat pathogenically-related diseases – this can happen with the over-use of such drugs during the production of meat.

At random intervals, but usually associated with some form of human activity, a new pathogen can evolve/mutate from previously benign microorganisms in another species which can then spread and affect humans. The most notable pandemic at the beginning of 2020 is likely such a mutation, which resulted in the Wuhan Coronavirus, designated medically as 2019-nCoV.

If you are not aware, 2019-nCoV is part of the Coronaviridae family of viruses, in the Nidovirales order. In common with other viruses, it is made up of ribonucleic acid (RNA), and 2019-nCoV is interesting in that its RNA genome is 29,903 bases (components of genetic code chains) in length, one of the longest genomes for any virus. It is called a coronavirus because the virus is covered by surface projections called virions which contain glycoproteins known as peplomers – overall the visual image under an electron microscope is of a 125 nanometre blob surrounded by a crown or corona. It is the peplomers which determine if a host cell is suitable for infection.

If so, then the virus attacks by binding the virions via peplomer glycoproteins to host-cell receptors and fusing itself into the cell membrane. The virus then replicates several times inside the cell which is killed in the process, releasing a horde of new viruses to spread within the body.

2019-nCoV appears to target cells within the human respiratory tract, resulting in pneumonia, respiratory failure and death in extreme cases. The mortality rate appears to be between 2%- 3%, compared to 0.1% for the common flu. There is currently no known cure or vaccine against the virus.

Although 2019-nCoV is a respiratory disease, it is related to the human food supply. The origin of this virus is very probably a wet market in Wuhan, China, which sells various kinds of wildlife for consumption by humans.

It would appear someone brought in one or more exotic animals which harboured 2019-nCoV (or a variant which quickly mutated into 2019-nCoV) to sell within that market. It is also feasible the virus evolved within that market over a period of time, adapting from an animal virus into a virulent strain which targets humans. Coronavirus is extremely contagious, and unlike SARS, can spread even during the incubation period when no symptoms are present. — AFP

Probably the most well-known example of zoonosis is AIDS which is transmitted by the HIV virus; this deadly disease probably originated several decades ago from chimpanzees eaten in Africa as bush meat.

One might assume zoonosis is more likely from mammals and other warm-blooded creatures with which we can share over 95% of our DNA. It may not be so simple.

Many examples of zoonosis do not involve mammals, such as insect-borne diseases (eg; malaria, Lyme disease, dengue fever, etc), which can affect humans in their home environments. Hence, it may not be correct to assume similarity of mammalian/avian DNA to human DNA means minor mutations to wild pathogens may allow them to cross the species barrier, although there is plausibility to this hypothesis.

In short, we do not know the exact factors which trigger foreign microorganisms to turn pathogenic to humans, but it is certain it happens very often, perhaps even every day. However, the only times we notice are when new pathogens also develop viable means of propagation and contagion. Else they will die out as quickly as they arise.

As an aside, SARS was not contagious during its incubation period, but 2019-nCoV is fiercely contagious at all times, even during incubation before the development of any symptoms.

As such, it is certain 2019-nCoV infections will significantly exceed the numbers affected by SARS. An earlier 2012 study estimated 56 zoonoses were responsible for around 2.5 billion cases of human illnesses and 2.7 million human deaths every year.

The top 13 zoonoses were responsible for 2.4 billion cases of human illnesses and 2.2 million deaths annually; all 13 were related to livestock and/or associated with wildlife. The most deadly were gastrointestinal diseases caused by zoonotic bacteria – curiously most of the 43 newly-detected zoonoses between 2004 and 2012 were viruses, not bacteria.

Human activities are making zoonosis more likely over time. The incessant use of antimicrobials to maintain livestock welfare means pathogens in livestock are developing resistance to the same drugs needed to treat human diseases.

In 2019, the World Health Organisation estimated at least 700,000 humans die each year from antimicrobial resistance – this figure is projected to rise above 10 million deaths annually by 2050.

Each new pandemic (and ensuing political excuses and panic) confirms we do not know much about the evolution of new diseases. As such, it makes no sense to waste our limited antimicrobial armoury against diseases by feeding commercial livestock the same drugs we need to treat ourselves.

And it makes even less sense to crowd together wild animals, livestock and humans in dirty markets as they do in China, creating a pathogenic stew which will likely result in future pandemics. The sale of wild animals for food was banned after the SARS epidemic, and it is unclear why this ban was lifted.

The irony is it is expanding economic wealth which increased the demand for wild animals in China and meat in general globally. Most of the new human maladies over the last century have been linked to livestock and wildlife.

If the improved economic well-being of people can be channelled into the creation, production and consumption of high-quality plant-based foods, then this sequence of global pandemics may one day be broken.