A wok on high heat is part of the formula for good char kuey teow. — Photos: KAMARUL ARIFFIN/The Star

Ask anyone in the Damansara Utama community to recommend a good plate of char kuey teow in the area after hours and most likely, Tony’s Char Kuey Teow will be mentioned.

The stall in Uptown Hawker Centre, a food court at the Uptown 7 building, has been around for 34 years.

The late Mohd Shahruddin Ng, a Chinese Muslim known as Tony to most, set up the family business.

Today, his wife Amma Mohd Noor runs the stall. Also referred to as “Mummy” by customers, she enjoys sharing her life story with diners.

The couple came from families that were in the food business — Tony’s family has a restaurant in SS2, Petaling Jaya while Amma’s family does wedding catering.

The stall had family support from the very start.

“Our parents helped us until they passed away. Sometimes, my nephews and nieces are here too and so are my children, ” said Amma, who has three daughters and a son.

After Tony passed away in 2016, Amma took over the business to continue the family legacy and her children have been by her side.

The char kuey teow is a bestseller here as it is prepared the Chinese style with soy sauce as the main seasoning.

“We use soy sauce instead of salt, ” said Amma.

As expected, the char kuey teow was perfectly cooked with that wok hei taste and it was not soggy nor dry.

The rice noodle strands were easy to pick up with chopsticks and there was a good mix of cockles, bean sprouts, soy sauce and egg in each bite.

The secret to the dish, she said, was the fiery heat from the stove.

“What you cook at home will taste different from what you have at the stall because of the fire used.

“When you throw the ingredients into the wok, you can instantly feel your hands burning, ” Amma explained about cooking at the right temperature.

“The kuey teow is cooked in two minutes as a result.”

Fried rice and fried tang hoon are some of its other popular dishes.

The stall’s fried rice is my favourite as it is a take on Chinese fried rice but without peas and carrots and the rice is scrambled with eggs.

The fried rice is usually paired with a sunny side up and a small serve of cili padi in soy sauce is served alongside.

The char kuey teow is priced at RM7 while the fried rice is RM8 and fried tang hoon RM9.

The tang hoon or glass noodle dish costs more as the noodles are imported from China.

“The glass noodles are made from green pea starch as there are no locals specialising in making this particular noodle, ” said Amma.

Tony’s Char Kuey Teow stall opens from 6pm until midnight and closes every fortnight on Monday.

Stall 1086 is next to a flight of stairs, on the right side of the entrance to the food court at Jalan SS 21/39, Damansara Utama in Petaling Jaya, Selangor. A wok on high heat is part of the formula for good char kuey teow. — Photos: KAMARUL ARIFFIN/The Star

Some of the stall’s customers enjoying char kuey teow after a long work day.

Tony’s Char Kuey Teow has cockles, taugeh and egg and comes with a condiment saucer filled with soy sauce and sliced cili padi. 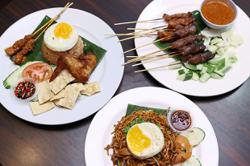