The curious phenomenon of people watching other people eat online

In her small, snug apartment in Bangsar, Kuala Lumpur, Elaine Chiou heats up a small pot of noodles and quickly ladles the contents into a bowl. Picking up a pair of chopsticks, she then moves purposefully towards her laptop, strategically positioning her dinner in front of it.

In a matter of seconds, she has tuned in to her favourite YouTube channel and as the video begins, she starts eating her meal, her eyes rarely leaving the screen.

In today’s digital-savvy age, this barnacle-like attachment to the screen isn’t really all that abnormal. Except that the particular video that Chiou is engrossed in is rather peculiar.

Because if you inch closer to see what she’s watching, you’ll suss out that Chiou is eating dinner while watching a YouTuber consume an extraordinarily large quantity of pasta.

And this, ladies and gentleman, is the wonderfully weird world of mukbang.

Mukbang is a trend that dates back to 2009 and has its origins in South Korea.

A portmanteau of the words

The essence of these videos basically involves online personalities eating copious amounts of food, purely for the sake of entertaining viewers. 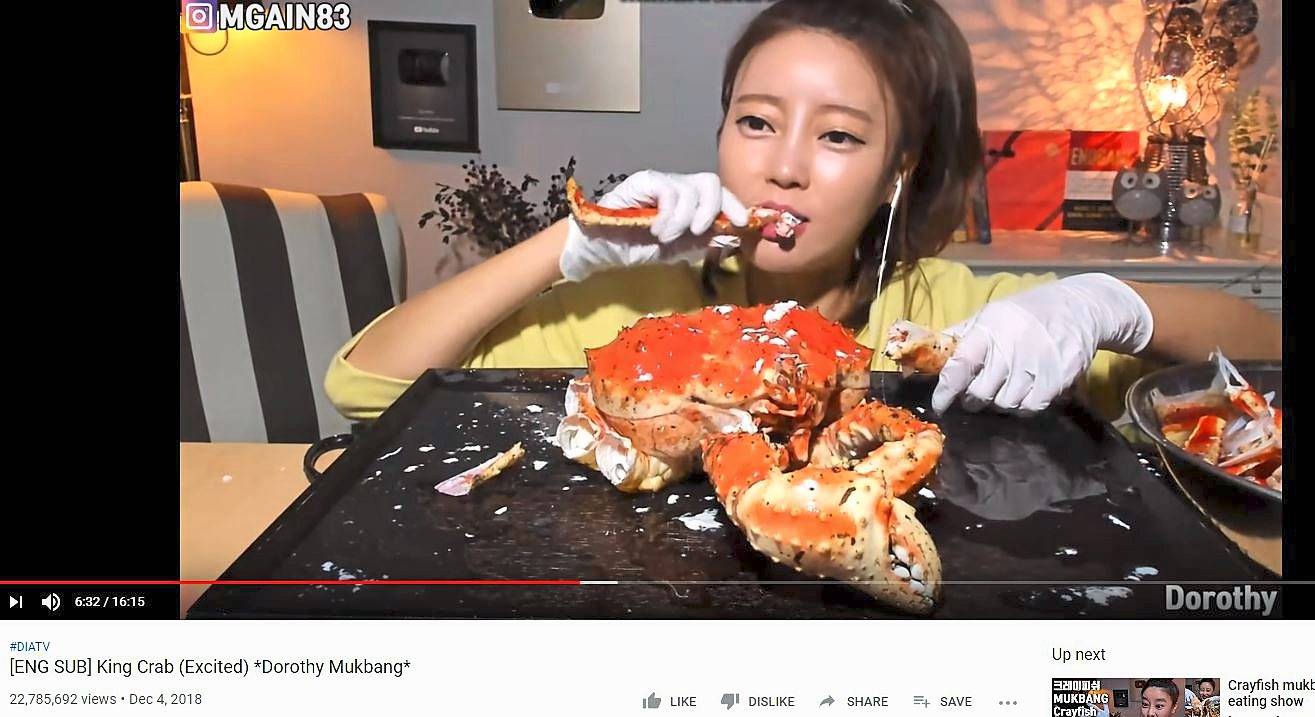 As the trend spread throughout the world, YouTube mukbang videos started to sprout all over.

In Malaysia, the mukbang trend is relatively new. Based on Google Trends data derived from the past five years, searches for YouTube mukbang videos were non-existent (0%) in 2014 but have picked up dramatically since then, with the highest interest (100%) generated in June and October this year.

While there is no conclusive data on who the target mukbang demographic is, younger people seem to be the ones increasingly drawn to these videos.

Student Elim Poon, 22, for instance was introduced to mukbang through her classmates at university and has been hooked ever since.

She now watches mukbang videos at least four times a week, over lunch and dinner, and claims the videos give her a sense of superiority and something to gloat over.

“Mukbang videos typically feature YouTubers eating large amounts of food and most of these foods are high-calorie foods. 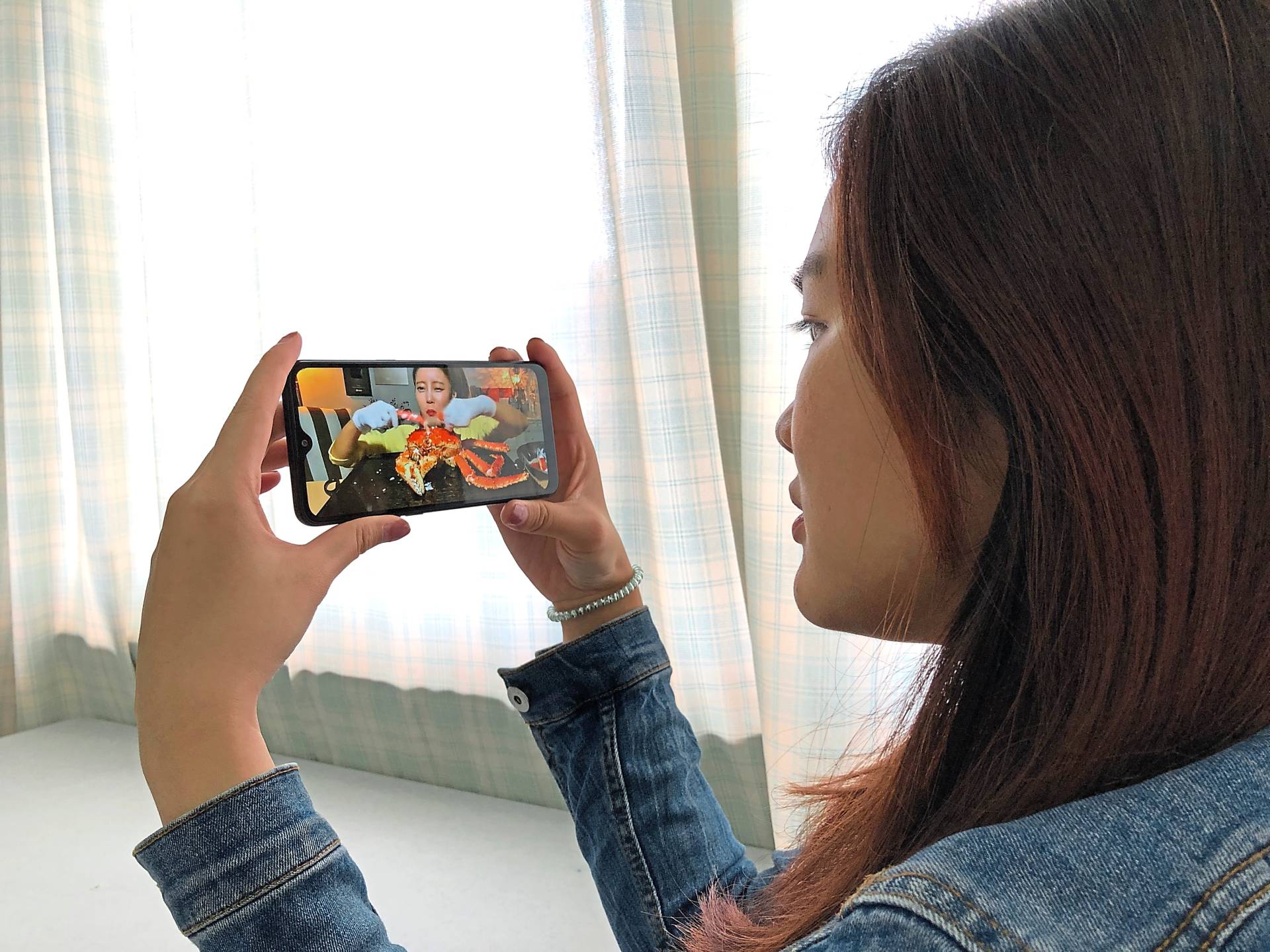 Pek says once she feels connected with a mukbang YouTuber, she generally wants to find out more about them. — CHERIE PEK

“It gives me a sense of satisfaction (while I am eating a salad) and self-comfort that they will be gaining a lot of unwanted and unhealthy weight while I carry out my diet, ” says Poon.

Many mukbang fans agree that these videos help curb cravings or even miraculously make them feel as though they are “eating” too.

“Sometimes when I am hungry, there’s no food around. Watching mukbang helps to sort of ‘fill me up’.

Also, when I have cravings for certain foods that I cannot get my hands on, mukbang is the best way to beat the cravings, ” agrees 24-year-old student Nur Dini Mohd Nadzri, who watches mukbang videos at least five times a week.

This concept of feeling sated from watching other people eat is echoed by other mukbang fans.

“When I am watching mukbang, there is so much food that I’m like ‘Oh, I feel very full!’ It’s like I am vicariously eating through the mukbangers, ” says Chiou.

When mukbang was first introduced in Korea, people theorised that the genre’s popularity was partly due to the fact that it was a way for lonely Koreans to have a virtual meal with another person.

For some Malaysians, mukbang videos have exactly the same impact, especially as most mukbang fans tend to watch these videos by themselves, or as Chiou confesses, “It’s my guilty pleasure – I don’t watch it with other people.”

Chiou adds that watching mukbang has become so normal to her that it doesn’t feel strange to dine with an online “friend”. “It started off as these people were my dinner companions, but after awhile, you’re so glued to your phone or laptop, it just becomes normal mealtime, ” she says. 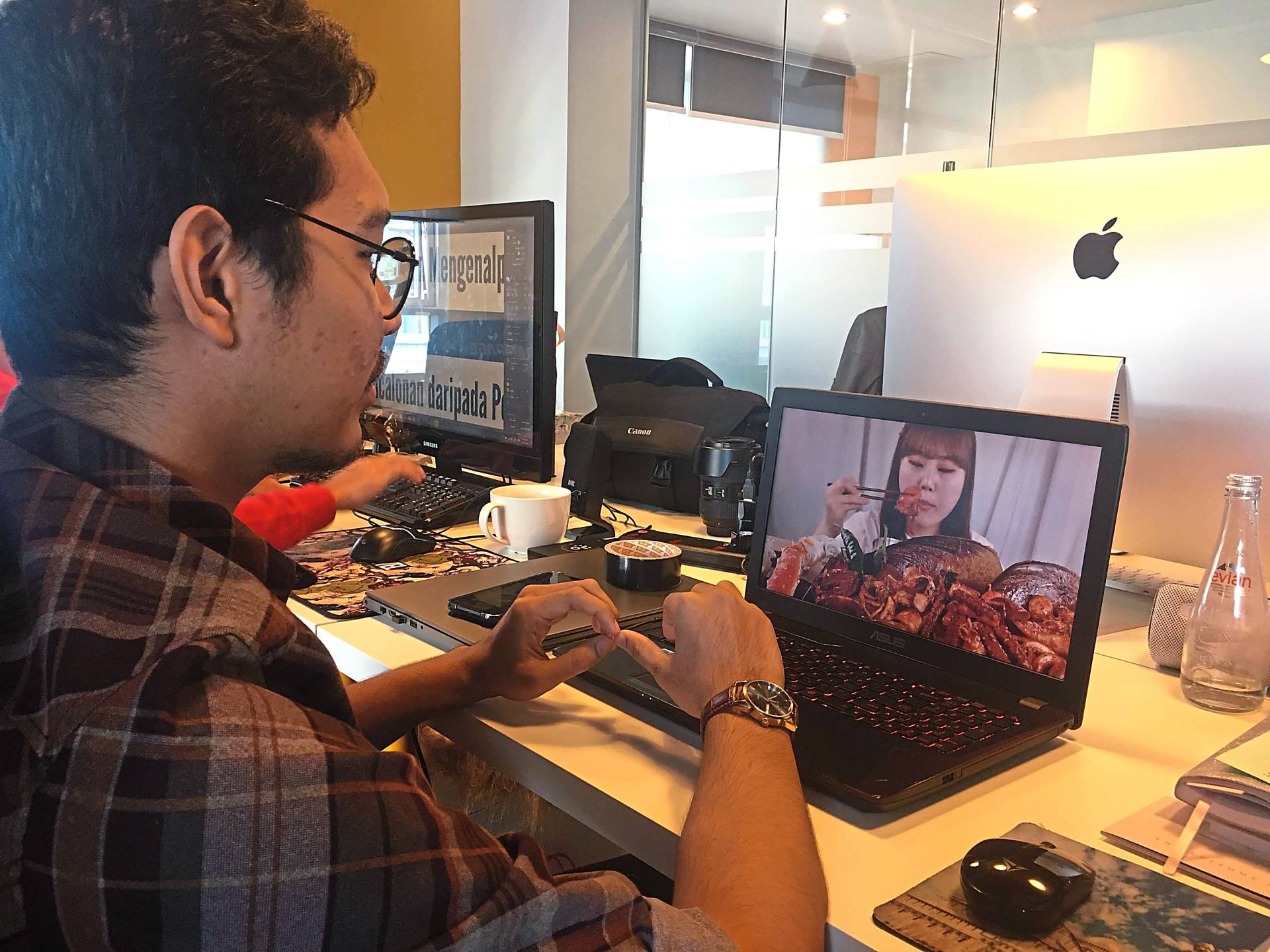 Many young people have also found themselves addicted to mukbang videos after developing an open-mouthed fascination with the unnaturally large volumes of food mukbang YouTubers are able to consume.

In fact, a quick look at mukbang videos on YouTube will yield results like ‘I ate everything on McDonald’s’ new menu’ and ‘The 10,000 calorie challenge’. Many popular videos also revolve around crazy-spicy food like the world’s spiciest chip (termed the one-chip challenge).

“I love watching mukbang YouTuber Veronica Wang because of the portion of food she eats – it’s a lot. She just really enjoys her food without a care in the world and that is how a mukbanger should be, ” says Dini.

Chiou says these YouTubers’ unreal eating abilities have fuelled her appetite for more mukbang videos. “They all have different types of challenges and content to entertain you, like eating 10 packets of spicy noodles. And you just watch them because it’s so crazy! So I just watch it because it’s so over-the-top. That’s how I got sucked into it, ” she says.

Currently, some of the most popular mukbang YouTube video searches (based on Google Trends data worldwide) are for things like corn dogs, samyang ramen and giant octopus, among others.

Poon says she thinks the data is spot-on, as it reflects her viewing patterns too.

Another growing component in some mukbang videos is ASMR (autonomous sensory meridian response) popularised by mukbang YouTubers like Zach Choi. 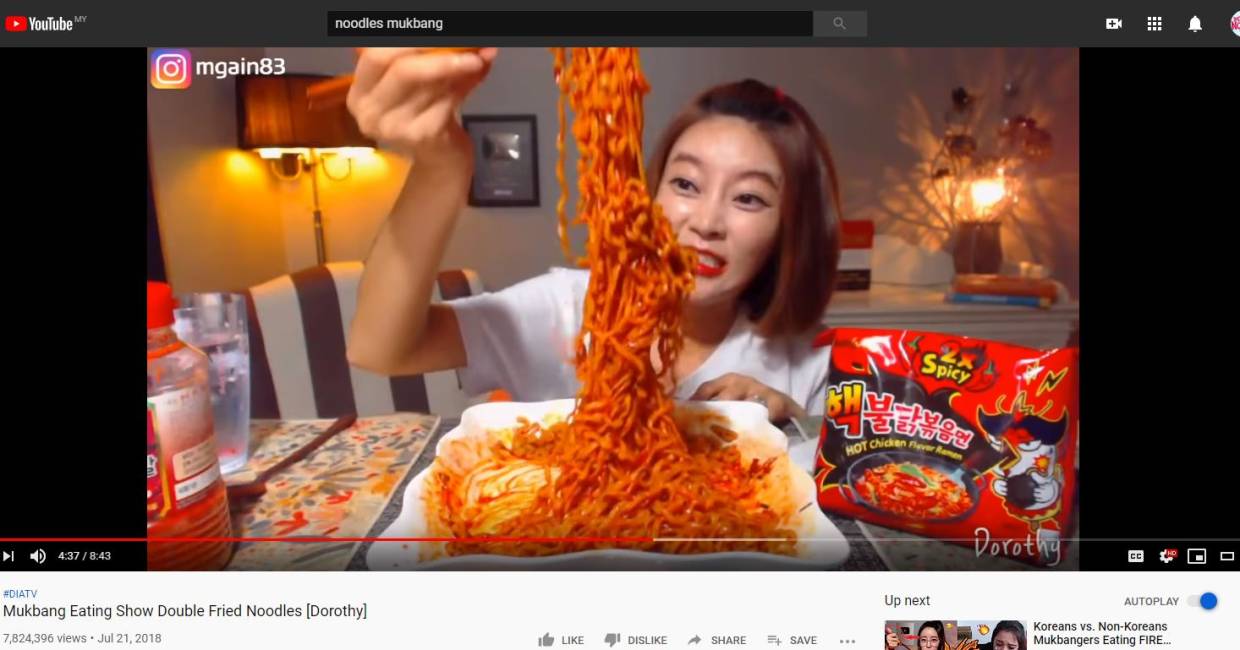 Some people who watch mukbang videos say that seeing others eat so much food actually helps curb their own cravings. — YouTube

In these videos, audiences are soothed (many report getting a tingly sensation) by the sounds of people eating things like raw cauliflower, fried chicken and many other foods.

Most often, this effect is accomplished effortlessly as audio equipment is simply placed near YouTubers’ mouths for added effect.

“I really like the sound (most of the time) of people chewing, ” admits 23-year-old Mohd Zakwan Shahari, an avid mukbang fan who watches these videos on weekdays and weekends, and even in his office.

Chiou says she is also a fan of this heightened chewing, swallowing and slurping sounds produced by some mukbang YouTubers.

“They try to serve the audience, so if it is a crunch, or the rustle of something opening, it captures the sound in good quality. I definitely enjoy it because it is done well, ” says Chiou.

What’s also very interesting about mukbang videos is how different one mukbang YouTuber can be from the next. Some YouTubers (like Nikocado Avocado) talk in-depth about their personal lives while others simply chat about the food they are eating. And these different styles draw different fans.

Poon, meanwhile, says she has developed an affinity for YouTubers who focus solely on the food. “I am only interested in what they are eating, not their lives. It is pretty annoying for me when a mukbang YouTuber talks about his or her life while eating, ” she says.

Whether it’s constant chatter, loud chewing or simply the picturesque view of someone eating something delicious, it is this connection with viewers that keeps many mukbang fans coming back for more. 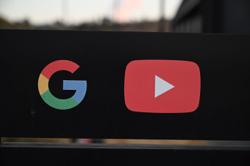 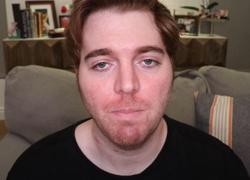