Pisco KL’s interior has been described as industrial with a dash of pop.

Off the mainstream stretch of bars and restaurants in Bukit Bintang, Kuala Lumpur, is Jalan Mesui.

This small stretch, two roads down from Changkat Bukit Bintang, has seen venues and eateries come and go.

One that has remained and even weathered the past few years is the long established Pisco KL.

The Latin-inspired bar, restaurant and upstairs lounge continues to keep the night alive here, set next to a bed-and-breakfast, a couple of boutique eateries and a boutique hotel.

One good thing about this place is its approach to the South American and Spanish cuisine that started off with the bar more than nine years ago.

It continues to recognise these influences with an increasing variety of some of the most succulent Spanish tapas while retaining its Peruvian cuisine; a unique blend of indigenous and colonial cookery traditions, with influences from Andean to Spanish, Japanese and Chinese to African and Italian.

These days, that focus has expanded to include Mexican tacos, Iberico cold cuts and ham, and also paella, to name just a few.

The Peruvian signatures of ceviche (raw marinated fish) and Peruvian anticuchos do remain a menu staple here, as well as their Arroz grilled chicken.

Peruvian cocktails also remain – Pisco Sour being one of their long-time signature cocktails on the menu, along with other signatures such as Cuzco and best-sellers like Chilli Passion Martini.

Dozens of other cocktails also fill the menu.

After dinner is when Pisco KL acquires its unique character, encouraged by the raw and industrial sexy look of the interior that caters to the unique mix of residents in the area.

The decor has been described as industrial with a dash of pop.

The exposed walls are adorned with just the right amount of blown-up black and white photographs of pop icons, paintings inspired by films and wall art.

Entertainment, of course, makes a grand return after the long shutdown.

Live performers such as Meyviss (Latin), Latin Asia, Saint Kylo, Ross Faren as well as various DJs from the local scene have already graced upstairs and downstairs, providing some much-needed music and fun for visitors.

It’s all moving forward again for Pisco KL as their 10th anniversary beckons early next year. 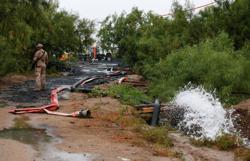