Known for its tender meat, the duck from Perak is the perfect main course for Cata’s four-course French wine and Calvados pairing dinner.

For a French twist, it was paired with barley risotto, pumpkin puree, orange-glazed “turning vegetables” and pomegranate jus.

Turning vegetables is a classic French culinary technique that forms vegetables into even barrel shapes to ensure they are evenly cooked. They are also pleasing to the eye.

“Duck and orange is a classic pairing in French cuisine.

“The meat was pan-seared until fragrant while the turning vegetables were cooked with orange reduction.

“This combination will give diners something new to enjoy while challenging their taste buds, ” Ng explained at the restaurant in Plaza Damansara, Kuala Lumpur. 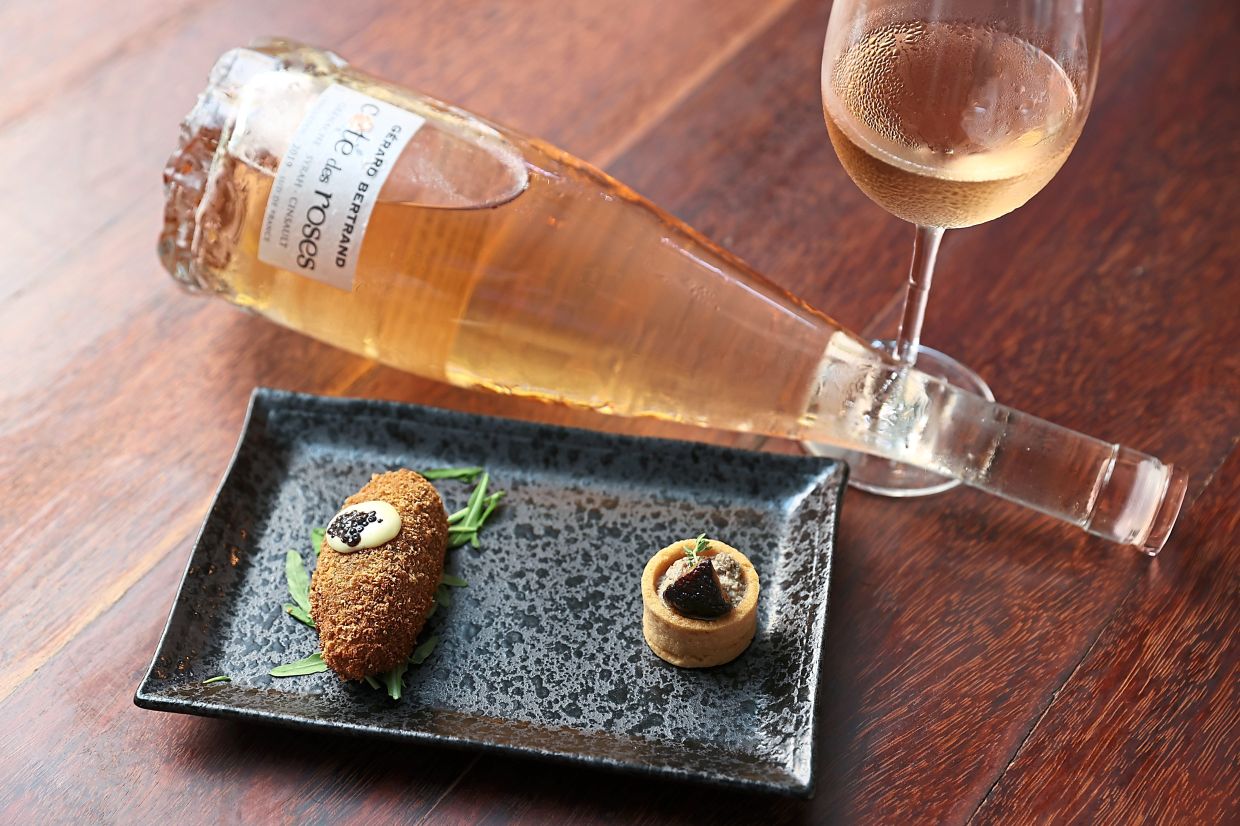 The pinkish duck breast was juicy while the thin layer of fat between the skin and meat that gradually thickened towards the edge of the breast further enhanced its flavours.

Popping the pomegranate seeds that peppered the dish gave a burst of sweet and fruity flavour that complemented the entire dish.

It was paired with Famille Perrin Chateauneuf-du-Pape “Les Sinards” which was made with three grape variants, namely Grenache, Mourvedre and Syrah, that carried notes of red fruit, chocolate and sweet spices.

Albert Wines and Spirits (M) Sdn Bhd digital development director David Stephan said the wine was made of grapes from the Rhone Valley in France.

“Due to the locations with big rocks from the alps, wine produced with grapes from that area tends to have more minerality.

“It comes with tame tannins and a mild fruitiness from the grapes, ” he said.

Cata presented the four-hands dinner at a two-day affair with Ng as the guest chef and Cata resident chef Terry Thum, who crafted two dishes each. The Paris-Brest (Revisited) was the perfect dessert to end the meal. It was paired with Calvados Boulard Grand Solage (Apple Brandy).

Both chefs are alumni of Le Cordon Bleu Malaysia. Ng was also the winner of the 2017 Jeunes Chefs Rotisseurs (World Young Commis Chef) in Frankfurt, Germany.

Diners started off the evening with Forest Mushroom Duxelle Tart and Crab Croquette.

The crunchy tart was filled with forest mushroom pate mixed with cubed shiitake mushroom to give it an earthy taste.

Meanwhile, the crab croquette was infused with shallots and red chillies to give the dish a hint of spiciness. The amuse bouche was paired with Gerard Bertrand Cote Des Roses that had floral notes of rose and hints of grapefruit.

Next was Provencal-style Red Snapper with Dubarry Mousse, charred leak and fondant potato, tomato sauce, Mozzarella and grilled vegetables. It was an interesting dish.

“We used a meaty fish for a change so that diners can taste the sweetness of the snapper.

“I seared the skin until it turned brownish before serving it with tomato sauce and cauliflower puree, ” Thum said. The sourish acidity of the tomato sauce, creamy cauliflower puree, fragrant charred leak and sweetness of the fish brought out a medley of flavours.

It was heavenly with the Pascal Jolivet Sancerre Blanc, which had a fresh tropical note and subtle sweetness but racy acidity.

The white wine was, in Stephan’s words, “the perfect Sauvignon Blanc.”

Ng’s Paris-Brest (Revisited) — a well-known dessert made of choux pastry and cream, with a twist — further cemented the traditions of French cuisine.

“It was previously consumed in cycling competitions from Paris to Brest where cyclists refuelled their energy with the sugary dessert.“Hence, I named it ‘revisited’ as a way to commemorate the dessert injected with a unique twist.

“The pastry is piped with hazelnut mousseline in between the pastry, giving it a nutty sweetness, ” she said.

Paired with Calvados Boulard Grand Solage (Apple Brandy), the alcohol that is usually enjoyed as an aperitif with tonic and ice had a strong oaky aroma with a distinctive taste of apples.

To celebrate the new year, diners can book a spot for Cata’s four-course New Year’s Eve menu starting from RM168 per person (depending on the main course) with optional wine pairing for an additional RM120 per person.