Banana trader and planter sees export opportunities for the fruit

There is demand: Foreign players are always looking for supply of good quality bananas, says Chow.

FEW would go bonkers over bananas like Datuk Tom Chow. He could talk about them all day.

However, his interest is not so much in the fruit itself but more in how much bananas could potentially generate for the country.

According to Chow, bananas are selling like hotcakes overseas.

“Demand is very high and it is very hard to buy bananas. So the price of bananas has been increasing every year. 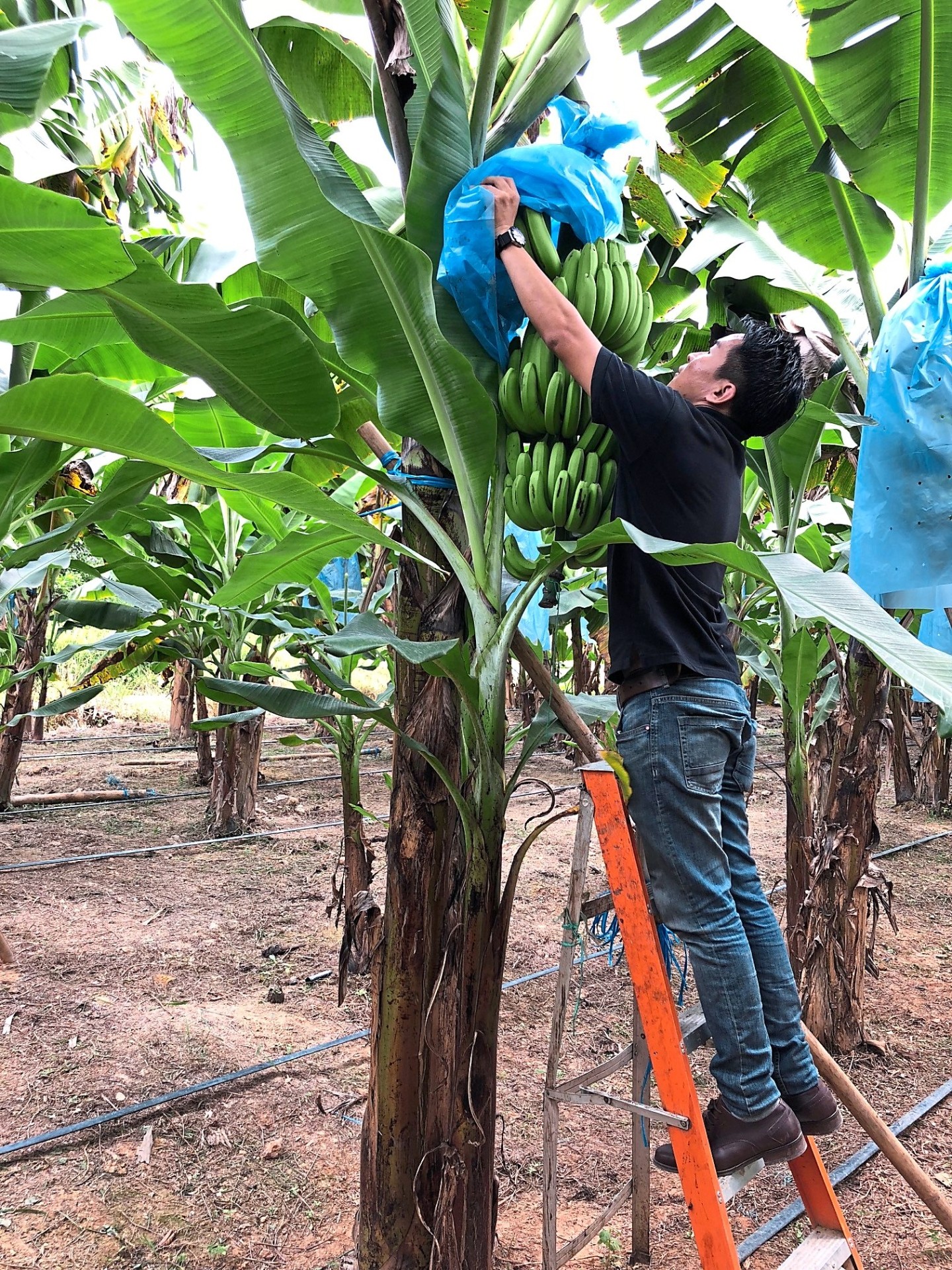 Higher yields: Agrofresh director Edmond Chow unveils a banana bunch at its R&D plantation in Puchong. The Cavendish variety can produce over 30kg of fruits in each cycle.

Chow first came to know about the banana frenzy more than 10 years ago when he worked for a company in China that was importing bananas, mainly from the Philippines.

Every week, Chow would buy around 200 containers of bananas for that company alone.

Obviously, there was a very big demand from China. But China wasn’t the only one. Places like Australia, the Middle East, Japan and even our neighbour, Singapore, were hungry for bananas.

Well, as far as Chow was concerned, Malaysia had an abundance of bananas. And there was no reason why we could not fulfill this demand.

So Chow packed up and told his employer that instead of working for him as a buyer, he’d rather form a trading company and sell him bananas.

All Chow had planned to do was to continue sourcing for bananas and to send them over to China. But he found that local bananas weren’t ripe for the picking for the international market and Malaysian bananas cannot be exported to China due to certain government agreements.

So he stuck to sourcing Cavendish bananas from the Philippines.

Until 2012, that is. Growing tensions over a land dispute between China and the Philippines then led to a halt in imports of bananas from the latter.

It was a dangerous time, Chow recalls. His bananas were stuck in containers and there was nothing he could do about it.

“I lost a lot of money, and we almost went bankrupt. And we were still a new business at that time so we had loans to pay back, ” says the managing director. 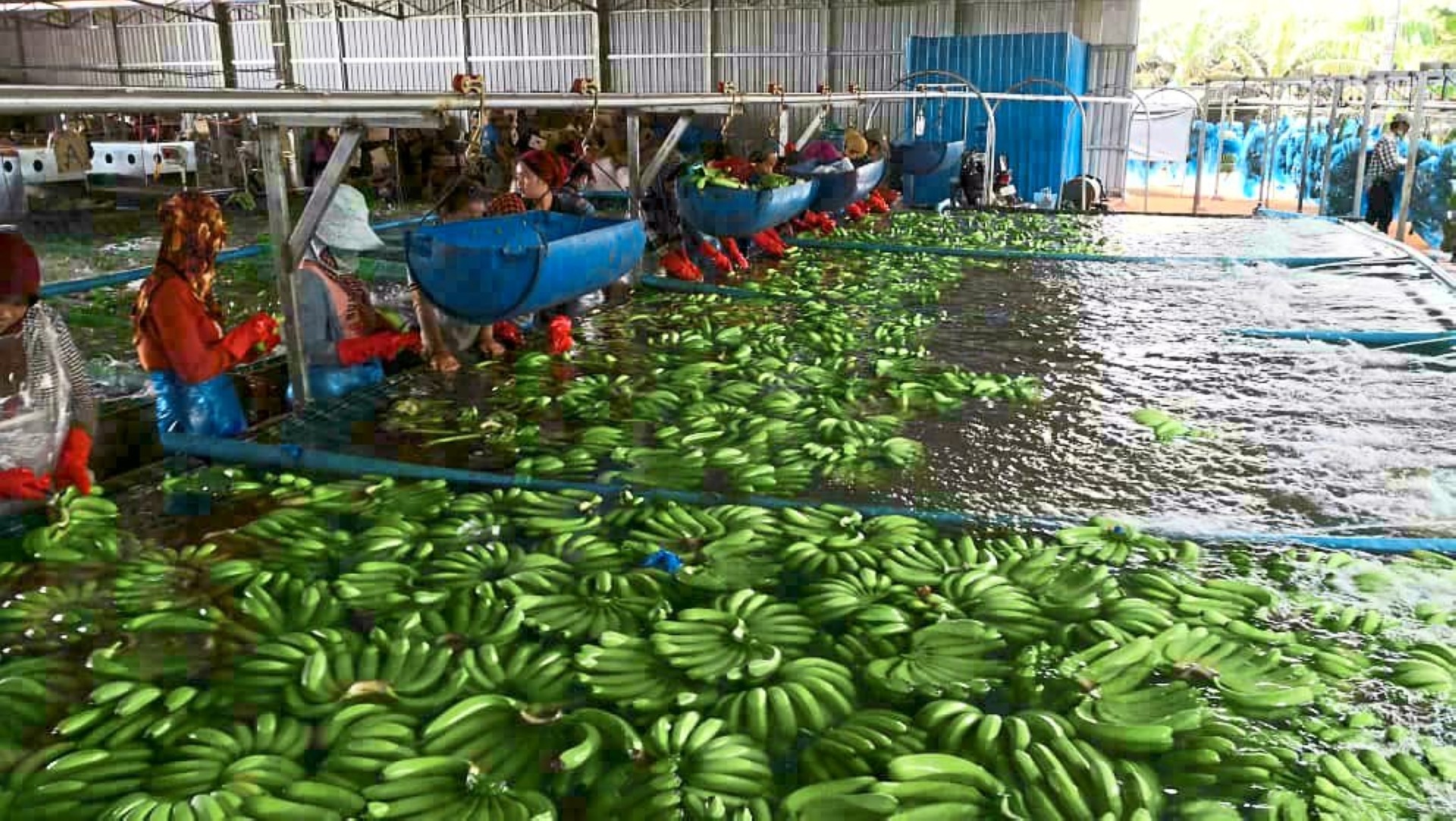 Better facilities: The company invested in state-of-the-art facilities and automated lines for its Cambodian venture.

Agrofresh was hit with about RM2mil in loses and its staff were left with nothing to do for almost a year.

One fine day, Chow received a call from a banana farmer in Indonesia, inviting him to come over to inspect his produce.

“The farm was quite big and the quality, not so bad. But he must upgrade his facility if he wanted to export. The farmer said he will change things. So I told him what he needed to change, how to plant for peak season and so on.

“Then I forgot about him, ” he shares.

Chow must have thanked his lucky stars that he went to Indonesia 10 years ago, because now that his supply from the Philippines had been cut off, this Indonesian farmer was heaven-sent.

“After 2012, this guy called me again. So I went. He really changed everything and followed my instructions, ” says Chow.

He quickly sent a container of the bananas to China. His counterparts there, just as excited to receive the fresh supply, approved of the quality -- they wanted more. 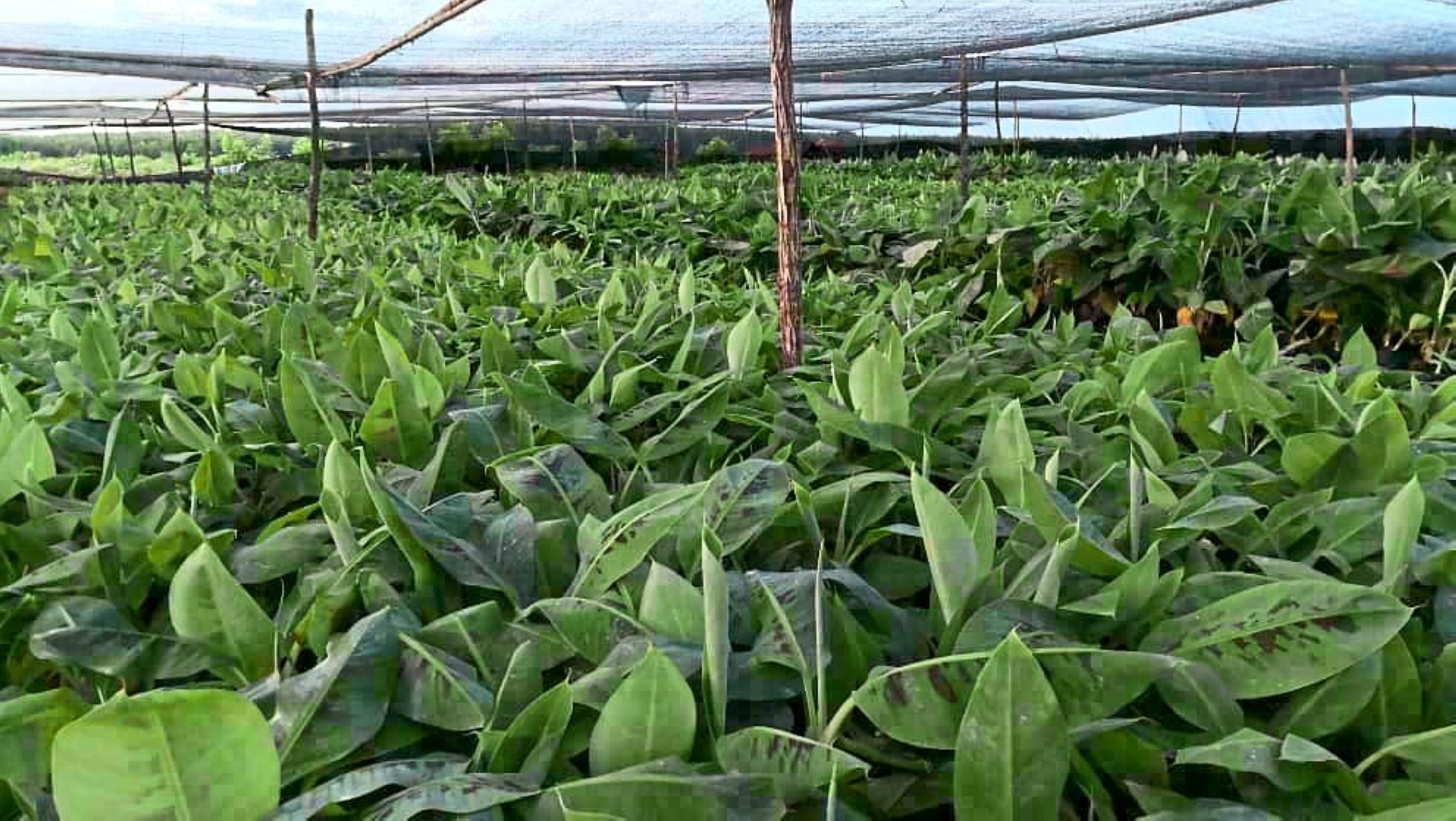 Follow market requirements: Chow says local farmers should consider planting varieties that are in demand in the export market.

But after two years, the Indonesian farm was bought over by investors from the Middle East and Chow was back to square one.

By then, Chow’s business partners in China were looking for opportunities to move into plantations to secure a more sustainable supply of bananas.

But Chow was no farmer.

“I have always dealt with plantations, but I’m not a planter. I’m a buyer, ” he says.

He knew what bananas fit for the international market looked like. Producing them was a different story.

So he reached out to University Putra Malaysia (UPM) in 2015. Agrofresh invested about RM5mil into a five-year tie-up with the university to produce export-worthy Cavendish bananas locally.

“We know how to do the quality control, handling of the product, packaging, export. But the plantation, tissue culture, planting, we don’t know. So we tied up with UPM to do the research and development (R&D).”

Nestled behind a row of shop lots, just past the bustling industrial area of Puchong, is a 5-acre plot of land where most of this R&D work takes place. Here, the banana trees are a prototype of sorts. They are planted according to specific criteria, using different types of fertiliser and such, to produce the best possible yield for export.

After four years, Chow thinks they’ve got the right formula. 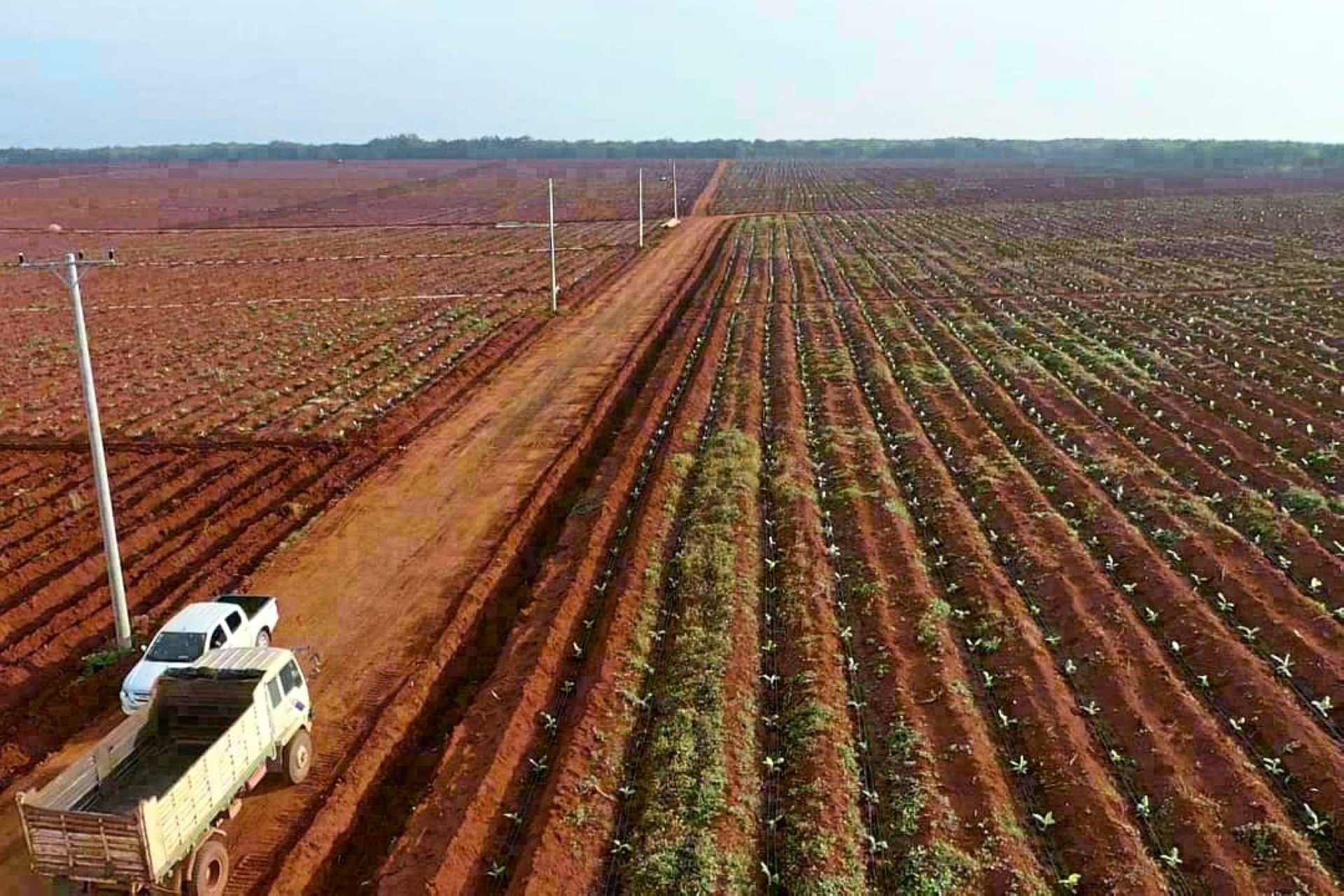 As far as the eye can see: The company has 3,000ha plantation land in Cambodia in partnership with its Chinese affiliates.

The techniques and technology that they’ve acquired over the years are now being applied at Agrofresh’s plantations in Vietnam and Cambodia.

Together with its Chinese partners, the company has about 600ha of plantation land in Vietnam and 3,000ha in Cambodia, all growing Cavendish bananas. But Chow notes that the bulk of these plantation lands have yet to be planted, giving the company plenty of room to scale up production in the future.

While its R&D work is mostly done in Malaysia, Chow says its plantation in Cambodia has better facilities with state-of-the-art cold room, packing facilities, good irrigation systems and automated lines.

At the moment, its Cambodia farm only exports about 1,200 containers a year to China.

One of the things that Chow hopes to do is to also apply the knowledge that the company has obtained from its years of experience to the local farming industry.

“Local universities already have the technology, but nobody is using it. You need R&D to protect the plants, ” he notes.

Through its tie-up with UPM, Agrofresh has compiled a manual on the standard processes that farmers need to follow in order to produce Cavendish bananas that would meet export standards.

Notably, getting local farmers to stick to the manual would be a challenge. After all, many of them have been planting bananas their own way for decades and growing the local varieties was more than enough to meet the demands of the local market. “It is hard to convince farmers to upgrade their farms.

“A lot of them are asking the government to help them with export but they don’t have the quality for export. If you want to export, you need to upgrade your facility. You need automated lines, proper cold rooms, systematic processes, you need to use fertilisers that are approved internationally. So Malaysia now needs to upgrade the quality of our farms and produce.

“And we need to follow what the export market wants. They want Cavendish bananas, ” he says.

Chow explains that the local varieties were not suitable for export as they have a shorter shelf life. Also, the Cavendish variety produces higher yields. A regular banana tree produces about 18kg-20kg each cycle; the Cavendish can go over 30kg.

He adds that these bananas are sold at a premium overseas – at about 2 dollars apiece in the local currency.

“There is high demand, but they require high quality. It is different from our local bananas.”

Chow hopes his ideas for local planters to plant according to the manual would take off as this will bring in more sales for farmers.

Additionally, Agrofresh has the networks and market access to export these bananas.

While Malaysia is still not able to export bananas commercially to China, there are still plenty of other markets waiting to lap up any available supply, he adds.

“If you plant good fruit, you don’t need to think of sales. There will definitely be a buyer. Last time, traders dictated the prices, but now, it’s a farmer’s market.

“And if you have a good farm, people will come and give you the deposit first to secure their supply. That’s how durian farms are like. There are buyers, but you need quality, ” he says.

However, he acknowledges that the upfront cost to start a farm can be high due to the cost of land in Malaysia. To have a good farm, the investment is estimated to be about RM40,000 per acre. Here is where he opines that the government could aid aspiring farmers with subsidies and incentives.

With its technology, Chow thinks it could persuade the younger generation to give agriculture a second look.

Agrofresh also recently acquired a 1,300acre land at the fringe of Selangor to start its own banana plantation in Malaysia. If all goes well, this could be the proper start of the company’s venture into plantations locally.