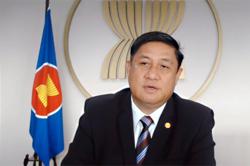 Coastal organic matter layers can be up to 6m deep compared with terrestrial soil organic matter that typically reaches up to 30cm in depth. Mangroves have thus emerged as the most absorptive ecosystem for lowering the amount of atmospheric carbon. (A lone visitors strolled along the pathway at a mangroves area at Mangroves Forest Education Centre in Sungai Acheh. - Filepic)

BLUE carbon is carbon dioxide (CO2) that is sequestered in coastal and marine ecosystems like mangroves, tidal marshes and seagrass meadows, which work as a single system to keep coastal zones healthy.

Coastal organic matter layers can be up to 6m deep compared with terrestrial soil organic matter that typically reaches up to 30cm in depth. Mangroves have thus emerged as the most absorptive ecosystem for lowering the amount of atmospheric carbon.

Thus, disturbing a hectare (ha) of mangroves releases as much emissions as cutting down three to five hectares of tropical forest.

In 2018, an international team headed by Dr Jonathan Sanderman at Woodwell Climate Research Centre found that 30 to 122 million tonnes of soil carbon were lost during 2000-2015 due to mangrove deforestation, three quarters of which were attributed to Indonesia, Malaysia and Myanmar.

Seagrass meadows also store carbon and the adjacent coral reef enhances that carbon sink capacity because it dissipates waves. The sheltering effect of coral reef improves sediment accumulation and lessens sediment erosion, which results in more carbon storage in the seagrass and in the sediment below.

Five of the top 11 mangrove-holding countries globally are in South-East Asia: Indonesia (2.71 million ha), Malaysia (0.56 million ha), the Philippines (0.26 million ha), Thailand (0.25 million ha) and Vietnam (0.22 million ha). As South-East Asian countries are heavily ecosystem dominated, they must put ecosystems in the centre-stage of their forward strategies, whereby preserving and restoring BCE have high priority in the climate mitigation hierarchy.

Coral reef, seagrass meadow and mangrove grow next to each other like neighbouring families. The Coral Triangle which covers the waters of Indonesia, Malaysia, the Philippines, Papua New Guinea, Timor Leste and Solomon Islands is home, refuge, school, supermarket, hospital, pharmacy and nursing home for nearly 600 different species of reef-building corals, six out of seven marine turtle species, over 2,000 species of reef fish and significant populations of tuna.

The Coral Triangle also protects the seagrass meadows and supports the livelihoods of over 120 million people living there.

Apart from being a carbon sink, seagrass meadows have critical roles in the food supply chain and habitat of marine creatures, which affect fisheries. These submerged flowering plants also stabilise the sea bottom and maintain water quality. These are examples of the myriad details of the totality of the ecosystem and the interactions that go on within it all the time.

Similarly, mangrove forests are highly interconnected within the ecosystem itself.

The movie, Life of Pi, shows a floating island of lush mangrove trees with dark green leaves and intricate roots coming to life, all moving as an integrated living being. Not only are these “roots of the sea” home, hunting, mating and nursery grounds for diverse wildlife and a rich nutrition source for life in the shallow oceans, but they also serve as important sources of food, lumber, and medicine for people in many nations.

Mangroves are also a transitional zone between land and ocean, connecting and supporting the two, preventing sediment erosion and protecting against hurricanes. They are important for human beings’ safety and wellbeing. Like the seagrass meadows, the colonisation of the mangrove communities benefits from neighbouring coral reefs acting as hydrodynamic barriers that dissipate wave energy and bring about a calmer environment.

Human beings are the custodians of life under water, but more than that, human beings are co-participants in the marine ecosystem, not separate from it.

Most of us pay attention to human existence, but what needs looking at is the totality of existence. Human beings need to learn to be reverent to the wholeness, and wholesomeness, of the entirety of it. People whose livelihoods depend on the river and sea live within the marine ecosystem, not only physically, but mentally and spiritually. They understand sustainability in a reverent and holistic way that “developed” people do not.

Indonesia, Malaysia and the Philippines have discussed blue carbon in their policies and have their national agencies develop blue carbon strategies. Flood mitigation, integrated river basin management, coastal erosion control as well as flood forecasting and warning projects requiring RM16bil worth of investment would be implemented under the 12th and 13th Malaysia Plans. It is prudent for the government to be prepared for all three aspects of a disaster, i.e. prevention, relief and reconstruction.

The severe floods in Malaysia in December 2021 are a warning of the future.

However, there are approximately 1,000 sq km of ungazetted mangroves that are solely under the state governments’ jurisdiction. Malaysia’s state governments control most regulations regarding land use and environmental protection, which covers managing forests and granting concessions for oil palm, timber and agricultural plantations.

Malaysia’s National Fisheries Act does not enforce the protection of mangroves even though fish and other marine lives are highly dependent on mangroves for survival. Seagrasses are totally unprotected by the aforementioned legal tools, except for the those growing in the marine parks, in which coral reefs constitute the main focus.

In March 2021, Indonesia embarked on one of the world’s biggest mangrove rehabilitation campaigns to restore 150,000ha annually across nine provinces up to 2024.

This carbon absorption programme is estimated to require 38 trillion rupiah (US$2.7bil or RM11.30bil) by its third year. The Peatland and Mangrove Restoration Agency and the Environment Ministry are designing regulation to diversify mangrove rehabilitation funding schemes.

One fundamental problem in marine ecosystem protection is that many state agencies have responsibilities protecting different parts of the ecosystem, eg mangroves, seagrass and coral reefs. The issue of how to get different government bodies to coordinate and work collectively is a common Asean challenge.

Sharing of experiences among Asean countries along the lines of “so how did you do that?”, followed by a shared creativity in developing the right institutional relationships in these complex networks, is necessary to get things right.

By working collaboratively, Indonesia, Malaysia and the Philippines can better address knowledge gaps, collect data, map and track changes in BCE, and enhance technical capacity in policy development and research on BCE.

The Eastern Tropical Pacific Marine Corridor is an example of countries with connecting maritime borders coming together to co-create a public policy.

Tension between development and conservation

Despite the awareness of the importance of mangroves rising in recent times, the pull to convert mangrove forest for aquaculture activities, plantations, land reclamation, property and infrastructure development persists. Big coastal development projects that badly damage a mangrove ecosystem will flip an awesome carbon sink into a carbon source.

Building a thriving township from wasteland wins admiration, but sacrificing a mangrove ecosystem for that purpose is not going to be appealing in a climate conscious era. When the bulldozers enter, ecological disaster happens and triggers the butterfly effect, which means small changes in initial conditions can lead to large-scale and unpredictable variation in the future state of a system.

An ecological disaster does not only affect the animals, birds and marine life, but also human beings. The brunt of it will not be borne by the foreign investors who purchase the properties as vacation homes, but by all the locals who call that land home; and this is not confined to the fishermen whose livelihood depends on a thriving marine ecosystem.

Policy makers and master developers must realise that mankind’s survival is at stake, and introduce policy incentives to change the investment mindset from more development-of-the-same to disaster prevention, i.e. resilience building. The concept of enough is key in the tussle between development and conservation.

Well-meaning people may propose replanting mangroves elsewhere by the amount removed at a biodiversity hotspot.

The rich biodiversity in the old growth mangrove forest is immediately lost and the newly planted mangrove trees will take long to develop the intricate root systems that safeguard lives.

Growing young mangrove trees also becomes difficult because there are fewer mature trees to shield the young seedlings from the strong waves that enter the mangrove forest during a rising tide. Like human communities, trees grow best in families whereby younger trees are guided and nurtured by older trees.

Pulling up a mangrove tree and planting it elsewhere probably releases more carbon into the atmosphere than it will re-absorb in a decade. When the whole development of a site is a vast expenditure of carbon footprint, society should rightfully be concerned and ask – for what value? A good exercise to help tell the truth would be to develop a carbon footprint “cost” of a supposedly “green” (greenwashed!) site.

Given the importance of mangroves and the whole ecosystem they are part of, corporations and universities interested in sustainability should rightly be proud of the mangroves on their doorstep and use them for researching and teaching about mangroves and the ecological complexity and carbon sequestration effectiveness of mangrove ecosystems.

Humanity has achieved much, and also destroyed much, by focusing on materialistic development.

Humanity now needs to scale the ladder of consciousness, on which destroying Mother Earth and then trying to save her is low consciousness investing. To properly develop land with rich biodiversity, governments can consider partners like The Eden Project to strengthen life and develop livelihoods that are symbiotic with ecosystems.

In this climate conscious age, a serious tension remains between the human focused desire to develop and the spiritually focused, insightful and deeper understanding that comes with acknowledging the totality of creation and our place within, not outside of, ecosystems.

They cannot be “balanced”. The wilfulness involved in desiring to develop everything in sight needs to be grown out of, and that is a maturation process not enough people seek to achieve.

Leong Yuen Yoong is professor at the Jeffrey Sachs Centre on Sustainable Development, Sunway University. Michael James Platts is with the Cambridge Institute for Sustainability Leadership, University of Cambridge. The views expressed here are the writers’ own.