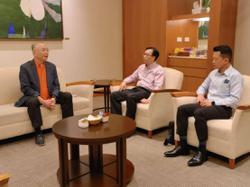 SRS Consortium, which is the project delivery partner of the Penang south reclamation project, managed to source RM1.3bil to kick start project. - The Star is aiming to start the first reclamation works for the massive Penang South Island (PSI) project as early as next month after it received the green light from the state government.

“The first phase of the PSI project would involve the reclamation of 1,200 acres of land spanning over five years with an estimated cost of RM6bil to RM7bil, including road and bridge development, ” he said yesterday.

“The reclamation project will add RM5bil to Gamuda’s order book over the next five years, ” he added. At the moment, Gamuda has an order book of RM5.5bil.

Mohammed Rashdan said the PSI project is a game-changer for Penang to attract both local and global companies to cater to the technology industry with the master plan and design concepts that include the ESG or environmental, social and corporate governance principles. Under the PSI project, a total of 700 acres of land has been allocated for Green Tech Park, targeted at high-value E&E players on Island A that would complement the industrial ecosystem of Bayan Lepas.

“The Island A will be like Bayan Lepas 2.0, but it will be an ESG-centric development emphasising on green and sustainable elements, ” Mohammed Rashdan said.

The PSI project consists of three islands located at the south of Penang Island, which is next to the Bayan Lepas airport.

Yesterday, Gamuda announced that its 60%-owned subsidiary SRS Consortium Sdn Bhd, which is the project delivery partner (PDP) for the Penang Transportation Master Plan (PTMP), will undertake the development of the first Island in PSI, known as “Island A”.

In a filing with Bursa Malaysia, Gamuda said the Penang state government had accepted the terms of project development of Island A on March 25.

The project will be implemented via a project development model through a joint venture (JV) with the Penang state government.

The project cost will be fully funded by the consortium through internally generated funds and bank borrowings.

According to Gamuda, a project development company will be formed on a JV basis between the entity nominated by the Penang state government (PSG nominee) and a special purpose vehicle to be set up by SRS (SRS PD), on the basis of 30:70 respectively.

Under the agreement, the PSG Nominee shall have no liability to fund the Project Developer.

In addition, SRS PD shall ensure that the PSG Nominee shall have no obligation or liability to provide any collateral for the borrowings of the project developer.

The works shall be awarded to a turnkey contractor, in which the PSG nominee and another special purpose vehicle to be set up by SRS (SRS TC) would have a 30% and 70% stake, respectively.

Meanwhile, all other components comprised in the Master Agreement shall remain under the PDP model.

Overall, the PSI project would see the creation of three islands involving islands A, B and C with a total area of 4,200 acres at the southern tip of Penang Island, as well as the construction of the light rail transit and Pan Island link highway under the PTMP project.

Island A will have a total size of 2,300 acres, which will take about 10 years to be reclaimed.

In line with the highest global ESG standards, the Masterplan Design sets aside 20% or 450 acres of the entire 2,300 acres for public open spaces and parks, public beaches and esplanades.

Using the Marina Bay in Singapore project as an example, Mohammed Rashdan expects that the PSI would turn into a similar outcome but emphasising industries such as technology, semiconductor and artificial intelligence (AI).

“We have already received enquiries from property developers to semiconductor companies for the land on Island A. When the time comes, we will conduct it through an open tender, ” he said.

Gamuda’s partners in SRS are Loh Phoy Yen Holdings Sdn Bhd and Ideal Property Development Sdn Bhd, with each holding 20% in the consortium. 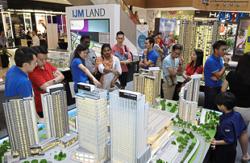 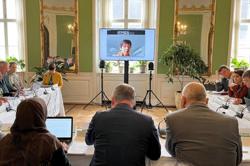