5G is here to stay

IT has been eight years since the fourth generation (4G) network services were launched in Malaysia.

Over that period, all states received the high-speed Internet connectivity, with 91.8% of the population currently having access to 4G services in populated areas.

Or at least, that is what the official statistics say.

While telecommunication companies (telcos) say they have consistently expanded their infrastructure for an improved 4G experience, Malaysians have continued to complain about poor connectivity and speed, even in major cities.

Reports of such are aplenty. From a consumer in Putrajaya who claims she faces unstable 4G connectivity to even Umno secretary-general and Pontian MP Datuk Seri Ahmad Maslan, who tweeted late last year that the telecommunication towers in his constituency only supports 3G and not 4G. Under the SPV model, operators will only incur one-third of the costs as they pay through the wholesale charges. As a result,the end-users such as individuals and businesses can enjoy lower prices for 5G services and get early access to 5G." - Ralph Marshall

There are views that telcos have not done much to rollout 4G infrastructure nationwide, despite the fact that the 4G spectrum was allocated to the operators at minimal charges, unlike in most countries where such spectrum were auctioned by governments at high prices.

An industry veteran says that the 4G spectrum has been “underutilised” due to inadequate capital expenditure by the telcos.

This, in turn, has not effectively narrowed the digital divide in Malaysia, particularly between the urban and rural areas.

“Telcos in Malaysia enjoy one of the highest margins compared to their peers in the world.

“On average, the Big Three telcos namely Digi, Axiata (which owns Celcom) and Maxis have recorded earnings before interest, tax, depreciation and amortisation (Ebitda) margin of above 40% in the past years.

“If you compare that to the telcos in Europe, yes the European telcos also enjoy double-digit Ebitda margins, but certainly not as high as the Malaysian telcos, ” according to the industry observer.

He further adds that despite the high profit margins, telcos in Malaysia have not invested adequately to expand their 4G infrastructure. 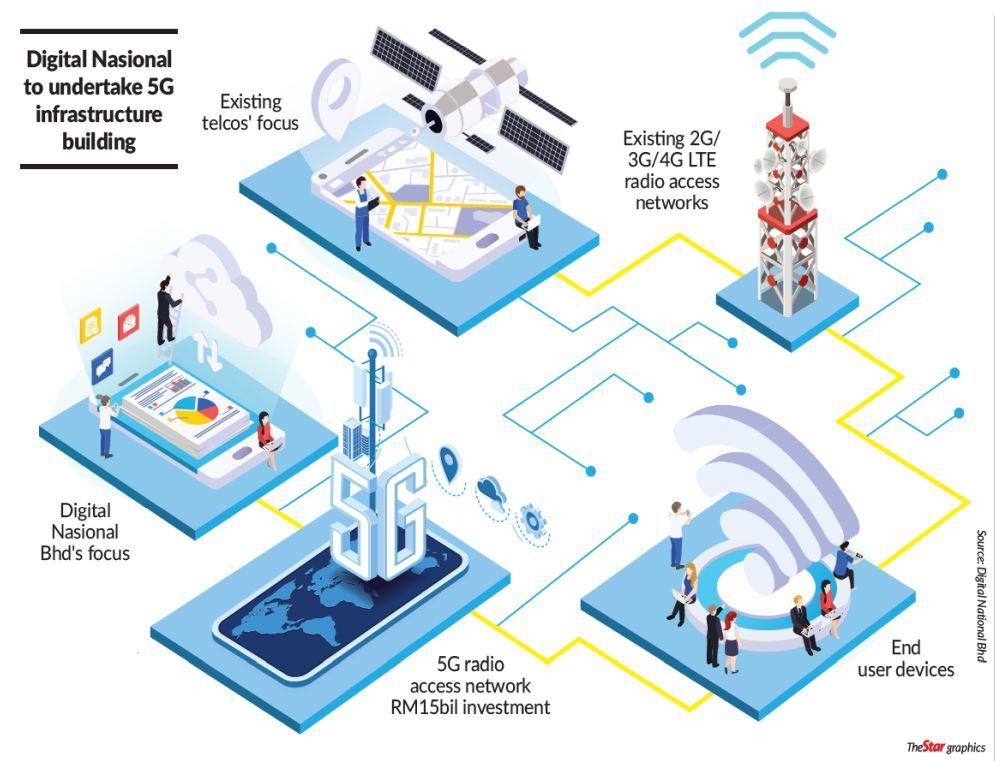 “The government’s intention to award 4G spectrum with just minimal upfront charges, and not through an auction, was to enable the telcos to invest adequately in their infrastructure and to provide Internet services at affordable prices. But clearly, that has not been the case, ” he says.

As the world ushers in the new era of Internet through the adoption of 5G, the government realises the pressing need to step up the efforts to improve domestic Internet accessibility.

Hence, a new model - which could potentially be the first in the world - has been adopted to roll out 5G.

The government, via a wholly-owned special-purpose vehicle (SPV), will build, own and implement the 5G infrastructure and spectrum.

Telcos, on the other hand, would have access to the infrastructure and spectrum through a wholesale pricing mechanism. This would essentially make the 5G spectrum a “shared commodity”, instead of individually owned as in the previous generations of mobile networks.

The 5G SPV, or Digital Nasional Bhd to be exact, will invest about RM15bil over a period of 10 years to roll out 5G, beginning from end-2021.

Previously under the Pakatan Harapan administration, the plan was to allocate 5G spectrum to a consortium owned by the country’s operators. The 5G rollout under the model would be primarily private sector-driven.

“The shared infrastructure model will enable Malaysia’s leading operators to catch up with global leaders across multiple customer experience metrics, ” he says in his first exclusive interview since being appointed as Digital Nasional’s chief. Touted as tycoon Ananda Krishnan’s right-hand man, it is notable that Marshall had played a key role in the rollout of the Maxis and Astro

He will lead a group of professionals in Digital Nasional to undertake one of Malaysia’s grand projects in this decade.

Digital Nasional will be overseen by a four-member board of directors, led by Treasury secretary-general Datuk Asri Hamidon as the chairman.

With the SPV being a government-owned entity, critics have raised concerns about potential corruption and bureaucracy issues that may adversely affect the 5G rollout.

Fitch Solutions, the research arm of Fitch Group, also warned that the SPV model would likely be costlier to implement as it would be centrally-coordinated.

“Elevated costs associated with a single-entity rollout would likely be passed on to operators in the form of higher wholesale costs, and in turn, operators would find it difficult to extract higher margins from selling these services to their customers. “Lower profits would also mean less funds for operators to invest into service development, weakening the ability of the operators to differentiate themselves from their rivals, ” it says in an earlier report.

Marshall, however, points out that shared 5G infrastructure significantly reduces the costs to be borne by the telco operators.

“Under the SPV model, operators will only incur one-third of the costs as they pay through the wholesale charges.

“As a result, the end-users such as individuals and businesses can enjoy lower prices for 5G services and get early access to 5G.

Marshall acknowledges that the wholesale fee charged on operators would include a profit margin for Digital Nasional.

“But we have to price it (wholesale price) such that the telcos can price it back to their customers at a fair price.

“The SPV model also enables telco operators to focus on strengthening 4G coverage, migrate 3G subscribers to 4G and improve customer experience as the burden of building the 5G infrastructure has shifted to the government.

“We would also be able to bridge the urban-rural digital divide, ” according to him.

It is noteworthy that one of the government’s top priorities under the National Digital Infrastructure Plan (Jendela) is to increase 4G population coverage from 91.8% currently to 96.9%.

Marshall also points out that only existing licensed telco operators would be allowed to access the 5G infrastructure built by Digital Nasional.

No more delays in rollout

Marshall argues that there is an urgency to accelerate the 5G deployment in order to increase Malaysia’s competitiveness.

Countries across the world have been working towards creating a 5G-enabled environment, which is a key factor in growing local businesses and attracting foreign investors.

The adoption of 5G will also mark the beginning of a more advanced and extensive digital economy in Malaysia, according to him.

“The government’s obligation is to make sure they create sufficient opportunities for wealth creation and income generation such that people can pay for these (5G) services, ” he says.

He adds further that a good nationwide 5G accessibility at affordable prices would create employment opportunities, especially high-skilled jobs that would drive businesses and revenue generation.

Clarifying on the estimated RM15bil price tag for the 5G rollout, Marshall says it is inclusive of operations and maintenance costs as well as capital expenditure or cost of equipment over a 10-year period.

On average, he expects the O&M costs to “roughly be about RM600mil to RM800mil a year”, depending on how intensive the rollout would be in a particular year.

“We will have a more accurate cost when we receive submissions from the various network and infrastructure providers invited to participate in the open tender process which will commence shortly.

“Digital Nasional will evaluate innovative options to achieve a cost-effective financing structure applicable to infrastructure projects of this nature.

“Our expectation is that it will be privately funded through a Private-Public Partnership arrangement, ” he says.

Marshall also says that Digital Nasional will likely front load the investments, possibly investing 25% of the RM15bil in the first two years.

“Following that, about 15% to 20% will be spent in the next few years and the percentage will gradually drop in the following years.

“This is because once you complete building the infrastructure in the urban areas, then it becomes less intense (to rollout).

“The focus is to achieve a fast rollout and making sure we don’t compromise on 5G connectivity nationwide, ” he says.

Marshall assures that Digital Nasional will be run by professionals, efficiently and transparently.

The tender process for the 5G infrastructure building will take into account the needs and requirements of the telcos, he said.

“There’s no reason to expect that just because the SPV is government-owned, it is going to be a mess, expensive or badly implemented.

“You have to give the government the opportunity to deliver on the MyDigital initiative, ” he says.