In a filing with Bursa Malaysia, PLS said it has proposed to place out 19 million new shares to Nazir at 95 sen per share as part of its private placement exercise.

PLS said the proposed placement would enable the company to have Nazir onboard as a strategic investor.

PLS is planning a private placement that would entail the issuance of up to 52.61 million new PLS shares representing up to 10% of the total number of issued PLS shares.The group said Nazir’s stake in PLS would represent 5.23% and 3.6% depending on the total number of issued shares of the company under the minimum/maximum scenario for its private placement.

Based on the subscription price and the illustrative issue price of 95 sen per share, PLS will raise gross proceeds of up to approximately RM34.5mil (based on minimum scenario) and RM49.97mil (maximum scenario, if the 162.85 million warrants are exercised).

PLS said the private placement, which includes share placements to other independent third-party investors, will also enable the company to raise funds to partially repay the group’s bank borrowings which stood at RM121.48mil as at Dec 31,2020.

“The proceeds raised from the proposed placement will primarily be used to set up a durian business hub and to expand its existing durian plantation businesses through the cultivation and planting of more durians at the group’s existing plantation land and at other third parties’ land, ” it said.

The exercise is also to address the group’s public spread requirement, which is below the 25% threshold of its total listed shares are in the hands of public shareholders.

It is worth noting that Ekovest Bhd

PLS Plantations has been a loss-making company for several years and in its latest results for the first quarter ended June 2020, the group posted a 139% year-on-year (y-o-y) jump in net profit to RM2.19mil, which it attributed to the increase in both the sales volume and average selling prices of palm oil fresh fruit bunches, sale of frozen durian products to overseas customers, especially in China, and the sale of fresh whole durians.PLS said that barring any unforeseen circumstances and subject to approvals of relevant authorities being obtained, the proposed share placement is expected to be completed in the first quarter of this year.

Yesterday, shares in PLS closed higher by four sen or 4.3% to 98 sen per share. 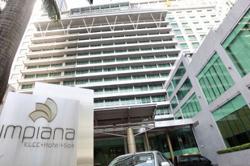