IN a bid to end the United Nation’s Security Council stranglehold over the selection of the Secretary-General in 2016/2017, the battle cry by a group of prominent reformists at that juncture was non-other than “more of a General, less of Secretary”.

Such is the parochial and deep-seated connotation relating to the nomenclature, “Secretary” – a vocation that is deemed to be administrative and clerical in nature. A “General” is conversely regarded as a position in which there is strong command and leadership with the responsibility of managing power dynamics.

On the company secretarial front, there has been a strong, close to two decades-long of global movement to redefine and bring about an empowerment in the role of a company secretary.

For example, the United Kingdom’s Institute of Chartered Secretaries and Administrators has been rebranded to Chartered Governance Institute to reflect the increasingly advisory role assumed by a company secretary.

Such an advocacy is also evident in Malaysia with The Malaysian Institute of Chartered Secretaries and Administrators (Maicsa) introducing the second designation, Chartered Governance Professional for its members in addition to the existing designation of chartered secretary.

It goes without saying that the bolstering of a company secretary’s role transcends beyond the façade of nomenclature and professional posturing. To this end, it is heartening to witness the growing corporate governance leadership actions exemplified by company secretaries.

In the domestic sphere, we have read of company secretaries undertaking to “bell the cat” with a view of advising boards on red flags.

Fairly recently, we have seen an instance where the company secretary of a government-linked investment company astutely and valiantly pointed out the statutory and constitutional limitation to appoint an active politician as chairman of the board.

Clearly, the resolve of the company secretary in acting as a corporate governance leader will be tested by the Covid-19 pandemic, which has brought about unprecedented changes in the corporate environment and inner workings of board-management.

While much has been written about how boards can augment management capacity during the pandemic and after, discourses on the esoteric workings of company secretaries in such a situation have largely been under the radar.

> Surfacing timely prompts to and from the board

As management personnel are inundated with the task of operational “heavy lifting” to weather uncertainties brought about by the pandemic, boards clearly risk being a drag if they constantly press management teams for streams of formalised reports and presentation packs on updates regarding the company’s affairs.

On the other hand, management simultaneously runs the risk of losing out the enriched advice and outside perspective from boards in the event directors are not apprised of material company developments. In managing this trade-off, company secretaries can play a key bridging role by proactively “crowdsourcing” input from management through alternative means and where practicable, transforming such information into intelligence and insights for board members.

In completing the loop, company secretaries can then relay the prompts by boards to the management team for consideration and action. The use of board portals or web-based workspace would go a long way in this regard.

From a regulatory standpoint, there has been a recent swathe of corporate governance changes including temporary measures being meted out as regulators recognise the immense uncertainties arising from the pandemic and the inherent unpredictability in the market. It is thus incumbent on company secretaries to download these matters to board members and advise them if their actions are in line with the regulatory expectations.

Such downloads from company secretaries should be buttressed with suggestions on how boardroom configuration and governance arrangements can be recalibrated with the changing regulatory expectations as well as market developments.

For instance, in the current challenging climate, we are witnessing governance shifts such as the increased formation of hybrid board-management committees for dedicated oversight on selected areas (for example, business continuity, digital transformation), adjustments in the remuneration composition of directors and senior management as well as heightened focus on organisational development in the board agenda or ”buffet menu” of boards.

As company secretaries are catapulted to take centre-stage in line with their leadership role, an augmentation of internal administration responsibilities with outward-focus is imperative. Alongside the investor relations and corporate communications team, company secretaries can assist boards and top management in framing the crisis and post-crisis communiqué to key stakeholders.

Due cognisance should be accorded to the governance measures surrounding the conduct of virtual or hybrid general meetings with a view of assisting shareholders to acclimate to this newfound setting.

It is worth mentioning that guided by their company secretaries, several progressive listed issuers have instituted measures to enable independent streaming of questions raised by shareholders during virtual or hybrid general meetings. Such a move will serve to allay concerns by shareholders that questions posited in a technology-based platform are being “cherry-picked” or “sugarcoated”.

In summary, as company secretaries shift into the advisory and leadership space, the corporate ecosystem will benefit from their facilitation, responsiveness and informed judgment. This positive spillover can only be sustained with the continuous agility of company secretaries in line with market developments, particularly amid the current “perfect storm”.

To borrow a quote from current UN Secretary-General António Guterres, “we need to be nimble, efficient, and effective; we must focus more on delivery and less on process, more on people and less on bureaucracy”. 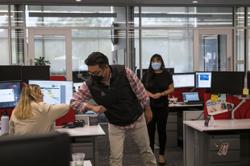