With Maybank IB Research’s latest call upgrade, a total of 13 out of 18 analysts recommended a “buy” on KPJ, according to Bloomberg data.

PETALING JAYA: Maybank IB Research is the second research house over the last five months to upgrade its recommendation on KPJ Healthcare Bhd

to “buy”, as it believes the stock’s selling is overdone and new value is expected to emerge.

It also said that KPJ, Malaysia’s largest private hospital operator by number of hospitals, would be unfazed by the government’s imminent drug price control measures.

With Maybank IB Research’s latest call upgrade, a total of 13 out of 18 analysts recommended a “buy” on KPJ, according to Bloomberg data.

Meanwhile, four analysts have “hold” calls and one recommended “sell”.

Recall that AmInvestment Bank Research upgraded its recommendation on KPJ earlier in June this year.

“However, we believe KPJ should be able to raise other charges to mitigate for potential lower drug revenue, ” stated Maybank IB Research in a note.

Over the last 10 months, KPJ’s share price has underperformed the benchmark FBM KLCI and Bursa Malaysia Healthcare Index, which have declined by 5.48% and 4.59%, respectively.

For context, KPJ stock has remained on a general downtrend since August 2018.

Yesterday, the counter closed half a sen lower at 92 sen, with about 5.34 million shares done.

Maybank IB Research has also increased its earnings per share target for the financial years of 2019 to 2021 by 7%, 8% and 6%, respectively.

The upward earnings revision was made to reflect KPJ’s outperformance in the first half of 2019 and the expectation that the volume growth will sustain into 2020-2021, given the spillover of patients from public sector and growing medical tourism.

“3Q19 results is scheduled to be released on Nov 28 or 29 and we expect its core net profit to be stronger quarter-on-quarter or year-on-year. Traditionally, earnings are back-loaded with second-half stronger than the first half, in the absence of major festivities.

On Health Ministry’s plans to shift some of its outpatients to the private hospitals to alleviate congestion at public hospitals, the research house said KPJ would still benefit although margins for this business could be lower.

This is because KPJ’s outpatient volume, which currently contributes 25% of the group’s total revenue, will increase and lead to higher utilisation of KPJ’s equipment during off-peak hours.

“We think this shifting could be implemented in 2020-2021, as it is not overly-complicated to work out the referral or pricing framework, ” Maybank IB Research said. 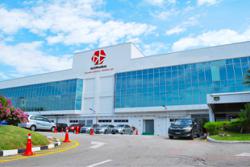