Separately, Tan revealed that Berjaya Group was close to concluding a deal to sell its Four Seasons Hotel and Hotel Residences Kyoto (Four Seasons Kyoto) in Japan for a profit of between US$350mil and US$400mil.

The tycoon has also set in motion plans to list his mobile telecommunications service provider U Mobile Sdn Bhd on Bursa Malaysia and the hotel business of BLand under a new name on the Singapore Exchange (SGX) next year.

Separately, Tan revealed that Berjaya Group was close to concluding a deal to sell its Four Seasons Hotel and Hotel Residences Kyoto (Four Seasons Kyoto) in Japan for a profit of between US$350mil and US$400mil.

Speaking at a press conference here yesterday, Tan cited the consistent undervaluation of 7-Eleven and BLand as one of the primary reasons for taking the companies private.

“7-Eleven is very undervalued,” Tan said, pointing to the company’s market capitalisation compared with that of the 7-Eleven convenience store operator in Thailand, CP All PCL.

Tan said his group had engaged several banks to explore the options for 7-Eleven.

“We’re thinking about it (taking the company private). BCorp is considering it, and we’re studying the plan that could trigger a general offer from BCorp (for 7-Eleven),” he said.

Meanwhile, Tan also revealed that his group had received at least three offers from foreign parties to buy 7-Eleven but the high price tag had deterred them from pursuing the matter.

“Many foreign parties are interested to buy 7-Eleven but they say the price I’m asking is too high. I think the business is worth US$1bil,” he said.

As for BLand, Tan said, besides being significantly undervalued by the market, the company’s shares were hardly ever traded.

On top of that, he said BLand had issues in complying with Bursa Malaysia’s listing requirement of having at least 25% public shareholding spread.

Hence, it would make sense to delist BLand from the local stock exchange.

“We will delist BLand because BLand is so undervalued, and also not many people buy its shares, so by delisting, maybe it will help the existing minority shareholders to get a better deal,” Tan said, adding that the Berjaya group owns about 80% of BLand.

BLand was last traded at 18 sen per share, giving it a market cap of about RM900mil.

According to Tan, the proposed delisting of BLand would take place after the listing of his hotel business on Singapore’s stock exchange.

“We plan to list our hotel business on SGX, instead of listing it in Malaysia because under the current rule we cannot list it here. The hotels are owned by BLand, so that will go against the chain listing requirement,” Tan said, adding that the listing on SGX would likely involve five or six hotels owned by BLand.

According to Tan, the valuation of the hotels had yet to be finalised, but the planned initial public offering (IPO) would see the group releasing 25% shareholding of the business to meet the minimum public spread requirements of SGX.

He said proceeds raised from the proposed IPO of the hotels would be ploughed back into the business for working capital.

Separately, Tan revealed that he was working on a plan to float U Mobile on Bursa Malaysia.

On U Mobile’s prospects, Tan said the company was doing well, as its customer base had expanded significantly, and the group had turned profitable operationally.

As for the proposed divestment of Four Seasons Kyoto, Tan expected to conclude a deal in the next 60 days.

“We are talking to a few parties. They are interested to buy Kyoto Four Seasons because it is good brand and it is at a strategic location. We hope to conclude the sale in the next 60 days, but nothing has firmed up yet,” he said.

Tan said he would expect to make a gain on disposal of around US$350mil to US$400mil from the deal. The gains would be distributed to shareholders.

“I have said this before, everything is up for sale, as long as the price is right,” Tan said, adding that the group is currently working with the Four Seasons group on another project in Okinawa, Japan.

Meanwhile, Tan revealed that as part of the regularisation plan for Berjaya Media Bhd

(BMedia), he would identify one of his privately-owned business that is profitable to be injected to BMedia, which slipped into the Practice Note 17 status in last June.

Citing the challenging operating environment of the newspaper publishing business, Tan said the core business of BMedia would eventually change.

The name of the company, which is the publisher of The Sun daily, would probably be changed too, he added. 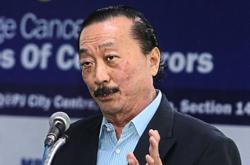