THERE are a select few companies which have grown their valuation to surpass RM10bil. Here we highlight the journey of those who have grown into that size over a four-year period as well as those which have dropped out of that benchmark in that time.

Also highlighted are four companies likely to grow into the RM10bil club in the next four years.

New entrants into the RM10bil club

The “RM10bil market capitalisation” club remains exclusive to a handful of public-listed companies on Bursa Malaysia.

Among them are Malayan Banking Bhd

, spanning across various sectors such as finance, telecommunications and others.

Over time, very few companies have crossed the RM10bil-mark. In the same time, those already on the list have also seen their market capitalisation grow.

To put it into perspective, earlier in June, Maybank became the first company listed on the bourse to breach the RM100bil market capitalisation level.

Data compiled by StarBizWeek shows that there are 42 listed entities on the Malaysian bourse currently, which are part of the exclusive RM10bil club.

This represents only less than 5% of the total 921 companies listed on both the Main Market and Ace Market.

These companies have grown over the years, driven by strong fundamentals and stellar management.

Of course, these listed entities were also subjected to market volatility and myriad unforeseen circumstances, similar to other companies on the bourse.

However, it was due to persistent efforts and savvy management that these companies have continued to strengthen their footprint in the RM10bil club.

As greater liquidity flows into the domestic capital market, the list will only grow bigger. It is worth noting that more companies are slowly striding towards the RM10bil-mark.

They include the likes of Top Glove Corp Bhd

Over the last four years, four more large-cap companies have joined the league, as elaborated below: 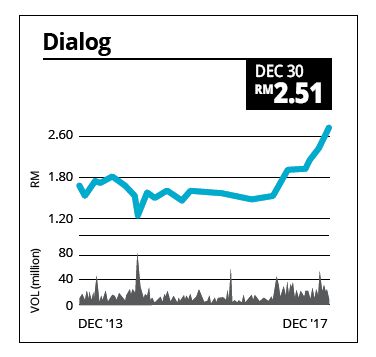 Dialog Group Bhd is one of the rare few that survived the debilitating plunge of the global oil price. Despite the challenging market conditions, the group has continued to record resilient earnings and share price growth over the years.

Just as when many other oil and gas (O&G) companies are struggling to survive in the sluggish crude oil price environment, Dialog’s bottom line has grown at a compound annual growth rate of almost 20% since 2014.

Contrary to many O&G service providers in Malaysia which serve primarily in the upstream segment, Dialog’s businesses span across upstream, midstream and downstream sectors.

The company continues to strengthen its footprint in the midstream and downstream segments, especially with its Pengerang Deepwater Terminal (PDT) which is located just next to Petronas’ Refinery and Petrochemical Integrated Development project.

With the development of PDT, the engineering, procurement, construction and commissioning activities continue to be the main drivers of Dialog’s earnings.

Apart from that, the group also aims to penetrate further into the tank terminal business. In September, Dialog took full control of its tank farm and terminal facilities in Tanjung Langsat, Johor, via the acquisition of the remaining 45% stake in Centralised Terminals Sdn Bhd from MISC Bhd

These strategies work well to buttress Dialog’s performance regardless of the oil price volatility in the upstream segment. PDT, which is currently undergoing capacity expansion, is expected to anchor the group’s long-term earnings growth.

Now, as crude oil price is gradually recovering, Dialog seems to be well on track to benefit from the O&G sector’s upturn.

Eleven research houses have “buy” calls on the stock, while five others recommend “hold”. The year 2017 has been extremely positive for South-East Asia’s largest aluminium smelter.

China’s move to impose restrictions on industrial output turned out to be a boon for Press Metal, as aluminium prices rose to multi-year highs.

Currently, the three-month aluminium spot contract on the London Metal Exchange is hovering at US$2,241 per tonne, a six-year high.

Given the strengthening of aluminium prices, Press Metal registered a 24.5% higher net profit at RM425.6mil on a year-on-year basis in its first nine months of FY17.

Its smelting operation has continued to run at full capacity and the trend is likely to prolong, driven by the strong demand from its buyers.

The group’s three smelting plants – in Mukah and Samalaju Phases 1 and 2 – cumulatively has a smelting capacity of 760,000 tonnes per annum.

Share price-wise, Press Metal is one of the best performing large-cap stocks in 2017, hitting a record high this year.

Over the last 12 months, the counter has surged by nearly 236% to RM5.37, bringing its market capitalisation to RM20.58bil currently.

The Main Market-listed aluminium extrusion firm has also been included in the MSCI Malaysia Index and the benchmark FBM KLCI in the past two months.

Currently, two research houses have “buy” calls and two others have “hold” on Press Metal.

Underpinned by the group’s promising prospects, RHB Research has upgraded its earnings estimates by 13% to 33% for the financial years 2018 and 2019.

Moving forward, Press Metal could register significant logistics cost reductions following the commissioning of the Samalaju Port in Sarawak, which is next to its smelting plant.

In its published note, RHB Research says Press Metal is expected to cut inland logistics and shipping costs, given its proximity to the Samalaju Port.

“Increased value-added production may also help to enhance the group’s profitability,” it says.

Overall, with the continued increase in global aluminium prices and prolonged weakness of the ringgit, Press Metal is likely to witness yet another bullish year ahead. 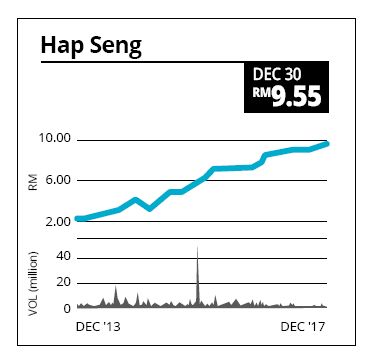 At the end of the day, consistent and good financial results and credibility speaks the loudest.

That is exactly what Hap Seng Consolidated Bhd has been achieving over the past four years – actually way before that. Not surprisingly, over a four-year period, it has been achieving double-digit returns on equity (ROE). For its financial year ended Dec 31, 2016 (FY16), it achieved ROE of 18.23%.

Earnings wise, Hap Seng recorded RM588.26mil in FY13, and as of FY16, this has almost doubled to a stunning RM1bil. Against its revenue of RM4.89bil in FY16, this is a profit margin of 20%. Fancy that for a company with a market capitalisation of RM23.95bil.

Also, the company regularly rewards shareholders with dividends, as it has a policy of paying out not less than 50% of profit after tax. Hence over a five-year period, dividends have been growing at a rate of 30.63%.

It helps too that in 2016, Hap Seng was added to the FBM KLCI main index which tracks the performances of the 30 largest companies.

Currently, the group’s businesses are largely in Malaysia which accounted for 82.3% of its total revenue in FY16.

However, the group is growing its presence in Asia – particularly in Singapore, Indonesia and China – through the fertilisers trading and building materials businesses.

So how did it manage to consistently deliver strong profits? It is back to basics, really – it simply focuses on its core businesses where it has built its core competencies and strong market presence over the years.

Nonetheless, Hap Seng is always on the lookout for potential acquisitions of new assets or opportunities for strategic alliances with other similar businesses.

More importantly, it embraces good practices in all of its segments – as cheesy as this may sound, this is how it has successfully build a prominent market presence and strengthens customer relationships. Customers trust Hap Seng.

Thirdly, it is prudent – it always focuses on improvements in operational efficiency and cost-savings initiatives to enhance the profitability and marketability of its products and services. Trailblazing was its theme for 2017. And rightly so too. From a relative nothing glovemaker less than 20 years ago, and in a market filled with big players, Hartalega beat the odds to become the largest nitrile glove producer in the world today.

Over the last four years, it has consistently been growing and surpassing targets.

While it is a mixture of values that gives it a market capitalisaton of RM17.84bil today, a lot can be attributed toward its vision – which is to be the number one glove company that produces and delivers the best and most innovative gloves in the world.

It also wants to be recognised as a caring company to the community and environment.

While there are many reasons for its success, the largest breakthrough for Hartalega came from its invention of the nitrile gloves.

It started off with a single-line operation back in 1988, and business was growing without much pomp until it commenced research and development (R&D) on elastic thin nitrile gloves in 2002.

In 2005, Hartalega became the inventor of the world’s first lightweight nitrile glove, and suddenly this caused a demand shift from latex to nitrile gloves all over the globe.

Today, it is the largest producer of nitrile gloves in the world, capable of manufacturing 30 billion gloves a year and is progressively expanding to 42 billion in 2020. Its workforce has also expanded to 6,600 people across eight manufacturing facilities.

Hartalega acknowledges that all this would not have been possible without its deep-rooted commitment towards innovation.

Innovation is the cornerstone of the group’s success, and thus R&D is fundamental to Hartalega.

“Our pole position in the glove manufacturing sector is based on our innovative products, state-of-the-art manufacturing facilities and advanced proprietary technology.

“Hartalega’s continued technological innovations help ensure our gloves are manufactured with equal emphasis on efficiency and quality; a key reason why we are trusted as the OEM (original equipment manufacturer) for some of the world’s biggest brands,” says Hartalega in its 2017 annual report.