How devaluation of yuan affects other economies

A MONTH after its stock market crash sent jitters through global financial markets, China stunned the world all over again by devaluing its currency – not once, not twice, but thrice in a row – over the week.

Equity markets worldwide sank as a result of that, while Asian currencies – already battered by capital outflows from the region because of expectations that the United States may raise interest rates – plunged to new multi-year lows.

Malaysia’s ringgit, for one, quickly weakened past the critical psychological level of RM4 to the US dollar over the week. It closed at 4.0805 against the greenback yesterday, losing 3.5% in just one week.

Make no mistake, while China says its new policy on the yuan, or sometimes called the renminbi, is to make its exchange rate more “market-oriented”, the move by the world’s second-largest economy has added even more uncertainties to an already-volatile global environment.

For one thing, the cut in the value of the yuan has sent global commodity prices from oil to industrial metals lower. For another, China’s action has sparked fears of a currency war.

So, how does China fix the exchange rate?

The yuan is a tightly controlled currency, with its exchange rate linked to a basket of major currencies, believed to be composed predominantly of the US dollar.

Every morning of a trading day, the People’s Bank of China (PBoC) will set a mid-point for its currency. The yuan will be allowed to move upwards or downwards by 2% from the mid-point.

What did China do over the week?

On Aug 11, PBoC lowered the yuan reference rate, also known as the mid-point, by 1.9% to 6.23 against the US dollar from 6.12 previously. That was the biggest one-day drop in a decade.

The next day, PBoC set the reference lower by another 1.6% to 6.33 against the greenback.

The third cut came on Aug 13, with the PBoC setting the yuan’s reference rate at 6.40 against the US dollar, down by another 1.1%.

At the reference rate of 6.40 against the US dollar, for instance, the yuan will be allowed to fluctuate between 6.27 and 6.53 against the greenback.

There has also been a technical adjustment, whereby the daily target rate for the yuan will now be based on previous day’s closing value, and on the demand and supply of the currency in the market.

Will there be further adjustments?

In an attempt to soothe market sentiment, PBoC at a press conference on Wednesday assured that the yuan adjustment rate was almost completed after the third round of devaluation.

And in defending its policy move, PBoC said there was demand for the devaluation of the yuan against the US dollar, as indicated by continuous outflow from China, and that it would step in when the market is distorted.

In the last one year, while many other currencies have been falling against the US dollar, the yuan has remained strong because of its link to the greenback. This has effectively hurt China’s exports as its products have become relatively more expensive overseas.

Last month, China saw its exports drop 8%, which added to fears that the country could miss its economic growth of 7% this year.

So, many economists see China’s recent currency move as part of an initiative to boost the country’s exports to support growth.

“The Chinese government is prepared to take whatever means necessary to prop up its economy to achieve the minimum 7% growth target,” MIDF Research says in its commentary.

“The latest act reflects China’s intention to boost its economic growth via a higher trade balance,” the brokerage adds.

China, on the other hand, argues that its recent currency move is moving the yuan towards a more “market-oriented” system. This is because China is seeking for the yuan to be included in the International Monetary Fund’s special drawing rights (SDR), which is a global reserve asset comprising the US dollar, euro, pound and yen.

The yuan’s inclusion in the SDR will make it a formal reserve currency.

How will China’s currency move affect the rest of the world?

China is the world’s biggest consumer of commodities.

As investors read the move by China as a signal that the country’s economy could be softening faster than expected, global commodity prices plunged over the week amid fears that a slowdown in the Chinese economy could significantly lower the demand for the products.

China’s action has also sparked fears of a currency war that could see other countries lowering their currencies as well to mitigate the negative impact of a weaker yuan on their exports.

Vietnam, for one, has already responded by widening the dong’s trading band against the US dollar to allow its currency to weaken further against the greenback.

Indeed, the devaluation of the yuan has angered many economies, especially the US, whose currency has already been appreciating against almost all major currencies in the world.

US policymakers have condemned China’s move, which they argue could hurt US manufacturers, as it gives China unfair trade advantage.

Will the move by PboC affect the US Federal Reserve’s stance?

China’s currency move has raised the question over whether the Fed will still proceed with raising interest rates next month as highly anticipated by global markets.

There are differing views on this.

Some economists argue that the quantum of the yuan devaluation is not significant enough to delay a hike in the US interest rate, which has been pegged at near-zero levels since 2009.

They believe the US economy is healthy enough to withstand the negative impact of a cheaper yuan on its trade.

Another school of thought believes the Fed will delay a September rate hike to temper the rising strength of the US dollar.

What does this mean for China’s trading partners?

Essentially, China’s recent currency move has a negative impact on economies that rely on exports to the country.

This is because a weaker yuan could potentially lower China’s domestic spending, as import costs increase, and drive consumers to locally produced goods.

It will also affect countries that compete with China for exports to other countries. This is because a weaker yuan will make China’s exports cheaper, which is a bane for its competitors.

Malaysia is perceived to be among the countries that stand to lose the most from the decline of the yuan against the US dollar.

According to international brokerage Credit Suisse, while Malaysia’s exports do not compete directly with those from China, the country will still be affected, as a weaker yuan could lower China’s domestic spending on imported goods.

“Malaysia is vulnerable because a large portion of its exports end up in China, probably partly reflecting commodities,” the international financial institution says in its report.

China is Malaysia’s second-largest export market, accounting for 12.6% of the latter’s total shipments in the six months to June 2015.

China’s currency move caused Malaysia’s stock market to plunge, with the benchmark FTSE Bursa Malaysia KL Composite Index losing 57.55 points over the week to close at 1,596.82 points yesterday, and the ringgit to fall even further against the US dollar.

Malaysia’s stock market and ringgit decline reflects dampened investor sentiment on the country at a time when it is already battered by domestic political uncertainties, lower commodity prices, and the expectations of a US interest rate hike.

According to Credit Suisse, Malaysia is caught in between a rock and a hard place, as the country may not have many tools left to prevent currency weakness that has raised concerns among its people.

“Interest rate hikes to manage the currency will impose collateral damage on the broader economy at a time when domestic demand is slowing and household debt is elevated at 86% of gross domestic product,” Credit Suisse says.

“Defending the currency by selling foreign exchange reserves is also costly, given that the stock of forex reserves has already fallen below the US$100bil psychological mark even before the Fed has hiked interest rates,” it adds.

On that note, real reforms and less political drama, with more focus on the country’s economy, will be beneficial for Malaysia’s economy. 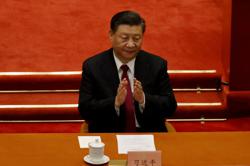