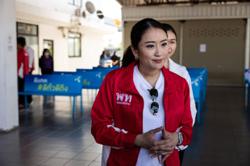 BANGKOK (The Nation/Asia News Network): Cannabis shops have been warned not to use Thai traditional doctors to get around the ban on recreational smoking inside stores.

The ministry has struggled to prevent rampant recreational use of the herb after cannabis shops sprang up across the capital following legalisation earlier this year.

Public Health Minister Anutin Charnvirakul (pic) said cannabis businesses should not seek loopholes to the ban on smoking in stores.

"The ministry did not campaign for people to use cannabis for recreation, so they cannot smoke the decriminalised herb in stores," he said on Sunday. He added that the use of cannabis will be regulated by law.

Cannabis can however be smoked in stores if they have permission to operate as medical facilities, according to the Department of Thai Traditional and Alternative Medicine.

Department director-general Thongchai Lertvilairattanapong said his staff will conduct random surveys of stores where cannabis is being sold in the next two weeks to ensure compliance with this rule.

Decriminalisation of the herb occurred in a legal vacuum that has left shops and users uncertain of their rights. Consumption of cannabis in public remains banned.

Meanwhile, legislation to control cannabis use and trade is pending, though some MPs and doctors want legalisation to be revoked.