Harris’ visit a show of support

Vice-President Kamala Harris (pic) will travel next week to the western island province of Palawan as part of a two-nation Asia trip that includes filling in for President Joe Biden at an Asia-Pacific Economic Cooperation summit in Bangkok.

She will be the highest-ranking US official ever to visit Palawan, the largest Philippine province, which lies along hotly contested waters in the South China Sea.

“This visit demonstrates the Biden-Harris administration’s commitment to stand with our Philippine ally in upholding the rules-based international maritime order in the South China Sea,” a US official told reporters on customary condition of anonymity.

Harris, who will meet a day earlier in Manila with President Ferdinand Marcos, will visit residents, civil society and the Philippine Coast Guard in Palawan’s capital Puerto Princesa.

The trip will “reaffirm our defence commitments to the Philippines and the importance of our alliance in peace and stability in the South China Sea”, the official said.

She will also discuss countering illegal fishing and hold a separate event on women’s empowerment.

The United States, which has a treaty alliance with its former colony, has been increasingly outspoken in supporting South-East Asian nations in myriad disputes with a more assertive China.

China claims sovereignty over almost the entire South China Sea, while the Philippines, Vietnam, Malaysia and Brunei have overlapping claims to parts of it.

Beijing has ignored a 2016 international tribunal ruling that its claims have no legal basis.

Unlike his predecessor Rodrigo Duterte, who set aside his country’s legal victory, Marcos has pledged to uphold the court decision and insisted he would not let China trample on Manila’s maritime rights.

Tensions between Manila and Beijing flared last year after hundreds of Chinese vessels were detected at Whitsun Reef in the Spratly Islands, which lie in the disputed waters.

The announcement of the Harris visit comes days after Biden met Chinese President Xi Jinping on the sidelines of a G20 summit in Bali, where both leaders voiced hope for preventing tensions from spiralling out of control.

Biden, on a trip that has also taken him to a summit in Cambodia and the UN climate conference in Egypt, is skipping the Apec summit in Bangkok to attend his granddaughter’s wedding. — AFP 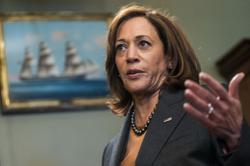