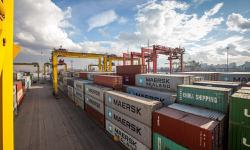 Among the main products Cambodia shipped to China were cassava.

PHNOM PENH (Xinhua): Trade volume between Cambodia and China was valued at US$6.97 billion in the first seven months of 2022, up 15.6 per cent year-on-year, according to the General Department of Customs and Excise's report released on Wednesday (Aug 10).

China remained the largest trading partner of Cambodia, followed by the United States, Vietnam, Thailand and Singapore, the report said.

It added that trade with China accounted for 21 per cent of Cambodia's total trade volume of $32.8 billion during the January-July period.

The main products Cambodia shipped to China were milled rice, bananas, mangos, cassava, fishery and apparels, while it imported from China mostly garment raw materials, machinery, vehicles, foodstuffs, electronics and medicines, among others.

Cambodian Ministry of Commerce's undersecretary of state and spokesman Penn Sovicheat said trade cooperation between the two countries has been rising despite the adverse impact of the Covid-19 pandemic.

"China is a huge market for Cambodia, and despite the pandemic, our bilateral trade volume has steadily increased," he told Xinhua.

Sovicheat said the Regional Comprehensive Economic Partnership (RCEP) free trade agreement and the Cambodia-China Free Trade Agreement (CCFTA), both of which entered into force earlier this year, have been injecting new impetus into the trade relations between the two countries.

"Under the two free trade agreements, we're confident that our bilateral trade and investment volumes will continue to grow in the coming years," he said.

Senior economist Ky Sereyvath, director-general of the Institute of China Studies at the Royal Academy of Cambodia, agreed that both pacts have given a big boost to the trade volume between the two Asian nations.

"Through RCEP and the CCFTA, I think Cambodia can be a hub-and-spoke model to distribute goods from China to the Association of Southeast Asian Nations (Asean) region in the future," he told Xinhua.