MOSCOW (Vietnam News/Asia News Network): President Nguyễn Xuân Phúc has asked ministries, agencies and businesses of Việt Nam and Russia to seek ways to lift two-way trade by 15 times from the current US$5 billion and tripling investment in the near future.

Addressing the Vetnam-Russia Business Forum that drew 80 firms from both sides in Moscow on Wednesday, Phúc said Vietnam is one of the 20 most successful countries globally in terms of foreign direct investment attraction.

He suggested Russian firms study more about the Vietnamese market and vice versa to achieve better results and reach bilateral trade levels commensurate with the traditional, profound relations between the two countries.

The President affirmed that Vietnam will try to build stable and predictable policy and institutions, adding that he requested Vietnamese localities and ministries, especially the Ministry of Planning and Investment, to coordinate effectively to attract capital flows and formulate ideas to create momentum in trade and investment.

As room for bilateral economic cooperation remains large, trust in political, diplomatic and economic ties will open up new chapters in the near future, he said, adding that the two countries’ authorities need to work closely together to deal with existing obstacles.

The success of Russian investors is the expectation and pride of Vietnam, he stated.

President of the Russian Union of Industrialists and Entrepreneurs Alexander Shokhin, for his part, said Russian and Vietnamese firms need to capitalise on advantages from the Free Trade Agreement between Vietnam and the Eurasian Economic Union, adding Russian companies are interested in investing in Vietnam.

Entrepreneurs at the event expressed their willingness to invest in each other on the back of the two nations' long-standing ties as well as opportunities and incentives offered by each country.

A new direct route between Việt Nam and Moscow, Russia, conducted by Vietjet was also announced at the forum, along with several other deals, including a tripartite agreement between HDBank and the International Chess Federation and Vietnam Chess Federation on 10-year support for the World Ches Championship. — 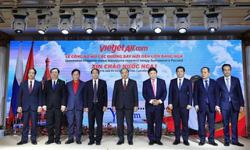