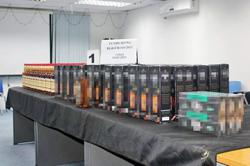 On July 16, customs officers at the Sungai Tujoh Control Post in Kuala Belait intercepted 76 boxes of various beauty products, 48 bottles of Anti-Rust spray and nine boxes of electrical appliances that were not stated in the Customs Import Declaration Form.

The following day, the customs law enforcement unit conducted a raid on a staff house and store-room in Kampong Negalang, Temburong District, where two Indonesian men aged 27 and 46 were detained for the alleged possession of one carton, 26 packs and 16 sticks of cigarettes in various brands.

Among the undeclared items were eight watches including one smart watch, one push-and-pop toy, six boxes of herbal tea requiring a permit from the Brunei Darussalam Food Authority (BDFA), and 33 boxes of beauty care products which require a permit from the Department of Pharmaceutical Services at the Ministry of Health (MoH).

On the same day, following a public tip-off, a 49-year-old permanent resident was apprehended for the possession of more than 50 cartons of cigarettes in various brands at a private school in Kuala Belait.

Bringing commercial and private commodities into the country without a valid declaration form is an offence under the Customs Order 2006 and Excise Order 2006.

If convicted, the custom agencies involved are liable to a compound fine not exceeding BND5,000, or prosecuted and have their licence permits revoked.

Members of the public are urged to steer clear of smuggling activities or the import-export of contraband and prohibited items without the authorisation from the relevant agencies, which are offences under Section 146 of the Excise Order 2006.

To report smuggling activities or violations of Customs regulations, call 8714422/8721422 or visit the nearest Customs office.

The identities of the informants will be kept strictly confidential. - Borneo Bulletin/Asia News Network 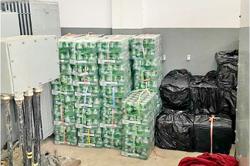