BEIJING, May 22 (Xinhua): China's first Mars rover, Zhurong, drove down from its landing platform to the Martian surface on Saturday, leaving the country's first "footprints" on the red planet.

Zhurong's first successful drive made China the second country after the United States to land and operate a rover on Mars.

The six-wheeled solar-powered rover, resembling a blue butterfly and with a mass of 240 kg, slowly trundled off a ramp on the lander to hit the red, sandy soil of Mars, starting its journey to explore the fourth planet from the sun.

According to the telemetry data, Zhurong set its wheels on Martian soil at 10:40 a.m. (Beijing Time) on Saturday, the China National Space Administration (CNSA) said.

China's Tianwen-1 mission, consisting of an orbiter, a lander, and a rover, was launched on July 23, 2020. The lander carrying the rover touched down in the southern part of Utopia Planitia, a vast plain on the northern hemisphere of Mars, on May 15.

The rover Zhurong is named after the god of fire in ancient Chinese mythology. The name echoes with the Chinese name for the red planet, Huoxing (the planet of fire), while the name of the mission, Tianwen, means Questions to Heaven, the title of a poem by the ancient Chinese poet Qu Yuan (circa 340-278 BC).

With an expected lifespan of at least 90 Martian days (about three months on Earth), Zhurong will record the Martian landscape with high-resolution three-dimensional images, analyze the material composition of the planet's surface, detect its sub-surface structure and magnetic field, search for traces of water ice and observe the surrounding meteorological environment.

The orbiter, with a design life of one Martian year (about 687 days on Earth), will relay communications for the rover while conducting its own scientific detection operations.

Compared with China's lunar rover Yutu (Jade Rabbit), Zhurong has a similar speed of about 200 meters per hour, but the height of the obstacles it can surmount increased from 20 cm to 30 cm. It can climb slopes up to 20 degrees. Zhurong's six wheels are independently driven, according to its designers.

The United States has deployed five rovers on Mars. As a latecomer, Zhurong has unique characteristics.

It is the first Mars rover with an active suspension system. It could help the rover get out of trouble by moving like an inchworm on the complicated Martian surface with both loose sandy soil and densely distributed rocks, said Jia Yang, deputy chief designer of the Tianwen-1 probe, from the China Academy of Space Technology.

Zhurong can also walk sideways like a crab. Each of its six wheels can turn in any direction, which could be used for avoiding obstacles and climbing slopes.

Mars is farther away from the sun than Earth and the moon, and the Martian atmosphere also reduces sunlight, so the solar panels of the Mars rover are about twice that of the lunar rover. They need to be rotatable to follow the sun, said Geng Yan, an official at the Lunar Exploration and Space Program Center of the CNSA.

Zhurong's solar panels were specially designed to adapt to the sunlight on Mars, which has a spectrum different from that on the Earth's orbit, Geng said.

Mars is notorious for its sand storms, and the dust could reduce the efficiency of power generation. The specially processed solar panels make it difficult for dust to accumulate, just like the water drops on the lotus leaf, which can be blown away by the wind, Geng said.

Part of the power generated by the solar panels during the daytime will be used for work, and the rest will be stored in batteries for night use.

In addition, the designers creatively installed heat collection windows on the rover, which could absorb solar energy in the daytime and release heat at night to help the rover survive the freezing temperatures which could plunge to over 100 degrees Celsius below zero before dawn.

The robotic Zhurong will operate with a cycle in the order of environmental perception, scientific exploration, and movement, according to Geng.

The one-way communication time delay of about 20 minutes between Earth and Mars due to the long distance between the two planets requires the Mars rover to operate and deal with complex problems autonomously since ground control may not be timely.

For instance, it can independently plan the route from one position to another, judge whether it can pass an obstacle, and choose the best way to avoid it, said Jia.

In the case of a sandstorm, Zhurong can decide when to cancel its work and "go to sleep" autonomously and wake up when sunlight is sufficient again.

The Mars rover is a new platform for the mobile exploration of an extraterrestrial object, with many novel technologies applied in spacecraft for the first time, said the designers.

"When designing the Mars rover, we had many rounds of brainstorms to create a powerful and pretty rover that could represent the best level of Chinese space engineers," said Jia. 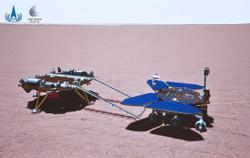