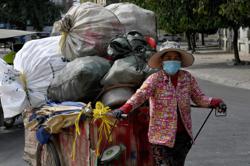 File picture of panda painting by Chinese artists. - The Star/ANN

Held at the Chinese Culture House, the 10-day event displayed dozens of giant panda paintings and sculptures that depicted the graceful life of the rare animal.

"The giant panda is a cross-border messenger who helps promote Chinese culture to the world," she said.

"I believe that the exhibition will further promote cultural exchanges between China and Cambodia, enhance mutual understanding and profound friendship between the two peoples, and inject a fresh impetus into the cultural cooperation between the two countries," Zuo added.

Cambodian Ministry of Culture and Fine Arts Secretary of State Minh Kosny said the event would contribute further to enhancing people-to-people bonds between the two countries.

"The exhibition is vital to help visitors to further understand about the giant panda, which is the national treasure in China," she said.

Adored around the world, the giant panda is perhaps the most powerful symbol in the world when it comes to species conservation, the World Wildlife Fund (WWF) said, adding that the species remains one of the rarest and most endangered bears in the world.

Ngov Thaylong, a 22-year-old visitor, said the exhibition showed China's efforts to conserve this rare species, and it would help visitors to better understand about Chinese culture.

"This is the first time I see the giant panda painting art show," he told Xinhua. "These paintings are so beautiful and vivid. The painters are really professional and talented."

"I like giant pandas because they look so cute," said another visitor Sok Heng, 17.

"I hope this exhibition will help raise awareness of the conservation of this globally endangered species," she added.