JAKARTA (The Straits Times/ANN): Indonesian President Joko Widodo received his first dose of the China-made Sinovac vaccine on Wednesday (Jan 13), kicking off a nation-wide vaccination drive against the coronavirus to curb surging infections and deaths in the country worst hit by the virus in South-east Asia.

The vaccination at the state palace was broadcast live on the presidential secretariat's YouTube channel.

Joko, better known as Jokowi, was the first person to be inoculated to give Indonesians the confidence that the vaccine was not only safe and effective, but also halal, or permissible for consumption by Muslims.

In a Jan 7 Facebook post, he wrote: "Why is the President the first? It's not because I want to put myself before everyone else, but so that all will be convinced that this vaccine is safe and halal. So just get ready."

The food and drug monitoring agency, known as BPOM, on Monday (Jan 11) also granted the vaccine emergency use approval based on interim data showing it is 65.3 per cent effective, above the World Health Organization threshold of 50 per cent.

Indonesia had participated in the third phase clinical trials of the vaccine with 1,620 volunteers in Bandung, West Java. The trials are still ongoing.

Indonesia is struggling to contain the outbreak which has overwhelmed the healthcare system, left nearly 10 million people jobless, and dragged the country into its worst recession in 22 years.

With more than 846,000 cases, including over 24,600 deaths to date, the authorities are pinning their hopes on a vaccine to help ride the country out of the health and economic crisis.

Joko is expected to meet on Wednesday with Chinese Foreign Minister Wang Yi, who is in Jakarta for two days as part of his five-day tour of South-east Asia.

Besides the president, a number of Cabinet members, religious leaders and influencers would be immunised on Wednesday (Jan 13) to build public confidence.

The Health Ministry had announced that the first phase from January to April would prioritise high-risk groups including 1.3 million health workers and 17.4 million public workers in all 34 provinces, followed by the general public.

Rolling out the vaccination programme, Health Minister Budi Gunadi Sadikin on Wednesday said: "The participation of all Indonesians will greatly determine the success of this programme. Hopefully, all will... support this programme to build an Indonesia and a world which are healthier and free from Covid-19 pandemic."

The government hopes to have inoculated around 70 per cent of its population to reach herd immunity in just 15 months, or by March next year (2022).

Some health experts were sceptical of the ambitious timeline, with Dr Hermawan Saputra from the Indonesian Public Health Experts Association saying that 3.5 years would be a more realistic target to complete the vaccination programme, according to the Jakarta Post. - The Straits Times/Asia News Network 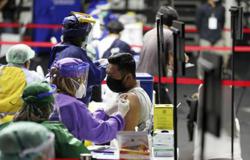