A pile of illegal seized drugs is set on fire during a destruction ceremony to mark the United Nation' "International Day against Drug Abuse and Illicit Trafficking" in Phnom Penh on June 26, 2020. - AFP

From January to August 2020, some 8,485 people were nabbed for alleged drug trafficking and 5,553 were caught for drug use, the report said, adding that 201 of them are foreigners.

In 2019, the Southeast Asian country arrested 20,113 drug suspects, including 401 foreigners, seizing about 720 kg of illicit drugs.

Cambodia has no death sentence for drug traffickers. Under its law, anyone found guilty of trafficking more than 80gm of illicit drug could be jailed for life. 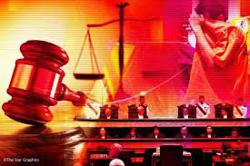