The nation banned the export of milled rice for a short time at the beginning of the Covid-19 outbreak to ensure local food security, he said, adding that the ban has been lifted when rice stock is abundant.

According to Cambodia’s Ministry of Agriculture, Forestry and Fisheries, in the first half of this year, a total of 397,660 tonnes of milled rice were exported to 56 countries worldwide, up about 41 per cent annually.

On the tourism sector, the government said that Cambodia received 1.17 million foreign visitors during the first five months of 2020, down 59 percent from 2.88 million over the same period last year, said a report released by the Ministry of Tourism.

China, Vietnam, Thailand, the United States and South Korea were the biggest sources of foreign tourists to the Southeast Asian country during the January-May period this year, the report said.

The sharp decline in the number of foreign tourists to cambodia was due to the Covid-19 pandemic that forced the country to impose entry restrictions for all foreign travellers since March. - Bernama
Article type: metered
User Type: anonymous web
User Status:
Campaign ID: 18
Cxense type: free
User access status: 3 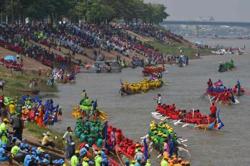