SAN FRANCISCO: Google Inc is developing airborne drones capable of flying on their own and delivering anything from candy to medicine, the Internet company said on Thursday.

The effort, which Google calls Project Wing, marks the company's latest expansion beyond its Web-based origins and could help Google break into lucrative markets such as commerce and package delivery, ratcheting up the competition with Amazon.com Inc.

Google, the world's largest Internet search engine, said it will take years of development to create a service with multiple vehicles flying multiple deliveries per day. 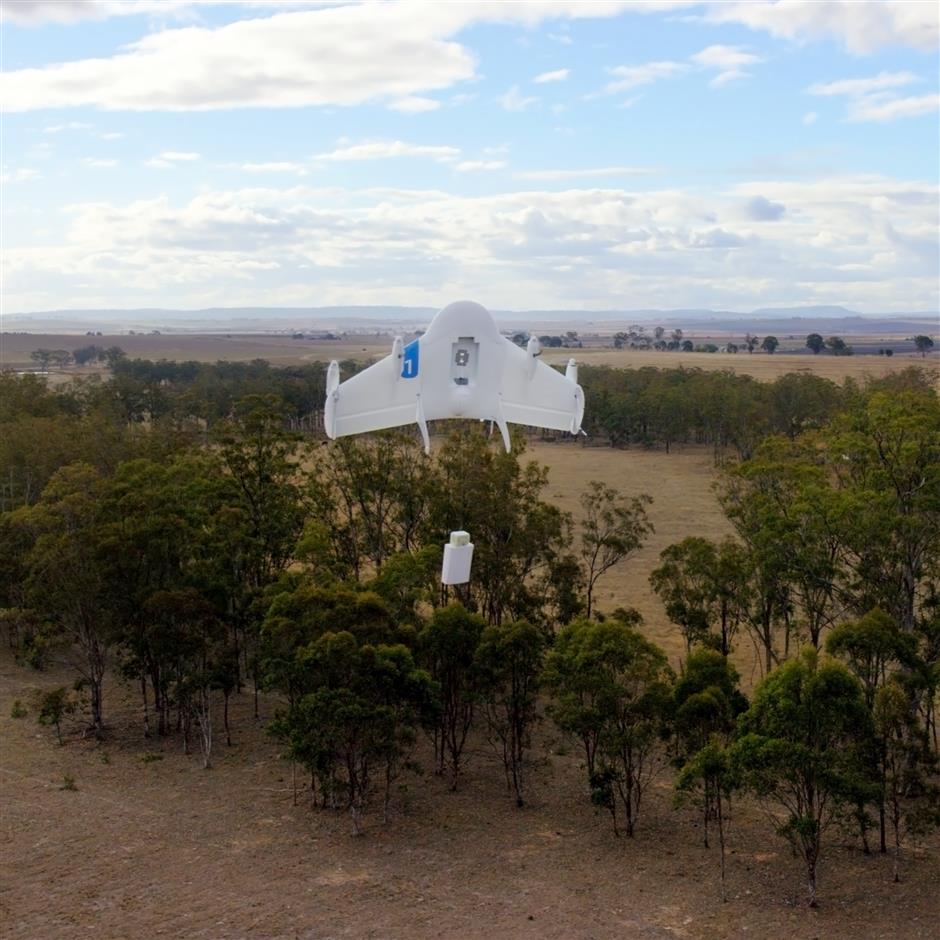 SUPER AMBITIOUS: A Project Wing drone vehicle during delivery. Google's secretive research laboratory is trying to build a fleet of drones designed to bypass earthbound traffic so packages can be delivered to people more quickly.

An early version of the drone, which Google showcased in a video on its website, has a 1.5m wide wingspan and is capable of flying pre-programmed routes.

"These planes have much more in common with the Google self-driving car than the remote-controlled airplanes people fly in parks on weekends," Google said on its website, referring to the company's test fleet of automobiles that use sensors and radars to navigate city streets and freeways on their own.

The drone Google showed in the video Thursday was equipped with rotors to allow for vertical takeoff and landing, as well as a fixed wing for plane-like flying. The drone flew about 40 metres above the treeline, Google said, and dropped a package of chocolate bars to a farmer in Queensland, Australia.

Google spokesman Ray Gobberg said it was too soon to discuss specific business plans for the delivery drones, but the company said on its website that self-flying vehicles could offer a cheaper, faster and less wasteful way to move goods.

"Local delivery of products is the next battlefront," said Sameet Sinha, an analyst with B. Riley & Co. "Google has had its eyes on e-commerce, basically trying to get around Amazon." THE NEXT FRONTIER: Google is now focusing on teaching the drones to safely navigate around each other, reducing the noise of the vehicles and refining the delivery capability. — Google

Google has partnered with local retailers in San Francisco, Los Angeles and New York for its Shopping Express service, which allows consumers to order goods online and have them delivered to their doorstep on the same day.

While Google has been quietly developing its aerial drone project since late 2011, the company will now focus on teaching the vehicles to safely navigate around each other, to reduce the noise of the vehicles and to refine the delivery capability such that a package can be delivered to a spot the size of a doorstep.

Google's Gobberg said the company has briefed the Federal Aviation Administration on the project and has been updating the agency. Gobberg said Google has done some "small scale research flights" in the United States but hoped to talk more with the agency to determine specific locations for testing.

In 2012, Congress required the FAA to establish a road map for the broader use of drones. The FAA has allowed limited use of drones in the United States for surveillance, law enforcement, atmospheric research and other applications. — Reuters