NUSAJAYA: Major logging activity that has been ongoing at the Gunung Pulai Forest Reserves in Kulaijaya has sparked worries over possible landslide occurrences among the local community here.

Resident and avid hiker Mohamad Kamarul Ariffin Harris Fadzillah said that although the logging activity has been permitted and licensed by the relevant authorities, he alleged that it was being conducted unsystematically and uncontrollably.

“We are afraid that logging activities in the forest, which now looks bare even from a distance, will cause soil erosion instability to the ground especially during rainy season.

“As many already know, the Gunung Pulai Forest is a popular tourist destination among locals and foreigners and it would be such a waste to lose it,” he said when met during the handing over of memorandum here on Tuesday.

Some 700 hikers, nearby residents and nature lovers signed a memorandum to highlight the logging issue to the state government, which was handed over to the Mentri Besar’s political secretary Mohammad Khairi A Malik at his office in Kota Iskandar here.

Mohamad Kamarul added that the logging activities also caused huge potholes along the roads leading up to the forest as many heavy vehicles passed through the area and the debris has also caused breathing difficulties especially among senior citizens.

Kulai MP Teo Nie Ching, who handed the memorandum together with some residents, urged the state government to look into the matter seriously, as it was announced last June by Mentri Besar Datuk Mohamed Khaled Nordin that all logging activities would be halted in the state.

“We hope that the state government will investigate the matter, as it is learnt that the company obtained the approval to conduct the logging activities between December last year and May this year,” she told reporters.

Teo also suggested that the state government should consider gazetting the Gunung Pulai Forest as a protected forest instead of production forest to eliminate any possibilities of deforestation in the future.

“According to the Natural Resources and Environment Ministry, Johor has allocated only 4,448km sq of its 19,210km sq of land as forest reserves, which is relatively low when compared to other states.

“Not only should the state government consider increasing the allocation for forest reserves but also categorise more of the reserve as protected forest instead of production forest, which allows room for logging activities,” she said.

She added that currently Johor has gazetted some 2,215 km sq or 49.8% as production forest while protected forest was only 2,106km sq or 47.3% from the total forest reserves,” she added.

Teo stressed that Johor should seriously consider the suggestion, as the state did not depend on logging activities to boost its economy unlike Kelantan.

Mohammad Khairi, who accepted the memorandum on behalf of Mohamed Khaled, said that the matter would be forward to the latter but declined to comment further. 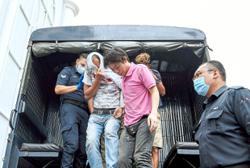