The Securities Commission (SC) said in a statement yesterday that the sentence was imposed by the Court of Appeal.

Tok, 45, was charged in the Sessions Court in 2011 with one count of providing false information in the company’s prospectus under Section 55 of the Securities Commission Act (SCA) and four counts of submitting false statements to Bursa Malaysia in the company’s quarterly reports between October 2005 and July 2006 under Section 122B of the Securities Industry Act (SIA).

Tok pleaded guilty to the charges and was fined a total of RM1.1mil by the Sessions Court in 2011, the SC said.

It added that the Court of Appeal allowed the SC’s appeal by imposing the imprisonment term against Tok in addition to the fine imposed earlier.

“Tok was sentenced to a total of 45 months imprisonment, whereby he was imposed with nine months jail term for each charge. The court ordered the jail term for the four charges under Section 122B to be served concurrently,” the SC said.

Tok was charged together with two former directors of Inix, Mok Chin Fan, 57, and Cheong Kok Yai, 55, as well as former account executive of the company, Normah Sapar, 41.

The SC said the Court of Appeal allowed the prosecution’s appeal against the three individuals.

Mok and Cheong had previously pleaded guilty at the Sessions Court and were fined RM325,000 each while Normah was fined RM350,000. 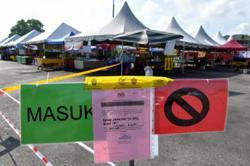