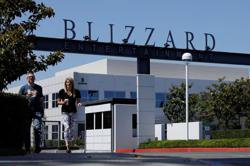 Video game developer Ben Esposito’s first big break was a quirky game called Donut County starring a raccoon who dropped small objects and then entire neighbourhoods into an ever-growing hole in the ground.

His latest, Neon White, is a campy twist on the first-person shooter genre that involves careening across heaven at breakneck speeds to stop a demon invasion. Drawn in an anime style and with a romantic subplot, it’s nominated for “Best Indie” and “Best Action” game at Thursday’s Game Awards, an Oscars-like event for the video game industry.

Every year, some tiny and independent video game developer studios like Esposito's Angel Matrix hold their own with the big leagues by making hit games that achieve commercial success or at least critical acclaim. Even one of the world’s most popular games, Minecraft, was started by an independent game developer in Sweden who later sold his studio to Microsoft for US$2.5bil (RM10.99bil).

“I have really odd taste,” said Esposito, 33. “When I’m picking stuff, it’s about trying to come up with that rare intersection of something that is offbeat and interesting to me, but if presented the right way, it could be financially successful.”

How long these “indie” studios can flourish is up for debate as the gaming industry undergoes increasing consolidation – symbolised by Xbox-maker Microsoft’s pending US$69bil (RM303.42bil) takeover of giant game publisher Activision Blizzard that awaits approval from US and European regulators.

Esposito, the game’s co-creator and director, and his wife, co-creator Geneva Hodgson, worked out of their home near Los Angeles to lead development of Neon White over the past three years. At the height of production, about five people worked full time on the game. Add friends, contractors and freelancers and it was still fewer than 20 people who touched the product, Esposito said.

And while there’s no one formula for transforming an offbeat idea into a blockbuster hit found on computers, phones or a family’s PlayStation, Xbox or Nintendo Switch, there are plenty of indie studios that have managed to build an audience for their games.

Thursday’s Game Awards event in Los Angeles is showcasing several. Those include the French-made summer hit Stray, about a cute cat navigating the alleyways of a post-apocalyptic city; another game about a cult led by a possessed lamb; and the retro-looking Vampire Survivors that pits its hero against a constant stream of monsters.

But as the industry keeps consolidating, some developers including Esposito worry that a golden age for high-quality indie games could be threatened as a smaller group of distributors makes choices about what gets funded.

“When it comes to bigger budgets, it’s a challenge because the industry feels like it’s contracting a bit,” he said. “Studios get bought up. Talent gets concentrated into certain areas and then budgets change.”

Games that Esposito describes as having middle-tier budgets in the US$2 million range – neither cheap to make, nor as expensive as the major studio franchises – could get sidelined.

“I think we’re seeing that kind of mid-budget game start to disappear,” he said. “I think that’s really sad because that’s the kind of budget that I think can produce really interesting, odd, risky but well-realised projects and I think Neon White’s one of those.”

Both Stray and Neon White benefited from the support of arthouse publisher Annapurna Interactive, the games division of the film studio behind movies like Her and American Hustle. In the case of Neon White, that allowed Esposito’s team to enhance the game by hiring professional voice actors.

“It’s always a very risky endeavor to make an independent video game,” said Stray producer Swann Martin-Raget. The tools to make games are becoming more accessible, and so many studios are making them that it can be “really hard to get people’s attention”, he said.

Stray captured plenty of people’s attention this summer with its cinematic visuals of a realistic-looking tabby cat scampering around a city menaced by robots and other hazards. Its maker was BlueTwelve Studio, a small team of developers in the southern French city of Montpellier, some of whom previously worked at the nearby office of big game-maker Ubisoft.

As a sign of its upstart success, Stray is competing against big-budget blockbusters like Bandai Namco’s Elden Ring and Sony’s God Of War Ragnarök for Thursday’s prestigious “Game of the Year” award.

It used to mean “you have a small team, they do everything themselves and they release it without a publisher and they do not care about success. That was part of the original kind of indie spirit.” Now it sometimes describes anything that doesn’t come out of big studios making the highest-profile games.

“So it could even be somebody who has a publisher, some quite large studios actually, and budgets that might run into tens of millions of dollars that still get classed as indie,” Bailey said.

Bailey said there’s no question that players today have a rich and diverse collection of games to choose from on consoles, and from popular web-based game platforms such as Steam or Epic.

“There’s this interesting balancing act that’s taking place that the opportunities now are greater than they’ve ever been” for independent developers, Bailey said. “But the competition itself is absolutely massive.”

In the short term, the consolidation could be good for independent developers as companies like Microsoft strive to offer the widest possible array of games to get people hooked on buying a monthly subscription-based service such as Xbox Game Pass.

In the longer term, there’s more uncertainty if the game market starts to look more like streaming movie services like Netflix that can apportion budgets and contracts based on past viewership, Bailey said.

“In the future, when Xbox is focusing on profitability instead of expansion and acquisition, there might be a change of power,” he said. “It might be harder for indies to get traction on subscription platforms. It’s great for the people who are on there who get to be part of that wave, but the ones who are off, things might get harder.” – AP

Netflix wants to be a player in gaming. Can it succeed?

‘Blizzard 2.0’ storms in to make the games Blizzard no longer wants to