TUCSON, Arizona: Deep in the Arizona desert on the southern US border, a surveillance tower rises more than 150 feet (46 m) into the air, its swiveling cameras taking in the surrounding valley.

With a viewing range of up to 7.5 miles (12 km), it can watch over three nearby communities and into the foothills of the Baboquivari mountains, one of the most treacherous paths for migrants crossing from Mexico into the United States.

The newly-installed tower is among the latest additions to the so-called digital border wall that US border enforcement agents say they rely on to safeguard the nearly 2,000 mile frontier.

Humanitarians and academics worry though that the ballooning surveillance apparatus is creating a deathtrap for migrants.

“Out here, surveillance equals death,” said Sam Chambers, a geographer at the University of Arizona who studies surveillance infrastructure and migration.

“The more cameras you put up, the more migrants are forced to take longer, riskier routes to avoid them – putting their bodies under stress and their lives in danger,” he told the Thomson Reuters Foundation.

The growing assemblage of cameras, sensors, drones, and aerial surveillance is especially visible along the Arizona border zone known as the Tucson Sector, one of the busiest and deadliest crossing points for migrants from Mexico.

Since the 1990s, US border forces have attempted to block migrants from crossing into urban areas, Chambers said, with traditional checkpoints gradually superseded by technology that monitors huge tracts of land.

Chambers builds intricate models that show how camera towers push migrants away from safer, more direct routes to circuitous paths through hard-to-monitor mountainous zones and deserts where scores die from thirst and exposure to extreme weather.

He has calculated that the routes which migrants take to avoid detection often require more water than they can carry and more exertion than the traditional ones – with deadly results.

Using data from the coroner’s office, Chambers has mapped how the locations of corpses found in the desert have changed in response to the surveillance push, with more bodies now being uncovered in remote areas outside the towers’ range.

“There’s simply no humanitarian way to surveil the border,” he said.

According to a Government Accountability Office report, US$743mil (RM3.39bil) was allocated for border surveillance tech from 2017-20 under former US President Donald Trump.

While Trump planned to construct a physical border wall, US President Joe Biden froze the project on his first day in office and pledged a more “humane” policy.

The Biden administration is voicing support for tech-enabled smart borders that use data analysis and AI to monitor and respond to events, and is directing money into digital surveillance tools.

In July, Biden inked a deal with the Mexican government to funnel more than US$1.5bil (RM6.86bil) into border infrastructure, with much of the funds going to smart technologies.

At the border patrol’s Tucson station operations room, agents pull in a staggering amount of intelligence.

There are real-time feeds from hundreds of motion sensors placed on suspected migrant routes, short-range cameras hidden in trees, and images from high-powered camera towers. Cameras even monitor the underground drainage system of the US border town of Nogales for migrants scrambling through the tunnels.

All of this data streaming into the operations room will soon be accessible on agents’ smartphones in the field, through an app that is currently being piloted in Arizona.

“This is the proving ground for all sorts of tech,” said Jose Robert Ortiz, a border agent who was recently trained to fly a drone.

Border authorities say that people smugglers are to blame for migrants’ deaths, and hi-tech surveillance is necessary to find – and save – people in an increasingly difficult job.

Arrests of undocumented migrants hit a record of over two million this year. Known deaths on the United States-Mexico border reached a high of 727 last year, according to data compiled by the UN’s International Organization for Migration.

“(People smugglers) take them up to the mountains and say, ‘Go, this is your best chance’. They don’t care about human life,” said John Mennell, a spokesperson for Arizona’s border patrol force.

“When people get in trouble, we go help them – and the surveillance helps us know where they are,” he said, noting that agents respond to over a dozen calls for help a day.

Paige Corich-Kleim, a spokesperson with humanitarian group No Mas Muertes, which means No More Deaths, said that the involvement of people smugglers was largely reaction to US border policy.

“By making it harder to cross, migrants had to turn to these groups for help – it used to be a simple journey,” she said.

Agents say it is hard to draw a direct connection between the surveillance tech and an uptick in arrests at the border, but the tools provide “situational awareness” in an environment where law enforcement is outnumbered by migrants seeking to cross.

On one day in September, agents remotely redirected a camera to home in on a group of migrants crossing a mountain ridge after they tripped a motion sensor.

The group was just outside the camera’s range, about eight miles away, making the figures slightly blurry on the computer screen. But agents knew the path they were likely to take, and planned to intercept them when they descended the mountain.

Agents estimate they have approximately three days to catch a migrant after they cross into a town on foot or get picked up by a vehicle before they melt into the broader population, what agents call the vanishing line.

“The mission here is to detect, identify, and classify,” said Steven Adkison, deputy chief of border patrol in the Tucson Sector. “Our aim is area dominance.”

In 2021, 225 bodies were found near the Arizona border – the highest number since humanitarian groups started keeping count in the 1990s, and likely a severe undercount, as bodies often languish for years in the desert before they are found.

When Daukei was growing up in the 1980s, migrants rarely crossed in the remote reaches of the reservation, but stepped up enforcement in urban areas is funnelling more migrants on to the tribe’s land, he said.

Tohono O’odham leaders have grudgingly welcomed the new surveillance towers, saying they are necessary to help protect tribal members from the smuggling cartels that increasingly come on to their land.

“There are now people walking around with guns, homes have been broken into ... we are desperate for security,” said Kendall Jose, vice chairperson of the reservation's Chukut Kuk District, where surveillance towers were recently erected.

The aid groups that have sprung to provide migrants with food, water and medical help doubt that the more surveillance technology will result in a safer border region.

“There’s this idea that building a wall is violent and xenophobic but smart tech is not,” said Corich-Kleim of No Mas Muertes. “But really, it has the same effect.” – Thomson Reuters Foundation 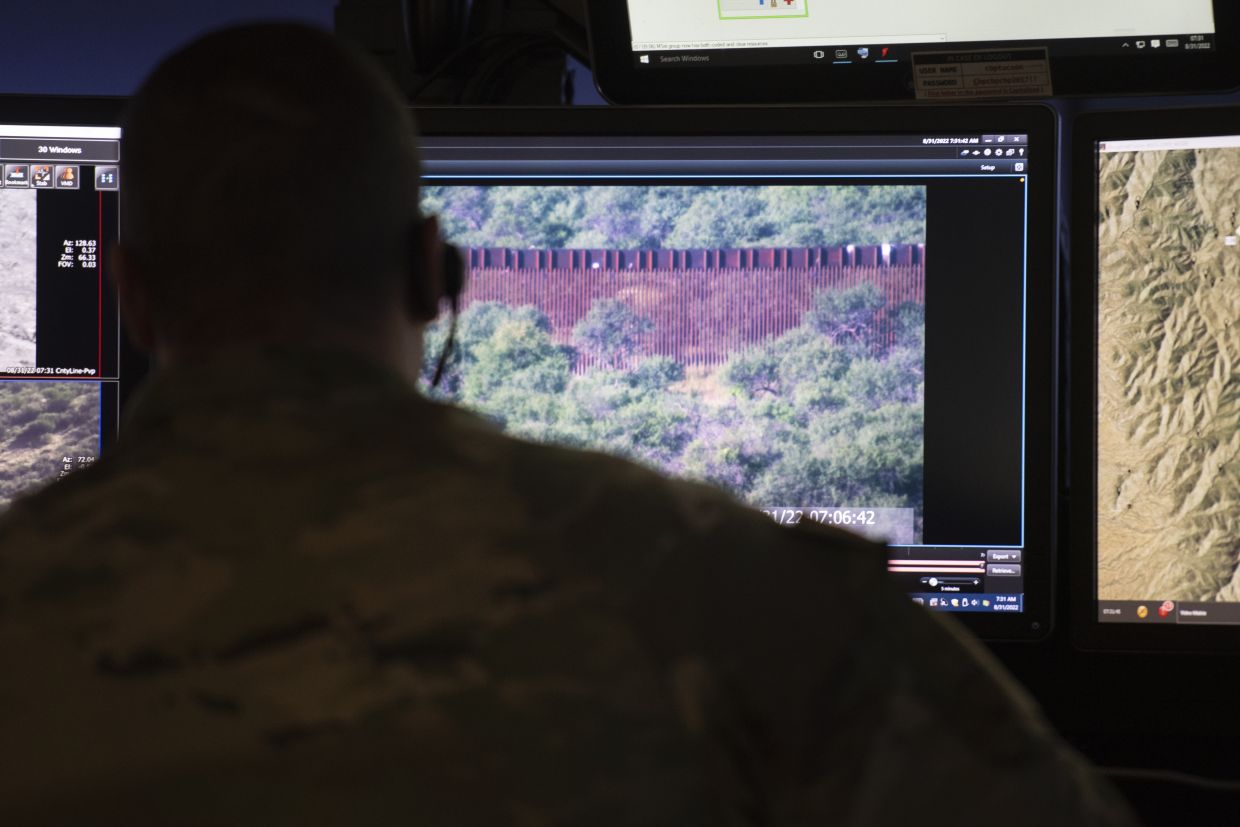 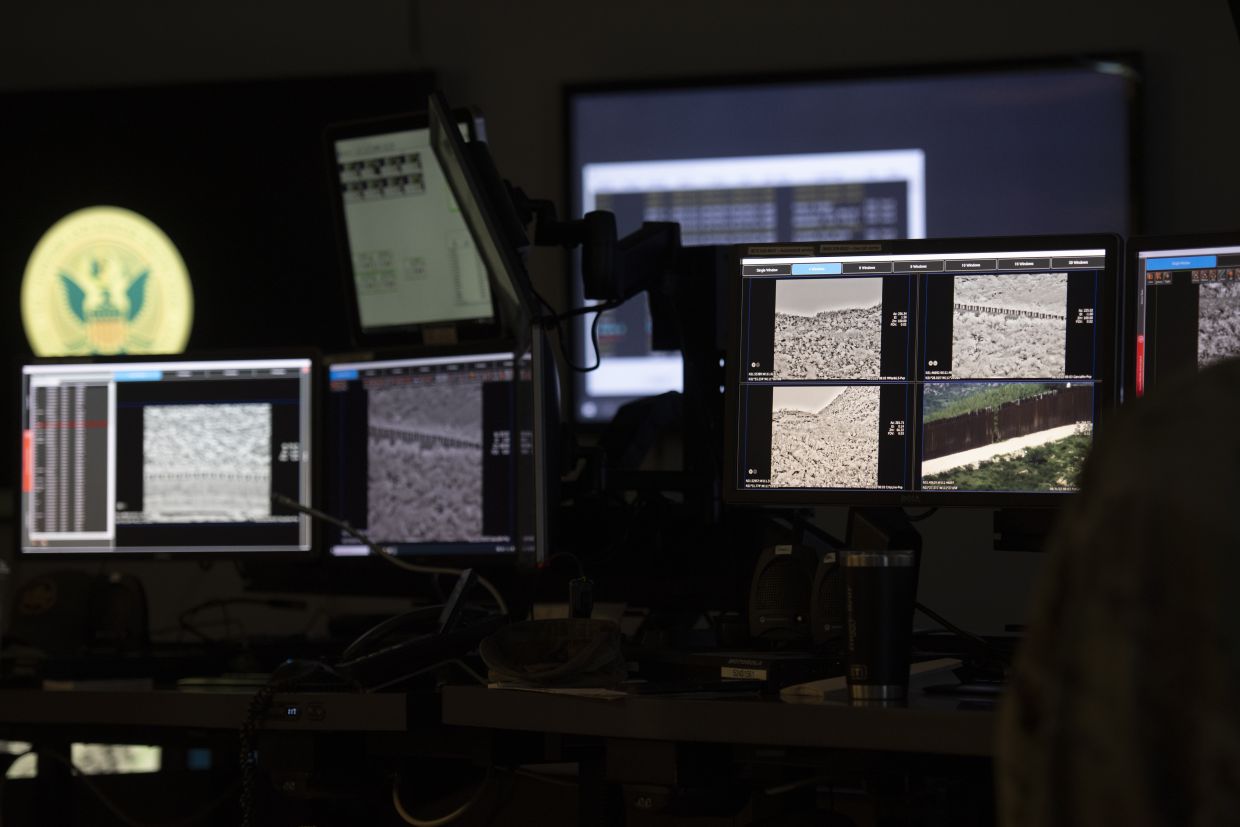 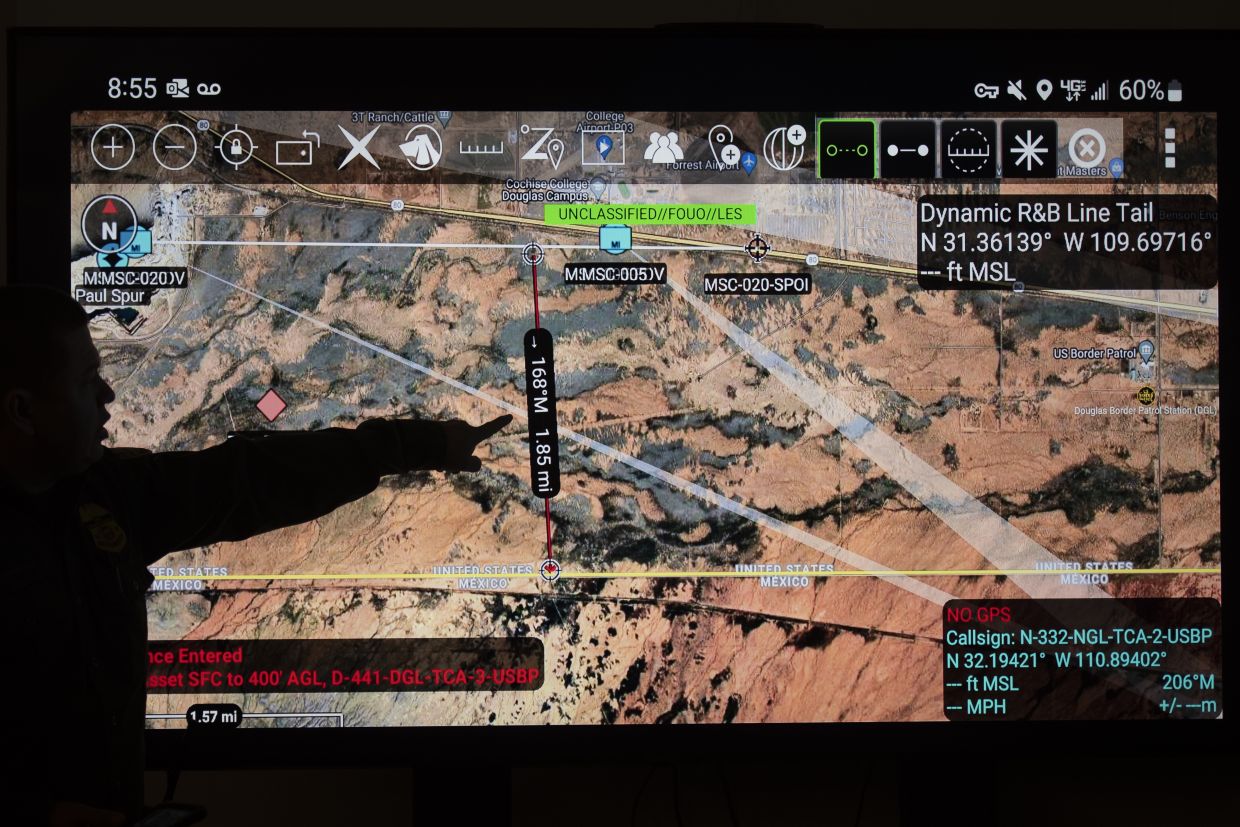 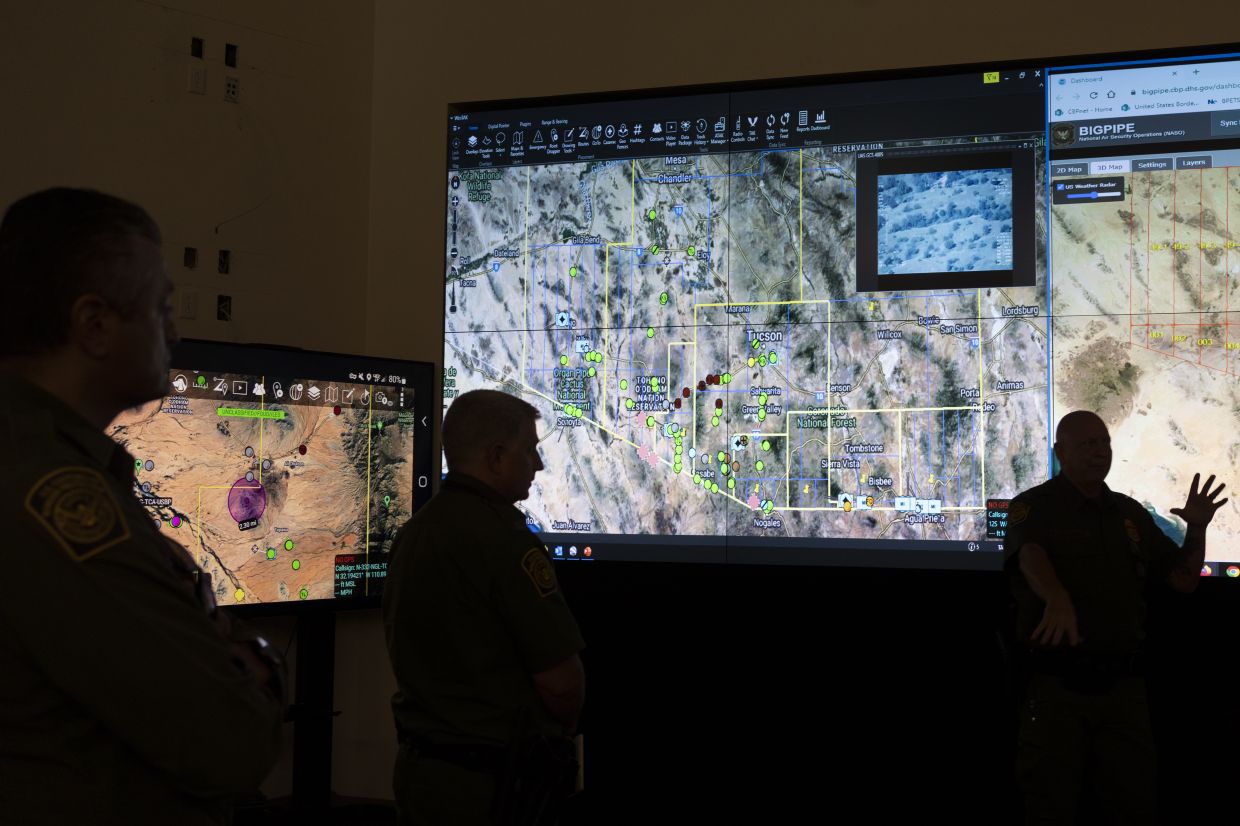 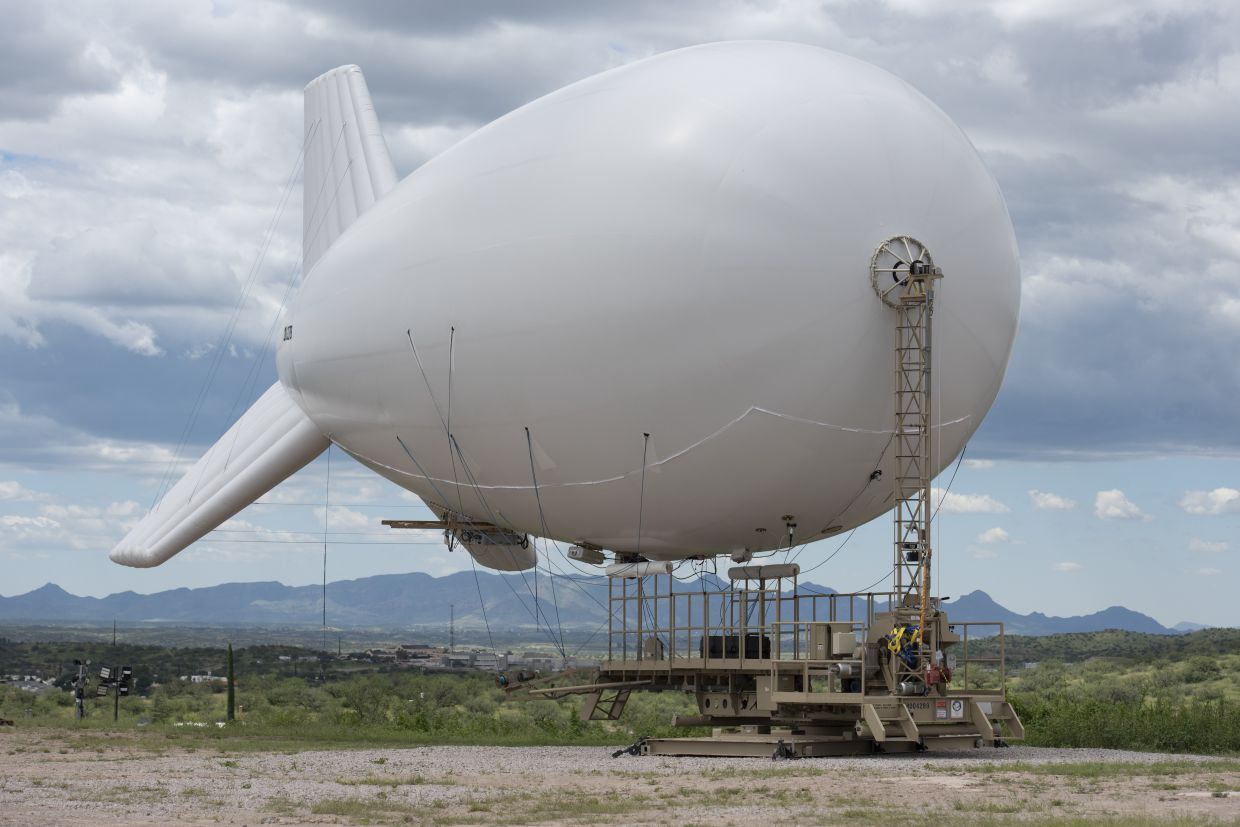 The camera apparatus on a Mobile Video Surveillance System scans the borderlands in Nogales, Arizona, US. — Thomson Reuters Foundation 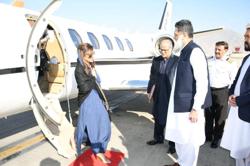