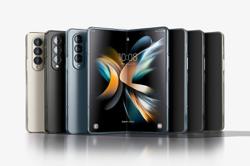 With a Snapdragon 8+ Gen 1 processor and a 120Hz refresh rate, the Flip 4 feels like the most responsive device I've ever had. — CHRISTOPHER FAM/The Star

When I first learned that I’d be reviewing the Galaxy Z Flip 4, I was thrilled since it was going to be my first foldable phone, and in the short time that I’ve had it, I’m convinced that it’s not just a gimmick.

At first, I figured that lugging it around would be a pain because of its thicker profile, but it ended up fitting just fine in my pocket, and that extra bit of screen real estate made the experience worthwhile.

The 6.7in screen will be more than just a step up in size for most, especially with the Amoled display producing better blacks and vibrant colours.

This made content consumption on the device an absolute treat, particularly for movies and videos in an ultra-wide aspect ratio.

The Flip 4 also supports Dolby Atmos, and I was blown away by the speaker setup, having genuinely not expected it to sound this good.

The smaller 1.9in Super Amoled Cover Screen was nice to have too, which I used mostly to check the time and skip tracks when playing music, though there are other widgets such as the calendar and weather for people who are into that. 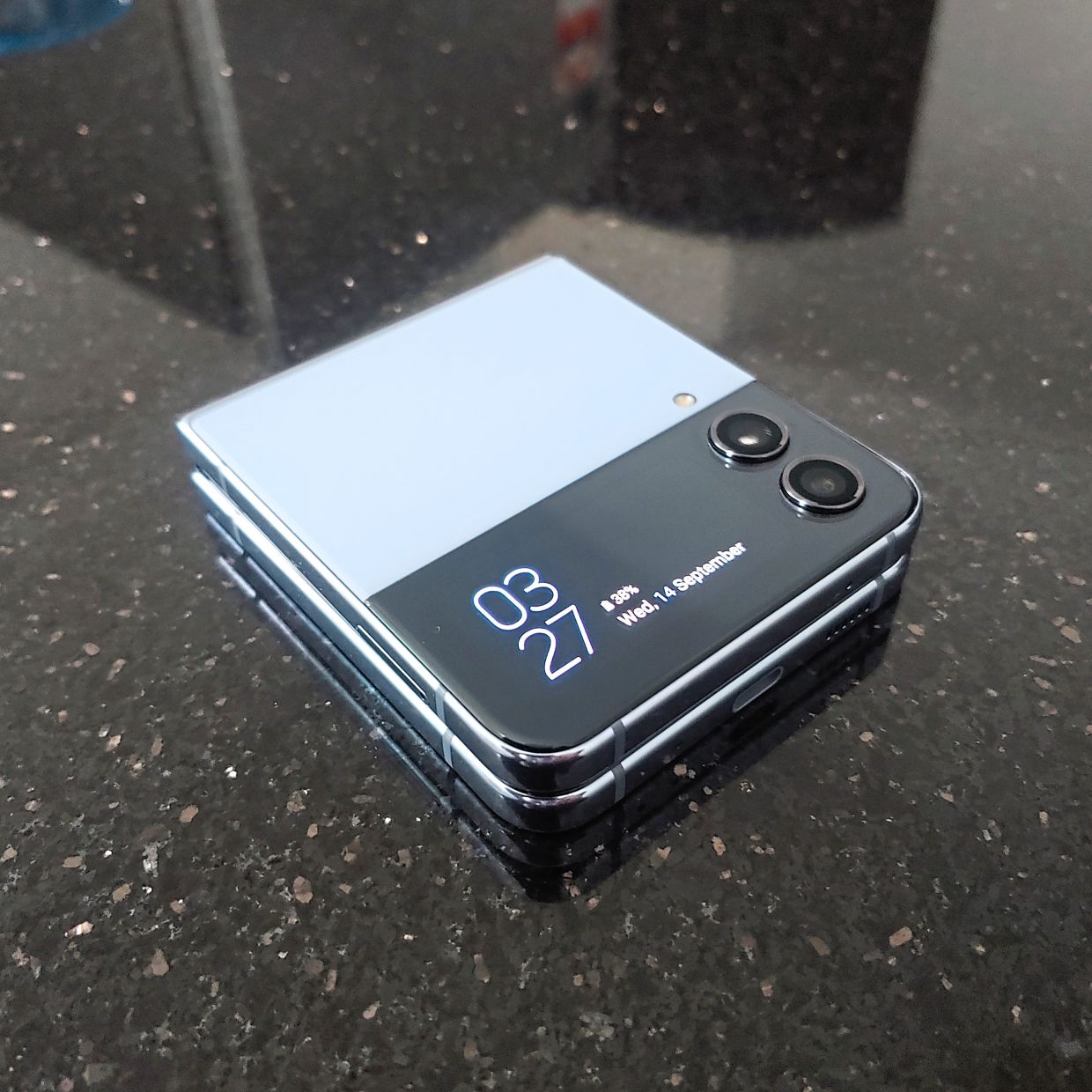 I mostly used the Cover Screen to check the time and skip tracks when playing music, though there's also other widgets for things like a calendar and the weather as well. — CHRISTOPHER FAM/The Star

But no conversation about a foldable is complete without addressing the hinge crease on the screen. When viewing content and playing games, it basically vanished from sight and could only be seen at off-centre angles.

The split-screen view also makes a return with the Flip 4, which further hides the crease when multitasking between apps. When viewing content and playing games, the hinge crease basically vanished from sight and could only be seen at off-centre angles.

Samsung wisely enabled the split keyboard setting by default when in landscape mode, which makes a lot of sense considering the standard keyboard ends up being centred.

Overall, the device wasn’t much of a fingerprint magnet, which was helped in part due to the matte satin-like back – which feels good in the hand.

Fans will love the camera-related features, with the FlexCam mode being my favourite for hands-free picture taking. 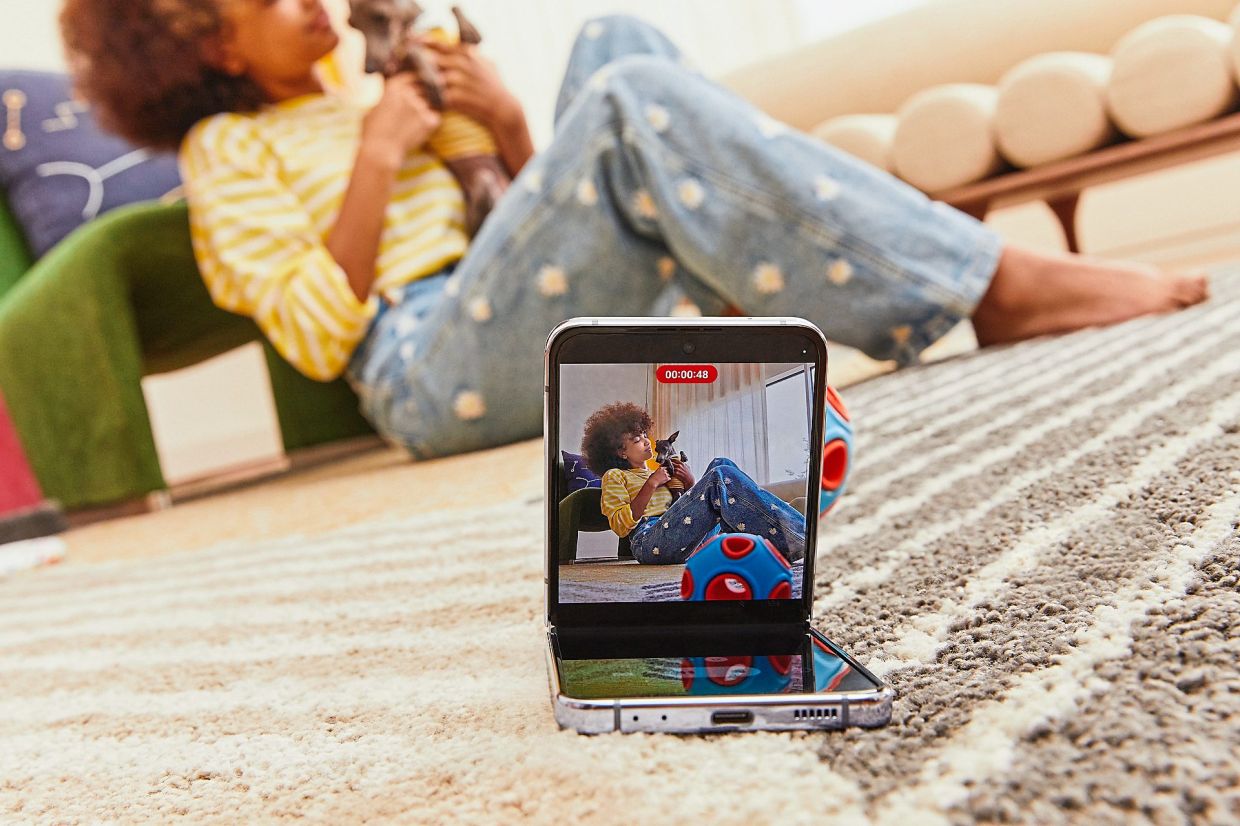 Keeping the Flip 4 folded partway will activate Flex mode, allowing the hinge to act as a stand for picture taking without needing someone to actually hold the device to take the shot.

This is when the Cover Screen comes in handy, as it can be activated to offer a preview of selfies and group photos while the primary cameras take higher-definition shots. Avid picture-takers will definitely find the Flex mode and cover screen preview features a treat when using the camera. — Samsung

This feature also allows users to take pictures and record videos while the device is completely shut via the Cover Screen.

And for added nostalgia, the mode allows users to hold the device like they would a camcorder when the phone is partially folded. 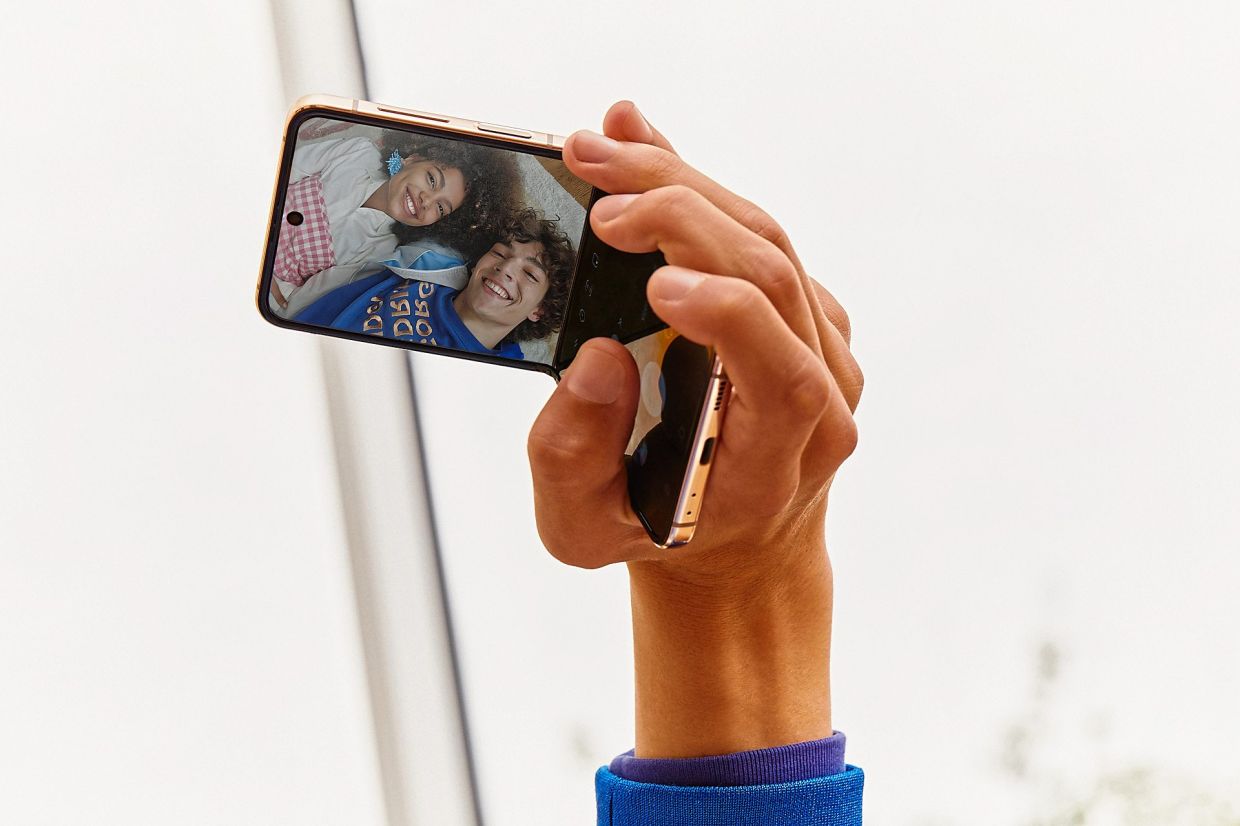 The Flex mode feature also allows for users to hold the device like they would a camcorder when the phone is partially folded. — Samsung

Other features include Samsung’s Pro mode – allowing for more control over things like shutter speed and colour temperature in both video and picture taking – along with options for night photography, which boosts low-light performance, and food photography, which enhances the Bokeh effect.

The Flip 4 is powered by a Snapdragon 8+ Gen 1 flagship processor and feels like the most responsive device I’ve ever had, though the screen’s 120Hz refresh rate likely played a part too.

In my tests, essentially every game I threw at the device ran smoothly, even on the highest settings, though some had teething issues due to the non-standard 22:9 aspect ratio.

Battery life was pretty solid, easily lasting me throughout the day and then some, even while handling everything from social media browsing, taking photos and videos, watching YouTube, and using Waze for navigation. 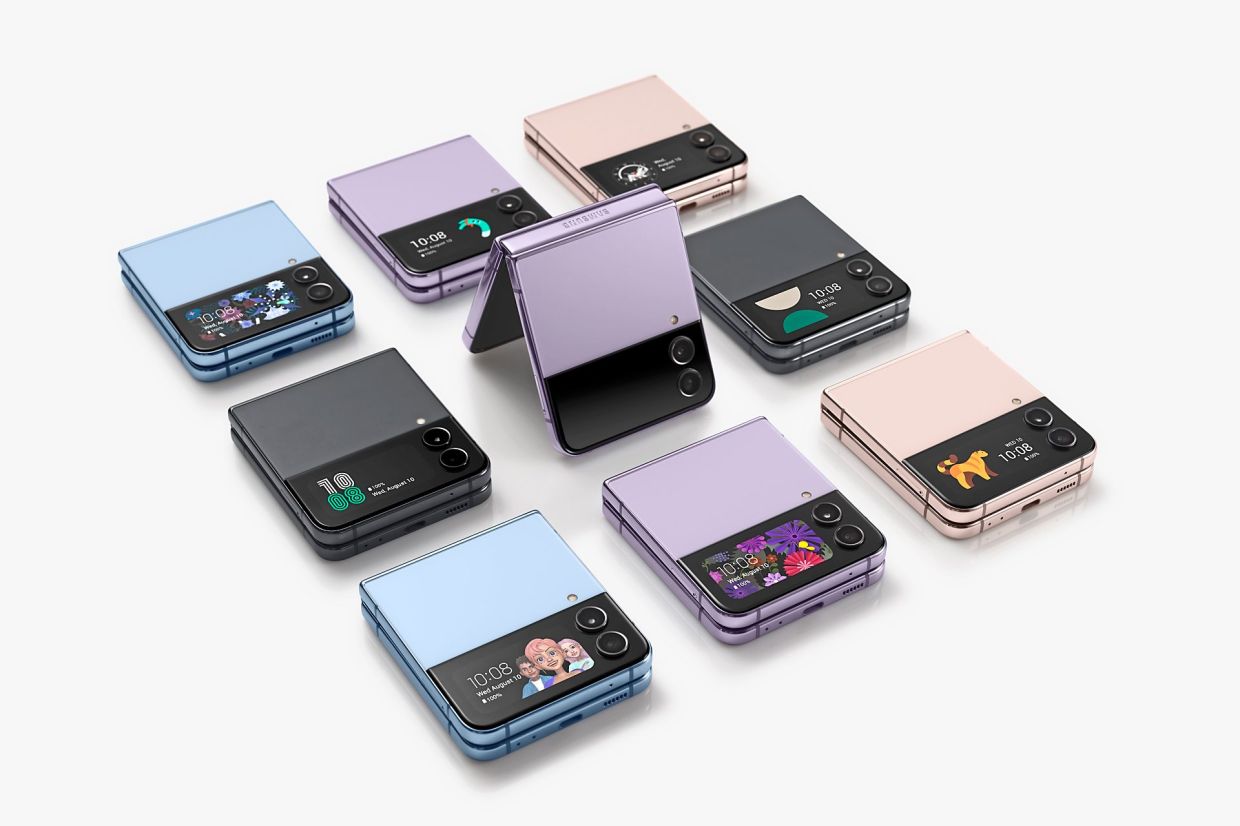 The Samsung Galaxy Z Flip 4 might just be the best entry point into the world of foldables. — Samsung

Not surprisingly, gaming extensively drains battery life, but it’s not an issue thanks to the Super Fast Charging, which only takes 30 minutes to restore the power to 50%.

The smartphone supports Fast Wireless Charging 2.0 and can power up smartphones and earbuds with the PowerShare feature.

As with the previous generations, the Flip 4 does not include a 3.5mm headphone jack, but that is easily solved with a USB-C adaptor.

Living up to the hype

All in all, the Galaxy Z Flip 4 is probably the best entry point into the world of foldable smartphones, coming equipped with all the features expected of a flagship device, with all the flexibility of a foldable. 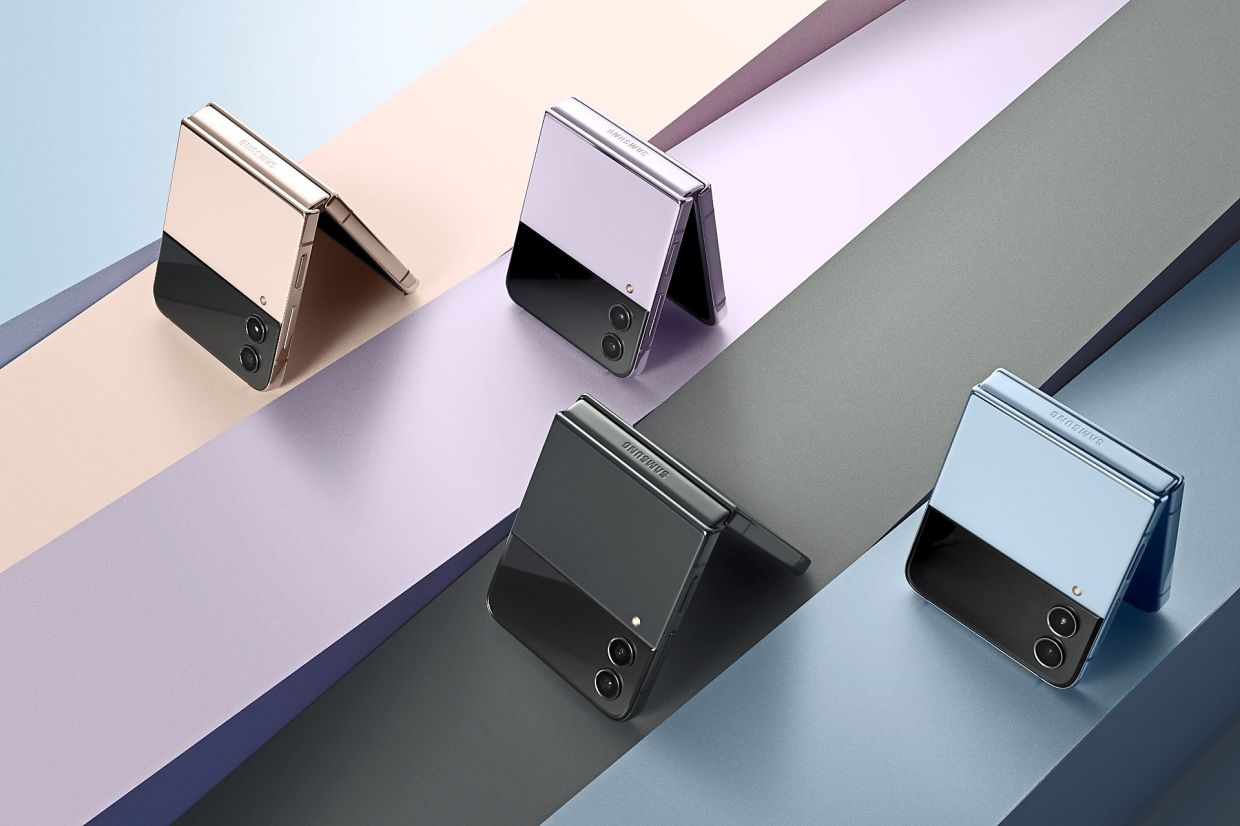 The Flip 4 comes in Bora Purple, Graphite, Pink Gold, and Blue along with a more customisable 'Bespoke' edition. — Samsung

The Z Flip 4 starts at RM4,099 with up to 512GB of storage and comes in four colours – Bora Purple, Graphite, Pink Gold, and Blue – along with a fifth “Bespoke” edition that lets buyers customise the device from a selection of colours.

Samsung Galaxy A80: The one with the rotating camera

Samsung Galaxy Note 10+: A plus phone

Subscribe now to our Premium Plan for an ad-free and unlimited reading experience!
Smartphones Samsung