SAN FRANCISCO: The makers of Pokémon Go want to develop their own new game world next, instead of just bringing old Nintendo characters to life on smartphones.

The new Peridot app recalls the once popular Tamagotchis: You need to take care of, entertain and raise animal figures. Unlike the Tamagotchis, however, Peridots cannot die even if they are poorly cared for, as the developer company Niantic emphasises.

Instead, players can let their adult Peridots mate so that new digital animals are created. Each peridot is unique and this becomes even more obvious with the offspring, says Ziah Fogel, the Niantic manager responsible for the game. For an average player, it will take two to three days to raise a newly hatched Peridot, she said.

With the success of Pokémon Go, Niantic succeeded in establishing a new type of computer game that combines digital content and real environments.

The app unleashed a massive hype after its release in 2016, sending millions around the world into streets to look for virtual animals that could be seen only on their phones using augmented reality.

The initial hype around Pokémon Go has since noticeably died down, but there is still a core group of active players. Some of them spend money in the app and thus continue to provide Niantic with solid revenues.

However, the company has to pay money for the use of the Pokémon characters to their inventors – this also applies to its game Pikmin and an app with content from the Harry Potter universe that has since been discontinued.

Niantic, on the other hand, has full control over the Peridots, which were invented in-house.

In the new game, the figures are also supposed to interact with the environment more naturally than before and, for example, be able to turn corners or disappear behind opaque objects. – dpa

Man proposes with a Pokemon ring in Pokeball box

Put a paw into the ‘petaverse’ with Dogami’s crypto dogs 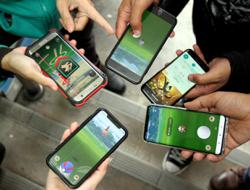