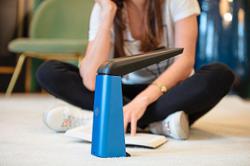 French startup Lexilife, which specialises in designing lamps for dyslexic people, has just unveiled its new connected model, due on sale in 2022. This updated version will let users customise and save their own settings, as well as follow their progress in reading.

Since the release of its first prototype in 2017, Lexilife hasn't stopped improving its product. Its Lexilight lamp for dyslexic people is now available for €549 (around US$640/RM2,656). It uses a technology that combines both pulsed and modulated light, which has the advantage of eliminating the mirror effect that dyslexic people can see. It also considerably reduces eye strain.

The startup is already looking further ahead and is preparing to launch Lexilight 3.0, a connected lamp that will make its debut at the next CES consumer technology show in Las Vegas, before launching on the European market in 2022.

This Lexilight 3.0 is wireless and easily portable. It diffuses pulsed and modulated light thanks to special LEDs. Equipped with a more powerful algorithm than the previous versions, the Lexilight 3.0 emits the same amount of light but is fully customisable. It is announced with an operating time of about 12 hours.

Via an accompanying mobile application (available on Android and iOS), users will be able to set their own settings for pulsation, modulation and light intensity. The app will also let users follow their performance and reading progress, bearing in mind that the Lexilight 3.0 is aimed at dyslexic children as well as adults.

Note that glasses for dyslexic people have already been developed by the startup Abeye, and are marketed by Atol under the name Lexilens, priced €399 (about US$465/RM1,930) for children and €449 (about US$522/RM2,172) for adults. – AFP Relaxnews

What if coughing into your smartphone could save your life?