A resident has a smartphone photo taken as she receives a dose of the Pfizer-BioNTech Comirnaty branded Covid-19 vaccine at a mass vaccination site at Athlone Stadium in Cape Town, South Africa, on Friday, Aug 20, 2021. In recent months, you likely have been bombarded with inaccurate or misleading information regarding the efficacy and safety of vaccines, created by bad actors on the Internet and later shared by friends, family, celebrities, influencers and politicians all over Facebook, Twitter, Instagram and other social platforms. — Bloomberg

Believe it or not, you may have more power in getting others vaccinated against Covid-19 than scientists.

In recent years, social media research and large-scale social network experiments have shown that family and friends could be more effective than public health officials in terms of directing useful information to those around us, largely because we tend to trust knowledgeable people who are close to us and can tailor our messaging to better connect with loved ones.

Indeed, a sibling or a friend online or next door is in some ways better able to underscore the importance of behaviours such as masking and physical distancing than public health agencies or experts such as (Dr. Anthony) Fauci. It's not only that we trust information from knowledgeable people who are close to us but that those in our lives can find opportune moments to explain why preventive behaviours are important to them and why they trust the science that says those actions reduce the spread of the virus.

A neighbour or a friend can respond with messages tailored to a person's interests and concerns. In addition to correcting misconceptions in real time, a confidant can create an environment inhospitable to misinformation in the first place. Finally, and critically, deception and debunking usually occur in different venues: those who are exposed to misconceptions rarely encounter the fact-checks.

In other words, you and I have a part to play in championing the truth. And it's a good thing we have that power, because the Internet today is a Wild West, where false information thrives as well as true information, and can lead to dire real-life consequences.

That especially has been true when it comes to Covid-19 vaccines. In recent months, you likely have been bombarded with inaccurate or misleading information regarding the efficacy and safety of vaccines, created by bad actors on the Internet and later shared by friends, family, celebrities, influencers and politicians all over Facebook, Twitter, Instagram and other social platforms. This misinformation — sometimes purposefully manufactured to influence you, which is called disinformation — has played a role in tens of millions of Americans electing not to receive a vaccine.

So you might be wondering: How do I deal with this? How do I spot misinformation (and disinformation) on social media, and how can I fight it? Glad you asked. Here are some strategies to employ as you peruse social media and the Internet at large going forward.

If there is one rule you should follow when it comes to using the Internet and social media, it's this: Don't believe everything you read.

"Just don't buy into it immediately," said Keenan Chen, a research reporter for First Draft, a non-profit coalition founded in 2015 to protect communities from misinformation campaigns.

You must treat everything with a healthy level of scepticism. We're not saying assume everything's false until proven otherwise; just consider the possibility that it could be.

This means double-checking the claims on that meme your uncle shared on Facebook (by searching the claims on Google to see where they might be coming from), or doing a reverse image search on that unbelievable photo your friend retweeted on Twitter (by going to google.com/imghp and "searching" the image to find its original source). Closely look at links, and verify websites you've never heard of so you ensure it's coming from a reliable source. Some of these websites don't even have "About Us" pages, which is a major red flag.

Even if the story is from a reputable news source, read beyond the headline because, unfortunately, some headlines tend to inadvertently amplify false claims.

And lastly, "understand the motive," Chen said. Remember that the most popular and engaging posts on social media tend to stir up some form of emotion inside you, whether it's happiness, sadness, anger, nostalgia, etc. So take a beat before making a knee-jerk reaction when you see something emotional online.

"Those websites you see with volatile headlines, that's usually where the unreliable information comes from," Chen said.

Do your own research

If you see something on social media you think might be false or misleading, consider the source.

Who's sharing it? Where is the reporting coming from? What website is saying it? Are there other reputable websites backing it up?

If it's a person, try Googling their name and seeing what you find. If it's a website, see what else they're reporting and what their "About Us" page looks like. Google and Wikipedia are your friends; use them to search for names of people and organisations who are making the claims.

Keep in mind that a common strategy in disinformation campaigns is offering a "kernel of truth" in posting false or misleading information. So while something in the claim might technically be true, that truth could be twisted into something false.

So you've seen a claim on social media and you did your research to find out it's inaccurate (or misleading). What should you do next?

Chen offers one thing you shouldn't do: Share it.

"It may sound unrealistic, but don't easily share posts on social media," he said. "By sharing it, you are making it more viral and reaching out to more people (with the false information)."

Some well-intentioned social media users will share a false claim or a bad headline so they can "dunk" on it, especially on Twitter, where the quote-tweet function makes it quite easy to mock, disparage or attack others. But in the grand scheme of things, that tends to backfire because the false claim or bad headline is amplified by users sharing it, especially if they don't respond with an alternative or an explanation.

So what can you do instead?

Let your friends and family know

When a loved one of yours is buying into a false narrative online, or is sharing misleading or false information in some fashion, approaching them in a non-confrontational way about why it's wrong is ideal, Chen said.

"Be patient, be a good friend (or family member), and explain why that's not true," Chen said. "You could say, 'I can show you something that scientists say that...' or some other way. Just don't be confrontational."

Back up your claims by offering links and resources from reputable places. Practice empathy and listen to their concerns. Acknowledge that you don't have the answer to every question — "sometimes, fact-checkers will say something is true or false but cannot explain why," Chen said. It's not easy, and it may not always work, but it's better than letting a potentially dangerous belief go unchecked.

Remember, you may have more power in getting the people around you vaccinated than scientists. So use social media in a way that properly debunks false information with effective fact-checking. – Detroit Free Press/Tribune News Service

These US doctors and nurses share Covid-19 falsehoods. They can become misinformation superspreaders 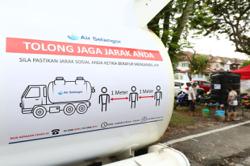